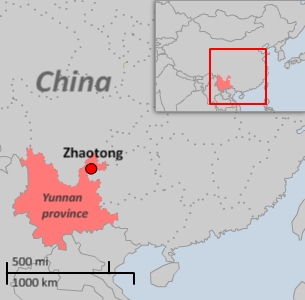 Thousands of people rioted in the streets of Zhaotong city on Nov. 2, 2010.
RFA

HONG KONG—Authorities in the southwestern Chinese province of Yunnan said they are launching an investigation after violent clashes between police and local residents blocking construction of a new highway.

"Everything has quietened down now," an official surnamed Liu in a local government office in Yunnan's Zhaotong city said Nov. 3.

He said the incident was now being investigated by a local task force.

"They are still dealing with it, and we will hold a news conference when there is some information," said the official from Zhaoyang district, where the clashes took place.

Liu said 10 police officers were injured during the clashes, and that three police vehicles had been set alight by protesters.

Work had restarted at the construction site of the new highway, local residents and officials said.

The clashes began on Tuesday at 1 p.m. local time when workers showed up to begin work on the highway, construction of which was announced by the government in April, local residents said.

"It was all because the level of compensation paid for the land was too low," said a local resident surnamed Sun. "It was unreasonable."

He said the authorities grabbed the land without villagers' consent to the compensation arrangements.

"Our livelihoods suffered a serious blow, and there were no safeguards," Sun added.

A second resident of Zhaoyang district said the clashes had taken place in his neighborhood.

"It was because of land ... something about unreasonable levels of compensation," he said.

An officer who answered the phone at the local police station declined to give details.

"All of this is being taken care of by our local leaders," he said. "They know what is going on, and they are dealing with it now."

According to the Economic Observer website, construction on the highway site was blocked on Tuesday by around 200 local residents carrying sickles and hoes.

In the resulting clashes, rioters destroyed 48 vehicles, 14 of them by burning, and 23 construction workers sustained injuries of various kinds.

Protests on the rise

Qiu Feng, editor of the Defending Rights [in] China website (wqzgw.com), said that evictions and land protests are on the rise across China, as people begin to realize that the law offers them little protection when dealing with powerful local officials.

"There seems to be no one in the judiciary who will protect the interests of the ordinary people," Qiu said.

"Most of the time, land acquisitions go ahead without the need for consent from local people."

And Yang Lili, editor of the U.S.-based Observe China website, said that authorities have tried to keep the lid on news of eviction clashes.

"There have been more and more of this sort of incident in the past couple of years," Yang said. "They have continued to control what people can say about it."

"There is no other way, no other place, for them to vent their anger ... If they use legal channels, such as petitioning, they will be locked up and escorted home."

"It is inevitable that people are now beginning to resort to acts of extreme violence," Yang said.

Land acquisition for development, often resulting in lucrative property deals for local officials, sparks thousands of protests by local communities across China every month, many of which escalate into clashes with police.

Many petitioners who use official channels to complain—often over loss of land, poor compensation, or forced eviction from their homes—are escorted back home, where they can face beatings, surveillance, and further detention.

Reported in Cantonese by Fung Yat-yiu, and in Mandarin by He Ping. Translated and written in English by Luisetta Mudie.