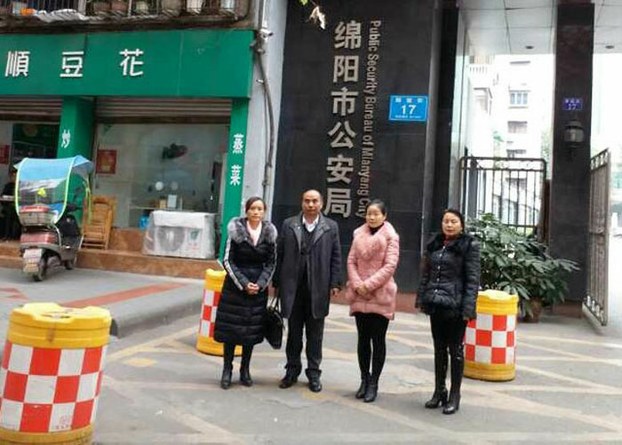 Two major Chinese-language rights websites hosted overseas appear to have been targeted by hackers in recent days, after authoritiesdetained the founder of one of them.Volunteers at the Tianwang rights website founded by Sichuan-based activist Huang Qi, who is currently detained on suspicion of "illegally supplying state secrets overseas," said they are currently unable to access the site to publish new articles, even though it continues to display externally."We can't get into it, because we can't get into his desktop; it's just a blank screen. There's nothing left; it has all collapsed," a volunteer surnamed Zhou told RFA on Friday.She said Huang is the only person who could provide the necessary passwords to access the site, which appeared not to have been updated since the end of November when accessed by RFA on Friday."The government probably has something to do with this, because nobody can get into the website except Huang Qi, because he's the only one who knows the password," Zhou said."Maybe [Huang Qi] is under some kind of pressure, and has shut down his own website," she said.Tianwang's technical expert Pu Fei declined to comment in detail when contacted by RFA on Friday."I don't know about this, and it's not convenient for me to talk right now," Pu said, using a euphemism that commonly indicates police presence or monitoring."I can't really discuss anything to do with Huang Qi's case with anyone outside," he said.Lawyer can't meet Huang

Huang's defense lawyer Li Jinglin said he had been prevented from meeting with his client when he arrived at the police-run Mianyang Detention Center."The police officer who saw me at the Mianyang Detention Center said that any visits would have to be approved by the Mianyang municipal police department," Li said."But when I asked him who was in charge of the case at the department, he said he didn't know."Li went to the Mianyang police department, where he requested permission to visit Huang."But they told me I would have to wait for a written response from them, so I left my address and telephone number, and now I'm waiting," Li said.Fellow activists said Tianwang had played a long-running role supporting ordinary people attempting to defend their personal rights in the face of government actions."The Tianwang website works to support basic rights, justice and the law, and its founder Huang Qi is now under coercive measures at the hands of the local police once more," Sichuan-based rights activist Huang Xiaomin told RFA."Even his mother has had her life disrupted, and this all happened pretty suddenly," he said.

Forced to hand over password?Meanwhile, the overseas-hosted Canyu.org website, which carried similar content to Tianwang, was completely unavailable on Friday, returning only an error message.Following a diversion message from CloudFlare, which defends against distributed denial of service (DDoS) attacks, the site returned the message: "The web server is not returning a connection. As a result, the web page is not displaying."Guangdong-based online activist Jia Pin said both Tianwang and Canyu.org are hosted on overseas servers, beyond the immediate reach of Chinese internet censors."Tianwang is an overseas website, so you have to get over the Great Firewall," Jia said, referring to the complex system of blocks, filters and human censorship that limits what Chinese internet users can see online."It would be very hard to hack it, and if the Chinese government was able to do that, they probably would have done it long ago," he said. "They wouldn't wait until Huang Qi was detained."But he added: "It's possible that they have forced Huang Qi to give them the password."And in neighboring Hubei province, the founder of the Civil Rights and Livelihood Watch rights website is still being denied permission to meet with his lawyer.Website founder Liu Feiyue, who is being held on suspicion of "incitement to subvert state power" in the Suizhou No. 1 Detention Center, is being held incommunicado, his lawyer Wen Donghai told RFA."It's because the charge has to do with state security, so no lawyer visits are allowed without permission from the investigating authorities," Wen said.Liu's website appeared to be functioning normally when accessed by RFA on Friday, however.Reported by Wong Lok-to for RFA's Cantonese Service, and by Xin Lin for the Mandarin Service. Translated and written in English by Luisetta Mudie.