The head of China's judiciary calls on courts to maintain social stability amid the economic crisis.
2008-12-22
Tweet 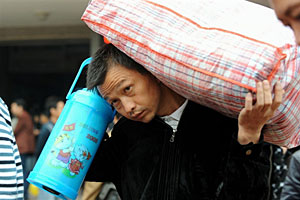 A migrant laborer returns to his home in Anhui province after being laid off from his job in Guangdong, Nov. 7, 2008.
AFP

HONG KONG—As waves of laid-off migrant workers continue to head home from China's once-booming coastal cities, the authorities are bracing for a winter of discontent sparked by the global economic downturn.

Wang Shengjun, president of the Supreme People's Court (SPC), called at an annual conference of China's top judicial officials for courts to maintain social stability amid the global economic slowdown.

"The most urgent task is to resolve economic, civil, and administrative disputes caused by the financial crisis," Wang told the conference, citing "a large number" of financial disputes in coastal areas.

He said the number of labor disputes had nearly doubled this year, showing an increase of nearly 94 percent in the first 10 months of the year compared with the same period a year earlier.

"We will closely monitor issues such as corporate bankruptcies, labor disputes, and breaches of contract, as well as enforcement issues brought about by the financial crisis," Wang was quoted as saying by China's official English-language China Daily newspaper.

And as the chief prosecutor urged procuratorate officials to take steps to protect company assets, such as "sealing off property" during disputes, clashes broke out Saturday between police and protesters after officials tried to take possession of land in Nandayuan village, in the northern city of Baoding.

"In the early hours of the morning, around 3,200 people from the village government, the district government, the Nandayuan police station, and employees of property developers Changcheng arrived at the plot of land, at about 4 a.m.," a villager surnamed Cheng said.

"They brought steel fencing, which they used to cordon off the area. At about 8 a.m. we villagers went over there to try to stop them, and that's when the clashes happened. They carried on until 4 p.m. that afternoon."

He said two people were injured in the standoff, including the deputy head of the village government.

An official who answered the phone at the Nandayuan village government confirmed the incident had taken place.

"Yes, it was about the acquisition of land ... It's all over now. The area was cleared on [Saturday] ... A lot of people went because the area they had to cover was so large."

"Nobody raised a hand. But there were some local people who tried to prevent the workers from getting to the site. No, no one was hurt," he added.

At the judicial conference in Beijing, Cao Jianming, procurator-general of China's state prosecutor, the Supreme People's Procuratorate, called for "effective measures" in dealing with economic disputes.

"Steps such as sealing up properties, freezing assets, and detaining and arresting individuals, must be carefully taken to ensure firms' lawful rights and interests are safeguarded, and that the negative effects of disputes are minimized," he said.

Wang called on judges to "try every means to find a win-win or even multiple-win solution for all parties in cases related to the financial crisis."

In the southern industrial city of Dongguan, which has seen a growing number of protests by workers demanding back pay and severance benefits since the global crisis began to bite in summer, laid-off workers painted a bleak picture of life after the downturn.

Huang Zhonglin arrived in Dongguan from Ducheng township in the eastern province of Jiangxi in 1997, and quickly found work in a Hong Kong-invested textile factory.

"I was always a very good performer," Huang said. "But in February I was fired suddenly, through no fault of my own."

Huang says she is owed severance benefits of 50,000 yuan under China's labor laws. But she has never received anything.

An attempt to sue her former employer for the money was recently rejected by local courts, she added.

Huang's lawyer Xiao Qingshan, who runs a free legal advice service for Dongguan-based workers, said he saw the decision as an attack on him by judicial officials at the Dongguan Municipal Intermediate People's Court, who wanted him to leave the city.

"They want to force me to leave Dongguan altogether," Xiao said. "Because I write articles every day that expose the truth about what is happening here, and post them online. They hate me, because I make them look bad."

"If people see that I always lose my cases, then they won't seek me out to represent them any more," he said. "I used to win all my cases."

An official on duty at the Dongguan municipal labor affairs bureau said that in cases of allegedly unpaid benefits, the aggrieved party has  the right to lodge an appeal with the local courts.

Another laid-off worker, Wang Zhigui, from Chongyang county in the central province of Hubei, said he was ill-treated by his employer.

Wang said he had worked for three months but received no salary and has never had enough money to leave the city.

He said he was beaten several times by police because he lacked temporary resident papers to remain in Dongguan and spent nine months in a detention center, where he said he saw two detainees—migrant workers like himself—beaten to death.

"It would happen every week," he said of the detention center.

"It was always police from different police stations. They would punch me and kick me. The worst thing they used to do was get a freezing cold bucket of water and throw it over me in the middle of winter."

"They treated us as if we weren't human. They would beat us up whenever they felt like it," Wang added.

He said he saw two people beaten to death in front of him while in the detention center, one of them from his hometown, who had also been a colleague at the factory.

"We had worked together at the same place," Wang said.

"His health was better than mine. He had one-year-old child and another baby just born. The baby was two months old. He had just written to his wife, promising to be at home for the birth of the baby. No sooner was the baby born than his wife got a telegram saying that her husband was dead."

Riot police with helmets and shields were called in and sealed off a factory compound belonging to the Jianrong Suitcase Factory in Dongguan on Friday after the firm closed without warning, giving its workers only 60 percent of promised October-December wages.

Police blocked the workers, who live in dormitories inside, from leaving.

The plan appeared to be to keep them from protesting outside the factory until they collected their final wages and left for the holiday.

But a group of around 100 workers broke through the cordon, shouting slogans including "There are no human rights here!"