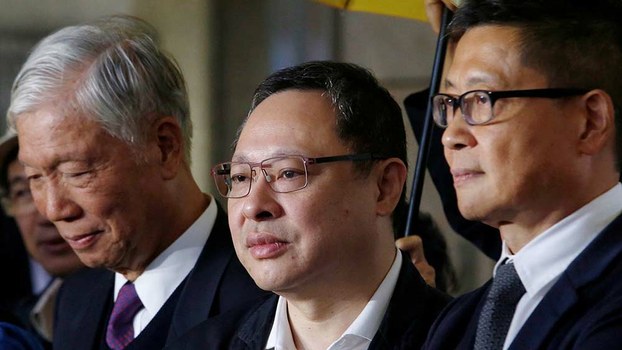 Benny Tai (C) at a press conference in Hong Kong in November 2018.

Hong Kong's trial of nine pro-democracy activists accused of "inciting" the 2014 Occupy Central movement has ended, with a verdict to be handed down in April.

The District Court said on Friday it will announce its ruling on April 9, on whether the nine defendants, including movement initiators Benny Tai, Chan Kin-man and the Rev. Chu Yiu-ming had caused a "public nuisance" by encouraging the protests.

The nine defendants, who also include barrister and lawmaker Tanya Chan, former lawmaker Lee Wing-tat and democracy activists Eason Chung, Raphael Wong and Tommy Cheung, argued that a reasonable member of the public would be tolerant of the protests, owing to the importance of the movement for fully democratic elections that had been ruled out by Beijing.

All nine pleaded "not guilty."

But the prosecution argued that the worthiness of the protests was irrelevant to the case against the nine, and that the court should base its finding on the facts, including the extent of obstruction to the public from the use of major highways.

The protests calling for universal suffrage grew out of a week-long student strike following an Aug. 31, 2014 ruling from China's National People's Congress (NPC) standing committee insisting on the vetting of electoral candidates if universal suffrage was to go ahead.

The ruling was also rejected by pan-democratic lawmakers as "fake universal suffrage."

In June 2014, an unofficial referendum saw 400,000 people vote in favor of universal suffrage and unrestricted nominations, in spite of a central government white paper spelling out that the city's autonomy was still subject to the will of Beijing, and didn't constitute full autonomy or decentralized power.

Protesters broke through into the shuttered-off Civic Square outside government headquarters on Sept. 27, bringing thousands of protesters onto the streets of nearby Admiralty.

Public anger soared when police used tear gas, batons and pepper spray against unarmed protesters on Sept. 28, bringing hundreds of thousands of people onto the city's streets at its height, many of them calling for fully democratic elections.

Hong Kong was promised the continuation of its existing freedoms of press, publication and association, as well as a separate and independent judiciary, under the terms of its 1997 return to Chinese rule, within the "one country, two systems" framework agreed between British and Chinese officials and enshrined in its miniconstitution, the Basic Law.

But the city's freedom and autonomy are now being eroded in the wake of repeated interventions in the city’s political life by Beijing, according to overseas governments and human rights organizations.

Occupy co-founder Benny Tai said there would be a strong and obvious "chilling effect" if the court convicted the nine defendants.

"It is clear to everyone and the world that the people will be under pressure if we are convicted," he told reporters outside the court after the trial concluded on Thursday.

"In the future, you may be charged with all kinds of crazy offenses and actually people would not talk about things that they worry about," Tai warned, in comments aired by government broadcaster RTHK. "The chilling effect is clear and I hope the judge will be able to see that."

Each charge against the nine defendants carries a maximum sentence of seven years' imprisonment.

Tai, who has been targeted by a smear campaign in the pro-Beijing press after he discussed the hypothetical notion of independence for Hong Kong at an academic forum, told the court earlier this week that he didn't fear going to jail.

At the start of the trial, British MPs condemned the use of criminal charges to intimidate and silence pro-democracy figures, noting that more than 100 pro-democracy protesters have been charged, and many jailed, on the basis of common law charges which curtail freedom of expression and have been criticized by the United Nations Human Rights Committee.

This year's trial comes after Wong and fellow Occupy leaders Nathan Law and Alex Chow were found guilty of public order offenses in July 2017 for their role in the occupation of Civic Square at the start of the movement.

Wong and Chow were convicted of "unlawful assembly" after they climbed into the fenced-off area outside government headquarters on the night of Sept. 26, 2014, at the start of a 79-day civil disobedience campaign for universal suffrage.

They were jailed after a retrial at the request of the justice department, which said their non-custodial sentences were too lenient, but were later released on appeal.

U.S. and U.K. officials have warned that growing political interference from Beijing is eroding the city's promised autonomy, known as the "one country, two systems" framework.

The cross-border detentions of five Hong Kong booksellers, and the barring of six directly elected pro-democracy lawmakers after Beijing intervened to rule their oaths of allegiance invalid have also thrown up doubts about the city's judicial independence.

Reported by Gao Feng for RFA's Mandarin Service, and by the Cantonese Service. Translated and edited by Luisetta Mudie.