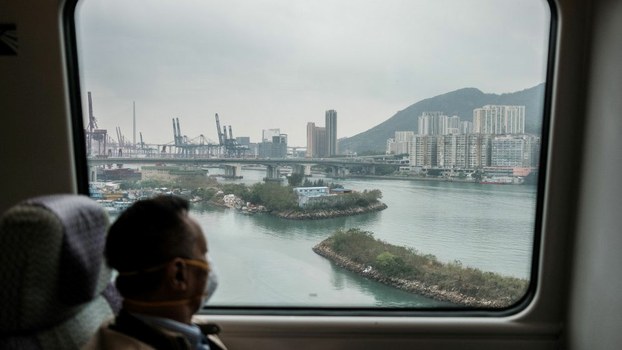 A passenger wears a face mask as a precautionary measure against the COVID-19 coronavirus as he travels on the city-linked train to Hong Kong’s international airport, March 19, 2020.

A top medical adviser in Hong Kong has withdrawn an article in which he said there was nothing wrong with calling the coronavirus the "Wuhan virus," a view that is anathema to the ruling Chinese Communist Party, which is waging a propaganda campaign to distance itself from the virus.

University of Hong Kong microbiologist Yuen Kwok-yung said in a retraction statement on Thursday that he didn't wish to be "involved in politics."

"The expression in the article was inappropriate, wordings were even inaccurate, it’s not the original intention," Yuen said in a statement published by the Ming Pao newspaper, which originally ran the article.

"We hope that people will make space for us to do our research and won't try to involve us in politics," Yuen's retraction statement said.

Yuen authored the article, which called for an end to the trade in wildlife for food, along with fellow microbiologist and university colleague David Lung.

"Excessively killing and eating wildlife, treating animals inhumanely, disrespecting lives … the ugly habits of Chinese people are the root of origin of the virus," the authors wrote.

"With these attitudes, we'll be seeing the emergence of SARS 3.0 in another 10 years," they wrote.

The article also rejected current rumors that the virus came from the U.S., an idea, propagated by some Chinese diplomats, that plays into the Chinese Communist Party narrative that the origins of the coronavirus remain "unknown."

Yuen's retraction comes amid an escalating war of words between Washington and Beijing over the origin of the COVID-19 pandemic, with China voicing "strong anger" after repeated comments by U.S. President Donald Trump referring to the pathogen as "the Chinese virus."

China's National People's Congress (NPC) has nevertheless announced a nationwide ban on the trade in wild animals, in the wake of the COVID-19 pandemic which had killed more than 9,000 people and infected nearly 223,000 globally by Thursday.

A Feb. 24 decision by the National People's Congress (NPC) standing committee banned trade in 1,591 protected species listed by the then State Forestry Administration in 2000, including civet cat, bamboo rat, and numerous species of snake.

"The hunting, trading and transportation of wild terrestrial animals for purposes of consumption are banned, according to the decision, which comes after the outbreak of novel coronavirus," the official China Daily newspaper reported.

U.S.-based animal rights and conservation groups say the trade in wildlife is a perfect breeding ground for zoonotic viruses, as dozens of different species are piled into cramped conditions and slaughtered using the same equipment at markets like the now-shuttered Huanan Seafood Market in Wuhan, where the first cluster of COVID-19 cases emerged late last year.

The coronavirus has infected more than 80,000 people in China and killed more than 3,000.

Yuen’s decision late on Wednesday to retract the article from the website of the Ming Pao sparked concerns over diminishing freedom of expression in Hong Kong, which was promised the continuation of its traditional freedoms under the terms of the 1997 handover to China.

"Some pro-government or pro-Beijing people could give you a low or zero score for your research," Wong said. "You could get a low score just because one or two of your peer-reviews are politicized, which would stop you from getting funding."

The Hong Kong government has also been accused of putting pressure on universities and colleges via funding applications.

The authorities withdrew funding for expansion and building work at both the Chinese University of Hong Kong and the Polytechnic University after both universities saw students fight back against attacks by riot police, who fired thousands of canisters of tear gas on both campuses.

Wong said he has also had complaints made against him by students for discussing the 2014 Occupy Central movement, while Occupy Central founder Benny Tai is currently facing a bid to dismiss him from his post at the University of Hong Kong.

Scholars have also been criticized in less obvious ways for publishing articles critical of Beijing.

"Naturally, you can publish freely, but you may suffer revenge or retaliation afterwards ... perhaps by losing your job or being asked not to say anything."

"There is a lot of risk involved if you speak out on banned topics or cross the red lines of the party-state ... or refuse to sing from its hymn-sheet," Lui said.

"You will get people withdrawing [funding and support] and avoiding you if you do sensitive China-related research," he said. "Sometimes your own university will discourage you because they worry about their relationships with the mainland Chinese authorities or their funding."

Reported by Lu Xi and Lau Siu-fung for RFA's Mandarin and Cantonese Services. Translated and edited by Luisetta Mudie.

Since it is the epic failure of the Chinese Communist Party (CCP) that allowed the spread of the disease, we should all call it the 'CCP Virus'. That way there is no race involved and it gives credit to those responsible.

It is what it is. no matter communist china doesn`t want you to say, the whole world know the virus came from china. so we call china virus.