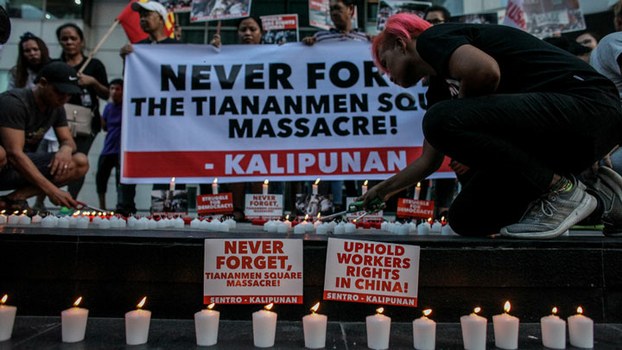 Philippine activists light candles outside the Chinese Embassy in Manila’s financial district to mark the 30th anniversary of the Tiananmen Square massacre, June 4, 2019.

Dozens of Filipino activists lit candles during a peaceful demonstration outside the Chinese embassy in Manila on Tuesday to mark the 30th anniversary of Beijing’s bloody crackdown against pro-democracy protesters in Tiananmen Square.

Members of the Philippine group, which calls itself Sentro, lit candles and carried anti-China banners in front of the embassy in Manila’s financial district. They accused China’s communist government of the “mass murder” on June 4, 1989 of students who were clamoring for democratization, freedom and accountability.

“To this day the casualty count of the event varies,” the group said in a statement. “While official Chinese government estimates would continue to downplay statistics, independent witnesses worldwide would in fact place the number between several hundred and close to 1,000 dead – mostly students and workers.”

Thirty years ago, hundreds, if not thousands, were killed when the Chinese government unleashed the military on unarmed demonstrators at the massive plaza in Beijing fronting the Forbidden City, after weeks of protests, reports said.

The crackdown “halted any attempts at democratizing” Chinese society, the Filipino demonstrators pointed out.

“Any oppressive action that the Beijing politburo has taken under the panoptic eye of President Xi Jinping owes its existence since to the events of Tiananmen,” Sentro’s statement said, expressing solidarity with what it called the rising generation of Chinese citizens, especially activists, who are in prison or are in exile.

“The Chinese Communist Party would rather we forget those who fell in 1989,” it said. “But not us. Never us.”

Francis Pangilinan, a Philippine senator, lawyer and president of the Liberal Party, said he stood in solidarity with “all the freedom-loving people” of China as the world marked the 30th year of that country’s democracy movement.

The massacre at Tiananmen Square remains a “blatant reminder” that people everywhere stand for truth and justice and will fight oppression and tyranny, Sen. Pangilinan said.

“May the image of that young man who stood alone before a column of advancing tanks be forever be etched in our minds – an image of defiance, of determination, of courage to claim our inherent basic human rights and freedoms,” he said.

Responding to a question at the Shangri-La regional security forum in Singapore on Sunday, Chinese Defense Minister Wei Fenghe called the Tiananmen Square crackdown the right decision, pointing to the country’s stability since then.

“The government was decisive in stopping the turbulence, that was the correct policy,” he said.