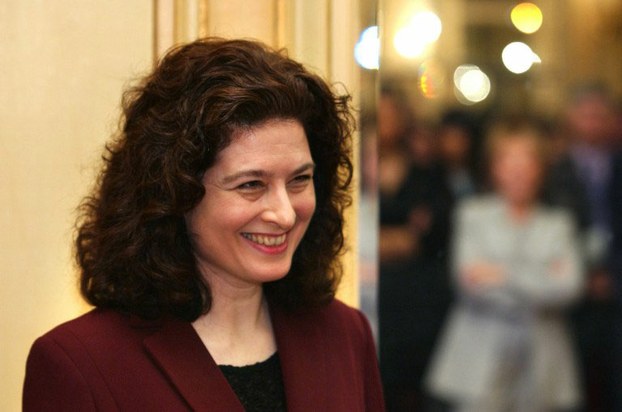 French journalist Ursula Gauthier, expelled from China for her reporting on Xinjiang, is shown in an undated photo.
AFP

As China's parliament passed a controversial new terrorism law on Sunday, police in the southern city of Guangzhou issued orders to be on the alert for "suspects" wearing Islamic symbols who "usually attack after morning prayers."

A directive from the Guangzhou police department dated Dec. 24 announced a terror alert running through Jan. 2, and advised officers of the "distinguishing characteristics of terrorists."

They may possess "long parcels containing knives," wear clothes with "moon-and-star symbols" on them, and "generally attack after morning prayers," the directive, a copy of which was sent to RFA, said.

A hotel employee in the city said they had been ordered to deny hotel rooms to anyone not belonging to the majority Han Chinese ethnic group.

The ban includes the mostly Muslim Uyghur ethnic group from the northwestern region of Xinjiang, where a string of violent incidents have left hundreds dead in recent years.

"If you carry a Xinjiang ID card, you can't [stay here]," the employee said. "Han Chinese are OK, but no other ethnic group." Chinese ID cards must display the ethnic identity of the holder.

"We would definitely welcome guests from Xinjiang here if the police told us that it was OK."

"If they really insist on booking a room, then they have to get in touch with the neighborhood committee and the local police station," the employee said.

The raised level of terror threat, to the lowest degree of yellow, follows increased security in Beijing after several foreign embassies issued warnings of possible terror attacks on foreign nationals in the Chinese capital during the Christmas period, which is not a national holiday in China.

But a security guard working near the diplomatic district in Beijing said there was no ethnic profiling in security checks there.

"They are just very worried that something will happen with so many people around," the guard said. "The security checks don't [just] target people from Xinjiang. They have been tightened up across the board."

China has vowed to crack down on what it calls the "three evils" of terrorism, separatism, and religious extremism in Xinjiang, but experts outside China say that Beijing has exaggerated the threat from Uyghur "separatists,"
and say that domestic policies are responsible for an upsurge in violence that has left hundreds dead since 2012.

Uyghur groups in exile say such attacks are likely expressions of resistance to Beijing’s policies in Xinjiang, where Uyghurs complain of pervasive ethnic discrimination, religious repression, and cultural suppression by China’s communist government.

The recent alerts come as the National People's Congress (NPC) in Beijing passed the country's first Counterterrorism Law requiring "all organizations and individuals ... to assist and cooperate with security departments to fight terrorism."

"This Counterterrorism Law is just an excuse to attack and oppress Uyghurs with no backlash from the international community," Dilxat Raxit, spokesman for the World Uyghur Congress, told RFA.

"Overall, this represents a further boost to law enforcement agencies' powers of surveillance and persecution," he said.

The law, which drew expressions of "serious concerns" from the U.S. government, forces telecommunications and Internet service providers to "offer technological assistance and cooperation with security departments to help prevent and investigate terrorist activities."

The law also requires China's logistics industry to check the identities of anyone sending anything by post or freight, while providing for special restrictions—including travel bans and police controls—on anyone suspected of terrorism.

It said a new nationwide anti-terrorism intelligence center will be set up, while police are now "authorized" to use weapons when faced with "violent attackers with guns or knives."

The law also contains a clause forbidding anyone from disseminating images or information regarding terrorist activities, and authorizes anti-terrorist operations by security forces beyond China's borders.

However, China has hit out at "double standards" on terrorism in overseas media, and its foreign ministry this week refused to renew the working visa of a French journalist who angered Beijing by writing an article critical of its policies in Xinjiang.

Gauthier meanwhile said she had done no such thing.

Gauthier had suggested that a string of violent incidents in Xinjiang could be the result of oppressive policies, and questioned China's motives in expressing sympathy for the victims of the Nov. 13 attacks in Paris.

An anonymous Chinese journalist said Gauthier's expulsion, not the first in recent years, shows that Beijing is constantly expanding its control of the media.

"In the past, we were under this stability maintenance model where red lines were laid down, and if you didn't cross them, they wouldn't go after you," the journalist said.

"Since the new administration [of President Xi Jinping] came to power, they have taken an aggressive stance, so that things that you used to be able to do are now unacceptable."

"They will pick on any excuse to expand their control of the media or online information to an even greater degree," the journalist said.

"It is a wolf in sheep's clothing, which will enable them to step up their controls on freedom of expression and crack down on dissent," he said.

"That's one of the major goals of this legislation."

Professor Xia Ming, of New York's City University, said that Beijing's bid to tie in tensions in Xinjiang with the global fight against terror is dubious.

"Terrorism is being used to achieve certain political goals, to cripple, kill, and harm civilians so as to terrorize and subdue them," Xia said.

"The way China treats its ordinary citizens could be called a form of state-sponsored terrorism," he said.

"Actions taken by ethnic minority groups in China out of anger and protest over government policies should not be defined as terrorism," Xia said.

He said the attempt to reframe tensions in China's ethnic minority regions as terrorism feeds into a vicious cycle.

"Back in the 1980s, ethnic tensions weren't quite as acute as they are today, and the different groups got along reasonably well," he said.

"The highly oppressive policies of today are a factor in making those tensions more acute."

Reported by Qiao Long, Yang Fan and Gao Shan for RFA's Mandarin Service, and by Lin Jing for the Cantonese Service. Translated and written in English by Luisetta Mudie.

Xia Ming is correct that ethnic tensions were much milder in the 1980s PRC because the party-state had not yet frozen itself into a crackdown mode that it has maintained to significant degree ever since the violent 1989 military crackdown on unarmed protesters in Beijing and other cities.