Local authorities in China kept teachers at a low pay grade without benefits or pensions.
2010-12-20
Tweet 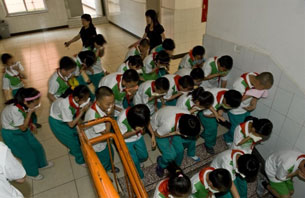 Chinese teachers evacuate students during a safety demonstration in Beijing, May 24, 2010.
AFP

Hundreds of laid-off contract teachers in the city of Zhengzhou in China's central Henan province staged a silent sit-in outside government offices on Monday in protest at their treatment by officials.

"There are more than 2,000 of us here right now," said one protest organizer, surnamed Dong. "People are still arriving on the scene."

He said that between 10 and 20 police had been dispatched to the site of the protest.

"There are police in black uniforms stationed at the main gate of the government compound," Dong said.

A second participant said the protest included retired or laid-off teachers from 18 towns and districts of Zhengzhou, the provincial capital of Henan province.

"We are looking for a meeting with the deputy provincial governor or someone higher than that," the retired teacher said.

"They actually used to have a working group to deal with the affairs of contract teachers, but they haven't spoken to our representatives in years," he said.

Dong said he had been told by a local police officer that the teachers' grievances would be heard by a municipal official. But so far, none had come out, he said.

"Now, the teachers are all sitting in silence outside the main gate waiting for officials to come out and speak to us."

No benefits or pensions

Dong said large numbers of the protesting teachers had been retired or laid off from their contract hire positions during the 1980s and 1990s, with no welfare benefits or pensions.

Now, many of them are sick and unable to get medical help, or are simply unable to support themselves, he said.

"We have no income to live on now, not even a cent," Dong said. "They don't care about us, and they don't want to know."

An employee who answered the phone at the office of a director of the Zhengzhou complaints bureau surnamed Yan said the director was in Beijing.

An official who answered the phone at the complaints bureau declined to comment on the teachers' protest.

"I don't know anything about this," the official said. "You had better go to the scene yourself."

Henan is home to 70-80,000 contract teachers alone, according to rights groups. Many of them were laid off summarily during attempts during the 1980s to reform the education system.

Teachers in China can be hired on civil service or non-civil service contracts, and those on the latter frequently complain of wages that are below a minimum living standard and often go unpaid for months.

Nonstate student teachers in Jiangsu's Pei county, one of the richest counties in China, earn a salary of around 900 yuan (U.S. $135) a month, while more experienced teachers earn 1,200 yuan (U.S. $180) a month, local sources say.

Directive No. 32, issued by the central authorities in 1997, called on local governments to put all teachers on civil service contracts, which carry higher wages and more benefits.

But cash-strapped local authorities have dragged their feet over the new rules, sparking nationwide unrest.

In November, hundreds of contract teachers from two regions of China tried to lobby central authorities in Beijing, although many were detained on their way to the capital.

More than 200 non-civil service teachers from the central province of Hubei arrived at the education ministry Nov. 15 to complain about work conditions, as a similar attempt was launched in the eastern province of Jiangsu.

Many petitioners who travel to Beijing to complain are picked up by officials from their hometowns, who run representative offices in the capital for this purpose, and are then escorted back home where they can face beatings, surveillance, and further detention.