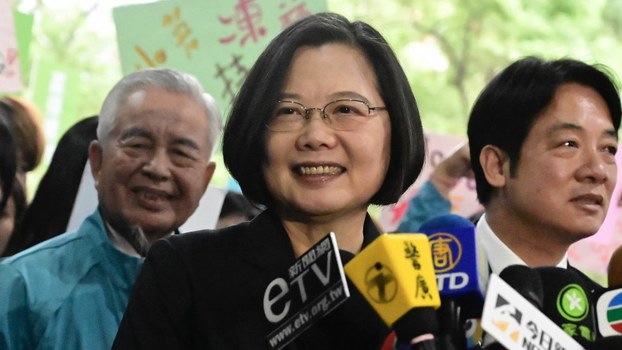 Taiwan's President Tsai Ing-wen (C) speaks after registering as a presidential candidate outside the Central Elections Committee in Taipei, Nov. 19, 2019. Taiwan will elect a new president and parliament on January 11.

China appears to be inspiring other Asian governments to curb civil rights and censor freedom of expression, according to a regional report on civil and political rights published on Wednesday."The People Power Under Attack 2019 report shows that the assault on civil society and fundamental freedoms has persisted in Asia," regional rights groups Civicus and Forum-Asia said, launching this year's Civicus Monitor report."In this region, out of 25 countries, four are rated as closed, eight repressed and ten obstructed. Civic space in South Korea and Japan is rated as narrowed, while Taiwan is the only country rated open," it said."Our research shows that there continues to be a regression of civic space for activism across the region," Civicus researcher Josef Benedict said at the launch of the report on Wednesday."The percentage of people living in Asian countries with closed, repressed or obstructed civic space is now at 95 percent," he said.The report said that censorship is the most common civic space violation in Asia, occurring in 20 countries."China continues to be the main offender as it expands its censorship regime, blocking critical outlets and social media sites," it said.Government censors had blocked domestic coverage of the pro-democracy protests that have gripped Hong Kong since June and "employed an army of internet trolls to disrupt social media narratives and control public discourse," it said.'Authoritarian tactics to hold on to power or control the narrative'

The second most common civic space violation in Asia is the use of restrictive laws to stifle democratic and political rights, and the report found evidence of this in 18 countries."Governments in Asia are increasingly adopting China’s authoritarian tactics to hold on to power or control the narrative," Benedict said. "Censorship is on the rise with states blocking news outlets and social media sites, shutting down the internet and attacking journalists exposing abuses of the state.""This is often coupled with the use of restrictive legislation such as defamation laws as a weapon to silence public debate or prevent activists and journalists from revealing inconvenient truths," he said.The groups said they were particularly alarmed by the harassment and attacks on protesters in Hong Kong."Civic space is rapidly shrinking in Hong Kong since mass protests against a proposed extradition bill began in June 2019," they said in a joint statement. "There have been reports of excessive and lethal force by the security forces, as well as evidence of torture in detention."The Civicus Monitor found that democratic Taiwan was the only fully open society in Asia.Ford Liao, president of the Taiwan Foundation for Democracy, said Taiwan's vibrant democracy and pluralistic society gave the lie to arguments -- often used by Chinese officials -- that Chinese and other East Asian societies are "Confucian" in nature and therefore unsuited to democracy."Our culture is eastern, but at the same time we still enjoy democracy and human rights," Liao said. "I always feel that this idea about Asian countries is just an excuse made by those in power, who simply don't want to pursue democracy and human rights."Hong Kong as a warning

Eeling Chiu, head of the Taiwan Association for Human Rights, said there are still authoritarian tendencies in Taiwan, particularly in the police force, but with more checks and balances on their use of state power."We also have police officers arresting young protesters or preventing protests from happening, but not as violently as in other countries," Chiu said."We have a bit more space and a higher degree of freedom than other Asian countries, whether that is to protest, or freedom of speech and internet access."Taiwan recently invited Hong Kong residents whose studies have been disrupted by university closures or fear of arrest since pro-democracy protests began in early June to continue their studies at its colleges and universities.Taiwan universities are relaxing admission procedures for Hongkongers whose universities have shut their doors early after riot police besieged a number of major campuses, sparking pitched battles with protesters.Taiwan began a transition to democracy following the death of Chiang Ching-kuo in January 1988, starting with direct elections to the legislature in the early 1990s and culminating in the first direct election of a president, Lee Teng-hui, in 1996.It has never been controlled by the Chinese Communist Party, nor formed part of the People's Republic of China.Beijing wants to rule Taiwan under the "one country, two systems" concept used to take back the former colonial cities of Hong Kong and Macau, and has refused to rule out annexing the island by force, but President Tsai Ing-wen has repeatedly said that Taiwan's 23 million people have no wish to give up their sovereignty.Tsai has been an outspoken critic of the Hong Kong government since the anti-extradition, pro-democracy protest movement gripped the city in early June, and has repeatedly warned that Taiwan could suffer a similar loss of freedom and democracy if it entertains China's plan.Taiwan's government has warned that China is stepping up a political influence campaign ahead of presidential elections in 2020, and has vowed to step up investigations of allegations of Chinese funding for candidates, organizations and media outlets."Taiwan’s freedom and democracy must not be violated," minister for mainland affairs Chen Ming-tong said on Wednesday."The government will continue to strengthen its security procedures ... to ensure that the presidential and legislative elections next year can be conducted fairly," he said, calling on Beijing to desist from interference in the elections.Reported by Hsia Hsiao-hwa for RFA's Mandarin Service, and by Chung Kuang-cheng for the Cantonese Service. Translated and edited by Luisetta Mudie.

It isn't good to emulate the vices of either of them. What game are you playing, implying that it's a binary choice between emulating China's dystopia and emulating the out-of-control capitalism of the US? Many countries have done neither.

not an authoritarian worshipper

Donald Trump's lauding of authoritarian strongmen like Putin, Erdogan, Duterte, and Kim Jung-un has exacerbated the creepy resurgence of authoritarianism worldwide, reminiscent of the 1930s. However, many other leaders have upheld the values of constitutional republicanism and rule of law, such as Taiwan, France, and Germany.

"Governments in Asia are increasingly adopting China’s authoritarian tactics to hold on to power or control the narrative," .......It is good to see others wanting to emulate China instead of the US.