Analysis: Is China Preparing to Declare an Air Zone Over the South China Sea? 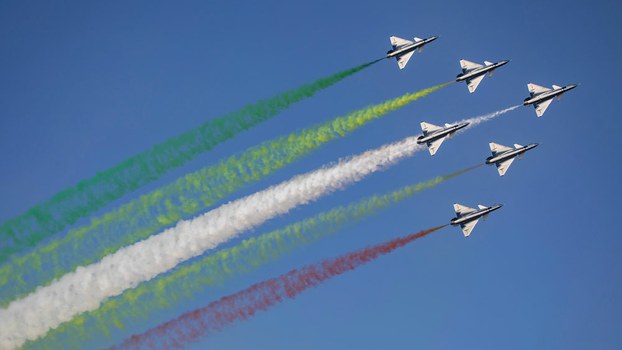 China’s People’s Liberation Army Air Force (PLAAF) performs in October 2019 as part of the 70th anniversary of the PLAAF’s founding.

AFP
Will China Declare an ADIZ Over the South China Sea? US Rebukes China at the UN

Reports of Chinese plans to declare an Air Defense Identification Zone over the disputed South China Sea have resurfaced in news media amid rising tensions in the region. But experts remain skeptical that China would take such a provocative, hard-to-enforce measure.

The South China Morning Post reported this week that China has planned for an ADIZ over the South China Sea since 2010. It quoted an unnamed Chinese military source as saying the ADIZ would be announced at “the right time” and cover the entirety of the Spratly, Paracel, and Pratas Islands. China itself has not announced an ADIZ declaration is imminent.

China has, however, made a number of recent, unilateral moves to assert jurisdiction across the South China Sea. Through April and May, it sent a survey ship into Malaysian waters to pressure a Malaysian enterprise out of exploring for resources. In April, China announced two new administrative districts to govern the Paracel and Spratly Islands. It also named 80 new tiny features in waters claimed by Vietnam.

Declaring an ADIZ would be a major step, though. An ADIZ is an area where civilian aircraft are tracked and identified before further entering into a country’s airspace, although it does not restrict travel in and out of its limits, nor does it usually apply to military aircraft.

In practice, it would likely mean civilian planes would need to report their presence to Chinese air traffic control, and could potentially be intercepted if they didn’t – although China has yet to take such an action on the ADIZ it established seven years ago over the East China Sea, further north.


The proposed South China Sea ADIZ would cover a vast area. Experts say enforcing it would present huge logistical challenges for China’s air force and could provoke diplomatic backlash. Of late, the U.S. has upped the tempo of its military aircraft flights over Chinese-claimed features in the South China Sea. Other nations maintain airstrips on islands they occupy in the area.

“I don’t see how at this particular juncture it’s in China’s interest to declare something they cannot enforce,” said Bonnie Glaser, director of the China Power Project at the Center for Strategic and International Studies think tank in Washington.

How far would China go?

There is no international law or treaty specifically stating what can and can’t be a valid ADIZ. Technically the only limit is whether a country is willing to enforce compliance with it. This can, but does not always, include sending fighter jets to intercept or escort civilian aircraft that fail to identify themselves within the ADIZ. The question of how far China would go to enforce its ADIZs was a key concern for its neighbors in the past.

China declared an ADIZ over the East China Sea in 2013 in response to Japan’s government buying some of the disputed Senkaku islands – known as the Diaoyu Dao by China – from a private Japanese owner. This prompted protests by South Korea, the United States, Japan, and Taiwan.

“The language China used for its Air Defense Identification Zone in 2013 was different from what other countries used,” said Glaser, “because it warned of some consequences if aircraft did not identify themselves. So there was this little ‘threat’ language there that people objected to at the time.”

According to Brendan Mulvaney, Director of the Alabama-based China Aerospace Studies Institute, China would be likely to enforce a South China Sea ADIZ similarly to how they enforced the East China Sea one -- by applying economic coercion and diplomatic pressure to air freight companies, passenger fleets, and the countries they come from. Today, most every country and company in the region complies with that ADIZ, although the U.S. and Japan still do not recognize it.

Neither Glaser nor Mulvaney thought it would be easy for China to effectively enforce an ADIZ over the South China Sea if one was announced soon.

“China has no hope of enforcing an ADIZ around airspace that is currently dominated by other powers. It’s just not going to be able to force an ADIZ in the Spratlys,” Glaser said. Multiple countries including Taiwan, Vietnam, and the Philippines have built airstrips on features in the Spratlys, and would regularly contest any such zone.

Mulvaney said enforcing an ADIZ through intercepts would be “feasible,” but would stretch China’s air force to its limit, as no aircraft is permanently based in the Spratlys – although military aircraft have been spotted periodically on its main base on Fiery Cross Reef, within that island chain.

“It will be a trade-off for how much they want to take away from training, exercises, and operations, in the name of escorting/intercepting aircraft that really are no threat to the PRC mainland,” he said.

'Chipping away' the global order

The concept of an ADIZ has been invoked by many other countries and is not unique to China. The United States maintains four of them around its overseas territories and North America, and Japan has one that is mostly aligned with its exclusive economic zone under the United Nations Convention on the Law of the Sea. The Philippines maintains an ADIZ over its part of the South China Sea, covering Scarborough Shoal.

Glaser said it is more plausible that China could announce such a measure over just a portion of the South China Sea.

“From my conversations with people, I think that either China waits, or as an interim measure in the near term could declare an ADIZ solely over the Paracels,” she said. China already occupies every feature in the Paracels -- which lies closer to the Chinese mainland than the Spratlys – as well as rotated planes through its base at Woody Island before, and controls the airspace above them.

Mulvaney and Glaser said a new ADIZ could bring some modest strategic benefits for China by controlling yet another dimension of the South China Sea, and most civilian airliners or companies would likely comply.

Mulvaney said overlapping or disputed ADIZs, including the existing one in the East China Sea, are not really that difficult to comply with. Very little state-to-state interaction is necessary, and most civilian air carriers are willing to make the “few extra radio calls” necessary to continue flying through a country’s ADIZ without trouble.

But such a declaration over the South China Sea – which is already the focus of a six-way, seemingly intractable territorial dispute for waters, islands and reefs on the ocean itself – would reinforce the perception that China is writing its own rules.

Beijing has in recent years skirted international law with its sweeping claims and artificial island-building and used strong-arm tactics to bully the vessels of other claimants.

Mulvaney said it would be another example of China “chipping away” at the current world order and international norms. “Similar to the salami slicing technique of feature building, unless other nations protest and oppose this ADIZ, China hopes it will become just a fact of life over time,” he said.

China has been engaging in it's long history of "death by a thousand cuts" almost the same conclusion in this report. Slicing away at living human beings slicing away parts of a country. It is standard torture practice by the Chinese