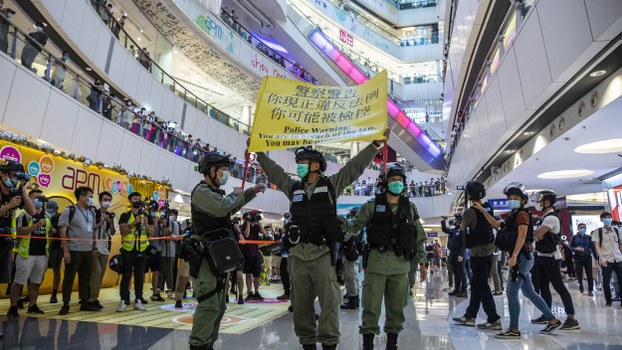 Police in Hong Kong hold up a flag warning protesters in a shopping mall to disperse, July 6, 2020.

Hong Kong's government on Monday announced further powers under draconian security laws that will allow police to search people's home without a warrant and to issue takedown requests to electronic media platforms displaying material banned under the law.

The announcement came as the city's national security committee chaired by chief executive Carrie Lam met for the first time since the law, which targets speech as well as actions, was imposed on Hong Kong on June 30 by the ruling Chinese Communist Party.

Under the new "implementation rules," which take effect on July 7, any electronic messages covered by the law -- which include protest slogans, calls for independence, and any speech critical of the authorities -- can be issued with takedown orders, on pain of jail terms and fines.

If they are unable to comply immediately, court orders can be obtained for the seizure of electronic equipment, the rules say.

The move is a direct blow to online freedom in Hong Kong, which has until now enjoyed unfettered access to the internet and protections for online privacy, unlike the population of mainland China.

Platform and internet service providers are covered by the rule, and Facebook and WhatsApp said on Monday they had “paused” the processing of government requests for user data in Hong Kong.

The encrypted messenger Telegram, once widely used by the pro-democracy movement, also said it had ended cooperation with police and government in Hong Kong.

WhatsApp said its decision was taken pending further assessment of the impact of the national security law, and that the company would be carrying out "formal human rights due diligence and consultations with human rights experts."

Facebook said in a statement: "We believe freedom of expression is a fundamental human right and support the right of people to express themselves without fear for their safety or other repercussions."

"We have a global process for government requests, and in reviewing each individual request, we consider Facebook’s policies, local laws and international human rights standards," a spokesperson said.

Telegram said it would await an "international consensus" on the changes under the new security law.

The National Security Law for Hong Kong bans a vaguely defined and all-encompassing slew of actions including many seen during last year's pro-democracy protests and anti-extradition movement.

The law targets anyone in the world committing actions within its scope, regardless of whether they live in Hong Kong or are its permanent residents.

Anyone suspected of "crimes" under the law can be issued with a travel ban, with their passport confiscated and their assets frozen.

Authorities on the democratic island of Taiwan and in Canada have warned their nationals not to travel to Hong Kong, Macau, or mainland China unless absolutely necessary, as online comments critical of Beijing -- even in their home countries -- could place them at risk of arrest under the law.

Businesses, groups, and other legal entities suspected of breaching the law may be shut down or have their licenses to operate revoked, echoing a process used by authorities in mainland China to revoke human rights lawyers' license to operate as a business.

Anyone "causing residents of the Hong Kong Special Administrative Region to have misgivings about the Central People's Government through various unlawful means," will also be pursued under the law, a provision that also could potentially be used to target the media and anyone commenting on social media.

Hong Kong's courts are already swamped with public order cases linked to a mass protest and civil disobedience movement that initially opposed extradition to mainland China, and which later broadened to include fully democratic elections and greater police accountability, as well as challenging China's approved description of the largely peaceful protests as "riots."

Pro-democracy activist Agnes Chow pleaded guilty on Monday to charges related to a major protest outside police headquarters on June 21, 2019.

Chow pleaded guilty to "inciting others to participate in an unlawful assembly," and to "participating in an unauthorized assembly," at Eastern Magistrate's Court, government broadcaster RTHK reported.