Beijing's "protest parks" are empty and unused, and activists say demonstrations are overtly discouraged. Police say it's because there is a good 'social environment'; a lone protester in Ritan park has another story to tell.
2008-08-18
Tweet 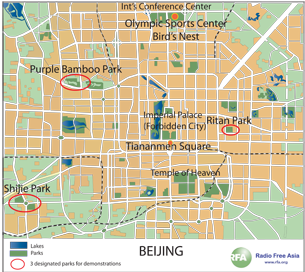 HONG KONG—Authorities in Beijing have turned down dozens of groups and individuals with grievances who wish to use the officially sanctioned Olympics “protest parks” in the capital, activists and police said.

Beijing Olympics committee spokesman Wang Wei said he believed that potential protesters wanted to win redress. "But in order to solve their problems, they should go through legal procedures, not stage protests," he told a recent news briefing in Beijing.

Meanwhile, outside one of the officially designated areas for protesters, Beijing's Ritan park, an armed police officer said: "There is no protest...because our social environment is good."

A lone protester in the park, Gao Wenjuan, had a different story to tell, however.

"I just want justice," she said. "My husband is entitled to receive medical treatment. His name should also be cleared. My husband was a Communist Party member. He was also a police officer. Without providing any evidence, he was detained for nine months and labeled as a criminal. His right hand now is disabled."

"They even took away his money. [The Fuxin municipal procuratorate] also threatened me with arrest if I continue to petition for him. They treated me as a troublemaker when I tried to reason with them. I have petitioned in Shenyang and Beijing many times, but to no avail. They just dragged my case. Every time they told me they would look into my case, but afterwards there was no follow-up at all," said Gao, who said she had 'escaped' police surveillance on the family home to travel to Beijing.

Escorted from the scene

After speaking to RFA, Gao was escorted from the scene by an unknown man in a black polo shirt, who waved a hand in the video camera lens and declined to confirm if he was a plainclothes policeman.

Would-be protesters who tried to apply to protest in Beijing's parks said the application process was well-nigh impossible.

“When we went to submit our application…they made inquiries about the situation and wanted me to sign those instead, and they refused to take the form from me,” a spokesman for a group of 32 people from Linyi city in the eastern province of Shandong said.

“The staff member said that our application was not accepted because they cannot grant it the first time [we apply],” said Zhang Feng, whose group is complaining about forced evictions by their local government.

“Instead, we should wait to see if we can mediate the issue and if that doesn’t work we can try to submit an application a second time,” he said.

Four group members traveled to the Beijing Municipal Public Security Bureau last week to deliver the form by hand. Zhang said he was interviewed by a clerk who took notes, a practice forbidden by China’s law on public demonstrations.

Zhang was told that if an application is submitted for a permit to protest on Aug. 20, the Public Security Bureau should reply by sometime around the Aug. 18, but he acknowledged he had little hope.

Protest parks have appeared in past Games, including Salt Lake City and Athens.

China threw open its parks on July 23, but several people said their applications to demonstrate in Purple Bamboo Park in the west of the capital and Ritan park in the northeast of the city near the diplomatic quarter had been turned down.

An employee who answered the phone at the Purple Bamboo Park confirmed that no demonstrations had been held since the announcement in July, but he said they didn’t know why.

The official in charge of protest parks at the Beijing municipal public security bureau declined requests for a interview.

From this perspective, the system is really just a means to supervise demonstrations."

Among those detained for attempting to demonstrate during the Olympics were Hunan petitioner Tang Xuecheng and Fujian civil rights activist Ji Sizun, according to petitioners and foreign media reports.

Paid not to protest

Beijing-based human rights lawyer Li Xiongbing said he had also found that applications for protests were extremely hard to have approved; this was true both during the Olympics, and before.

“From this perspective, the system is really just a means to supervise demonstrations,” Li said.

Shanghai-based civil rights lawyer Zheng Enchong said several petitioners were still in detention in the city after more than 10 of them traveled to Beijing to demonstrate individually after their application was turned down by police.

The petitioners were detained after being brought back from Beijing, Zheng said.

I followed the standard procedure. They refused to take our application. Then they told us to withdraw our submission."

Shanghai petitioner Shen Peilan has been under 24-hour surveillance by authorities since Aug. 1.

On the morning of Aug. 6, Shen planned to go to the official complaints office in Shanghai but was intercepted by authorities and beaten, Zheng said. Local police wouldn’t accept her complaint and she has decided to stage a hunger strike in protest.

Shan Chun, a representative of a group of retired Beijing police officers, has applied twice for a permit to protest in the Olympics' designated protest zones.

“On Aug. 7 I went to apply but was immediately refused. On Aug. 8, which was the day of the opening ceremonies, I thought perhaps there would be a change,” Shan said. “I went again to apply, but I was simply told that I couldn’t hold a demonstration about this issue.”

Shan said officials told her that the issue would have to be referred to higher authorities, but soon afterwards they simply told her that she could not stage a protest.

“They said that I shouldn’t speak about this complaint, and that it was not a matter of it being accepted or not, but that it would be treated as a non-issue,” she said.

“At long last our country now has this policy whereby we can protest…we have to take advantage of this one opportunity to voice our own opinions,” she said.

“We can do this and stay in accordance with regulations. But instead they are refusing to entertain the idea, and so it is like a vase on a table, pretty to look at but useless,” she said of the protest parks. “Chinese people are not afforded this human right. If these promises were true, they would truly be accepting applications for complaints.”

The Beijing Public Security Bureau has said 74 of 77 protest applications submitted have been withdrawn because their issues had been resolved.

Shan disputed that assertion, saying, “It’s a lie. I know it’s a lie because I myself submitted the applications. A lot of people can bear witness to that fact. I followed the standard procedure. They refused to take our application. Then they told us to withdraw our submission.”