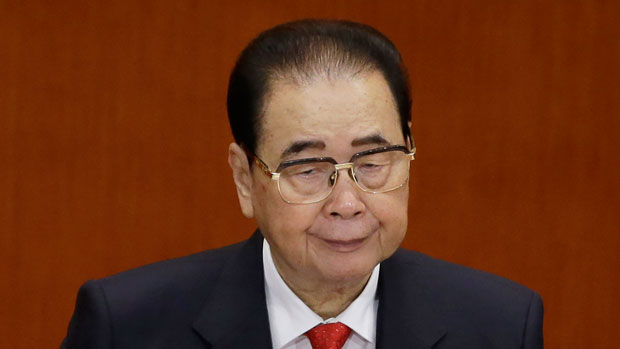 Former Chinese premier Li Peng, who gained international notoriety in 1989 as the "Butcher of Beijing," has died at the age of 90, state media reported on Tuesday.

"Li Peng, former chairman of the National People's Congress Standing Committee, died of illness in Beijing at the age of 91 at 11:11 p.m. Monday," Xinhua news agency reported, apparently using the Chinese convention for calculating a person as one year older at each new year, rather than at their actual birthday. Li was born on Oct. 20, 1928.

His death came just weeks after the 30th anniversary of the Tiananmen massacre by the People's Liberation Army that ended weeks of peaceful student-led protests in the spring and early summer of 1989 and left an unknown number of unarmed civilians killed, maimed, or injured.

Li played a key role in the crackdown, something which the ruling Chinese Communist Party newspaper the People's Daily was quick to mention in his official obituary.

"In the political turmoil during the spring and summer of 1989, with the firm backing of the older generation of proletarian revolutionaries represented by Comrade Deng Xiaoping, Comrade Li Peng ... took decisive measures to stop the unrest and quell the counterrevolutionary riots," the paper said.

Li should be credited with "stabilizing the domestic situation" and playing a decisive role in deciding the fate of the regime, the article said.

However, a former student leader said Li should be blamed for provoking the renewal of a nationwide protest movement that had already quietened down in the wake of mass mourning activities on Tiananmen Square for late liberal premier Hu Yaobang on April 22, 1989.

"I will never forgive Li Peng for as long as I live. He was the Butcher of the Tiananmen massacre," former 1989 leader Wang Dan said in a YouTube broadcast shortly after Li's death was announced.

"Why does he bear some of the greatest responsibility for the massacre?" Wang said. "Mostly because of the April 26 editorial. There's still a lot of mystery surrounding how that was published."

"Who was behind the April 26 editorial, and what was their political aim?" Wang said, citing late ousted premier Zhao Ziyang's memoirs. "The only person who had ... the power to [make this happen] was Li Peng."

According to Zhao and Wang, the editorial was largely based on private comments made to Li by then retired supreme leader Deng Xiaoping, that were never intended by Deng for wider dissemination.

"Deng Xiaoping was unhappy that [Li Peng] had made his comments public, and in such an authoritative forum as a People's Daily editorial," Wang said on his YouTube channel.

"The student movement that followed the [April 26 editorial] was instigated by Li Peng."

'A plot to confuse the people'

The Tiananmen Papers, an account of the events of the spring and early summer of 1989 based on internal party documents compiled by Zhang Liang and edited by Andrew Nathan and Perry Link, also casts Li as the instigator of the inflammatory article, which framed the mass protests and mourning activities as a plot to overthrow the regime.

"This is a well-planned plot ... to confuse the people and throw the country into turmoil," the editorial said. "Its real aim is to reject the Chinese Communist Party and the socialist system at the most fundamental level."

The editorial sparked large-scale student protests against the article's hard-line tone in major cities across China.

Li is quoted as telling the Politburo the following day: "This turmoil is the result of long-term preparation by a tiny minority of bourgeois liberal elements hooked up with anti-China forces outside the country."

When taken to task by then General Secretary Zhao Ziyang for creating a "sore point that has the students all stirred up," Li said the core message had come from Deng Xiaoping himself, who had officially retired from politics, but who was still in charge behind the scenes.

Li was also involved with a later editorial characterizing the students as the innocent pawns of conspirators, and made similar comments in a paternalistic vein when he met with students to try to get them to end the hunger strikes, according to The Tiananmen Papers.

Wang said he was sitting opposite Li at the meeting in the Great Hall of the People, and that the premier had made a series of disjointed comments about who would speak when that made no sense.

"We none of us had a good opinion of Li Peng on that day," Wang recalled.

By May 18, Li was meeting with Deng and other party elders without Zhao, in a fateful meeting that agreed to the imposition of martial law in Beijing, paving the way for the massacre of civilians by the People's Liberation Army on the night of June 3 and in the days that followed.

Later, Li told the Politburo standing committee that a "tiny, tiny minority of individuals" was trying to overthrow single party rule in China.

"They are trying to pave the way for setting up opposition groups and parties in China," he said. "We're headed for nationwide turmoil if we don't put a stop to this soon."

Zhao's former political aide Bao Tong, who has been under house arrest and close surveillance for most of his life since serving a seven-year jail term after Zhao's fall, said he still doesn't know to this day how the party's leaders changed their minds in such a short space of time, given that Zhao had already agreed to take a more conciliatory line in a private meeting with Deng on May 13.

Nobody knows why Deng, having agreed to this on May 13, decided to go ahead with martial law at a Politburo standing committee meeting at his residence on May 17, Bao told RFA on Tuesday.

"In the course of just a few hours, the whole plan had changed, and the students were causing turmoil," Bao said. "People were saying that they were reminded of the Cultural Revolution when they saw the students [protesting]."

Chinese political journalist Gao Yu said Li would be remembered above all for his role in the 1989 crackdown.

"One [of his crimes] was the massacre of June 4, 1989 in which he played the supporting role, with the leading role played by Deng Xiaoping," she said.

"And yet it's a funny resume to have, because he really lets Deng Xiaoping off the hook, because Li Peng takes all of the blame," she said.

Former 1989 student leader Wuer Kaixi had a more succinct reaction to the former premier's death, tweeting: "Li Peng died. He was an asshole. Now he is a dead asshole."

Tiananmen Mothers spokeswoman You Weijie said victims' families have carried the burden of their loss for three decades with nothing but police surveillance and harassment to show for it, in spite of annual demands for someone to be held accountable for the bloodshed and compensation of victims.

"Li Peng lived happily to a ripe old age; so did Deng Xiaoping," You said. "But [the victims' families] have been living in pain, and haven't been able to enjoy their lives."

"They labeled their own citizens with the slur of counterrevolutionary rebellion, but they were all right," she said.

Hong Kong rights activist and barrister Albert Ho, who has campaigned for a reappraisal of the June 4, 1989 massacre for three decades, said Li bears a huge amount of responsibility for the massacre.

"It wasn't just that he was the one to announce martial law," Ho said. "He also gave a lot of wrong information to [then mayor] Chen Xitong and others, and he formed a cabal to ensure that [then premier] Zhao Ziyang lost Deng's trust."

"[He also] encouraged Deng Xiaoping to make the decision to impose martial law and to commit the massacre," he said, adding that Li will also be remembered for pushing ahead with the hugely controversial Three Gorges hydroelectric dam that led to the forced displacement of millions of people in the Yangtse River basin.

Reported by Qiao Long for RFA's Mandarin Service, and by Wong Siu-fung, Sing Man, and Pan Jiaqing for the Cantonese Service. Translated and edited by Luisetta Mudie.