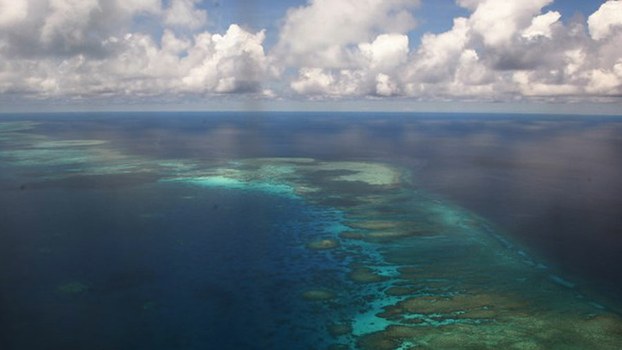 An aerial photo shows part of Mischief Reef in the disputed Spratly Islands in the South China Sea, April 20, 2017.

The Philippines has made significant progress in upgrading facilities in an island it controls in the South China Sea, but it will “take another year at least” to finish all the construction work, Defense Secretary Delfin Lorenzana said Friday.

His announcement came more than a week after a Philippine Navy heavy landing craft, BRP Ivanatan, completed a re-provisioning mission to Pag-asa Island (Thitu Island). The island where Philippine civilians and military personnel live is a municipality within the Kalayaan chain of islands, which are also part of the disputed Spratly Islands.

“It is not quite finished,” Lorenzana told BenarNews. “Only the beaching ramp is 95 percent finished. We will have to lengthen and pave the runway.”

He said it would “take another year at least” to complete all the construction work on the island. He declined to elaborate further.

The 1.6 billion peso (U.S. $31.4 million) dollar project, which began in 2017, includes the refurbishment of runway facilities, docking areas, power and desalination plants, and a radio station. But deadly storms and continued tensions in the South China Sea have slowed down the rehabilitation project, officials said.

Manila has had a presence on Pag-asa since the 1970s. The Spratly chain that surrounds it is believed to sit atop vast natural oil and gas deposits. The Spratlys are claimed in whole or in part by China, the Philippines, Brunei, Malaysia, Vietnam and Taiwan.

The government of President Rodrigo Duterte has been careful to not antagonize China, since he took office in 2016. He has visited Beijing multiple times and said repeatedly that he did not want to risk angering China over territorial wranglings in the sea region.

Last month, however, the Philippines strongly objected to Beijing’s creation of two districts in the South China Sea, as well as its designation of Kagitingan Reef as an administrative center for its “Nansha district.” The reef lies within the Kalayaan group.

Manila had also recently sided with Hanoi when a Chinese ship allegedly sank a fishing vessel in contested waters – nearly similar to what had happened in June 2019 to a Philippine vessel, which was rammed by a Chinese boat, leaving 22 Filipino fishermen at sea.

Lorenzana said the Navy’s docking of the ship on Pag-asa could be considered historic, and came at a time when troops in the island needed fresh supplies and goods.

He said the ship docked in the Navy’s headquarters in the southwestern city of Puerto Princesa last week, weeks after completing its missions in the Kalayaan island group.