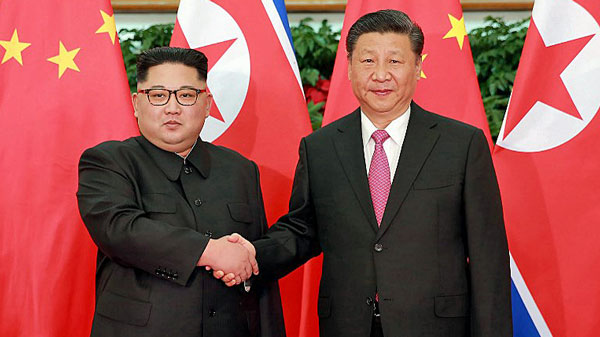 Chinese President Xi Jinping on Wednesday hailed what he described as "progress" on the Korean peninsula, as North Korean leader Kim Jong Un returned to China, and as negotiations continued between Pyongyang and Washington over a planned summit between Kim and U.S. President Donald Trump.

"Comrade Chairman [Kim] made a special trip to China to meet me again just after 40-odd days, at a crucial time when the Korean peninsula situation is undergoing profound and complex changes," China's state news agency Xinhua quoted Xi as saying.

"After the first meeting between me and Comrade Chairman, both [bilateral] relations and the Korean peninsula situation have made positive progress," Xi said. "I feel happy about it."

Xi said further meetings were also an option, in order to "realize long-lasting peace and stability on the Korean peninsula, and promote regional peace, stability and prosperity."

"The two sides should maintain frequent exchanges, strengthen strategic communication, deepen understanding and mutual trust, and safeguard common interests," Xi was quoted as saying, adding that he and Kim have remained "in close contact" since he gave the North Korean leader the red carpet treatment during his March visit to Beijing.

"China supports [North Korea's] adherence to the denuclearization of the peninsula, and backs the dialogue and consultation between [North Korea] and the United States for resolving the peninsula issue," he said.

North Korean state radio quoted Kim as saying that "he will firmly hold hands with the friendly Chinese comrades in the historic long march to achieve the peace and prosperity of the Korean peninsula and Northeast Asia."

Political analysts said North Korea will feel more confident honing its strategy ahead of the Trump summit if it has input from its larger neighbor and sole ally first.

"[Kim] fears that Trump may take a hostile position during negotiations, leaving him looking weak," Germany-based political commentator Peng Tao told RFA. "He is wary of Trump, so he needs Xi on his side."

There are benefits for China, too, according to Hong Kong political commentator Willy Lam, who said Xi wants to ensure that any peace agreement has Chinese input.

"This is about Xi Jinping's fear of getting marginalized," Lam told RFA. "During the recent meeting between Kim and the South Korean president, Moon Jae-in, it began to look as if the two Koreas and the U.S. could resolve the situation, and that meant a diminished role for China, which is anathema to Xi Jinping."

The meeting between Xi and Kim comes after Xi dispatched his foreign minister Wang Yi to Pyongyang last week to lay the diplomatic groundwork for the second visit, Lam said.

"Xi Jinping is adamant that, regardless of the outcome of the Kim-Trump summit, Beijing must be involved in any final settlement," he said. "One model Beijing is looking at is four-party talks between the two Koreas, the U.S. and China, once the Kim-Trump summit is done."

"They would want any outcome to be decided by these four countries," he said.

"U.N. economic sanctions are still in place, which is putting Kim Jong Un under a huge amount of pressure to the extent that he is fighting to cling onto political power now," Lu said.

"What concerns Xi Jinping even more is that North Korea can't take much more of such pressure, and China can't breach U.N. sanctions at this time," he said. "Xi Jinping wants to be sure that Kim Jong Un won't cave in to pressure from Trump; he genuinely fears a rapprochement between Kim and the U.S."

Beijing-based political commentator Zha Jianguo said the U.S. strategy appears to be working, and that Xi now appears to believe that total denuclearization is a possibility on the Korean peninsula.

"Both China and Kim Jong Un appear to share the view that there is a greater possibility of [Kim's] abandoning the nuclear program," he said.

But he said the crux of the matter will lie in how Kim Jong Un responds to tough demands made by Trump at the summit.

"Trump is sure to demand that [North Korea] publicize verifiable evidence of its irreversible abandonment of its nuclear program," he said.

Abe called on North Korea to reach a "complete, verifiable and irreversible" denuclearization and abolition of weapons of mass destruction.

He also called for a resolution for Japanese nationals kidnapped by North Korea.

Reported by Ho Shan and Fok Leung-kiu for RFA's Cantonese Service, and by Wang Yun and Qiao Long for the Mandarin Service. Translated and edited by Luisetta Mudie.