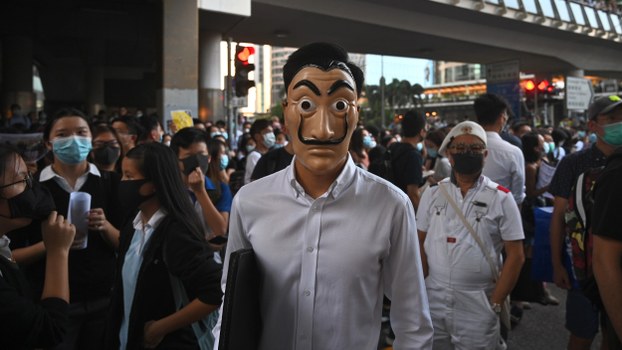 A man wearing a mask takes part in a protest in the Central business district in Hong Kong, Oct. 4, 2019.

Thousands of people took to the streets of Hong Kong on Friday in protest at the Hong Kong government's ban on the wearing of masks in public, which takes effect at midnight under emergency powers granted by colonial-era legislation.

Chanting "Stand with Hong Kong!", many of the crowd were in regular work clothes, but wore masks to show their displeasure with chief executive Carrie Lam's invocation of emergency laws to bring in a ban on face masks.

The protest filled the narrow streets around the Central business district before spilling out onto the main urban highway of Connaught Road Central, where some protesters burned a street banner congratulating the ruling Chinese Communist Party on the 70th anniversary of the People's Republic of China on Oct. 1.

"You can ask anyone if they agree with them bringing in this law," a protester surnamed Chu told RFA on Friday. "This will most likely bring even more people out onto the streets, just to oppose this law."

"What's more, they'll be wearing masks, and we'll see how many people they can manage to arrest," she said. "Everything [this administration] has done has been incredibly idiotic."

Rather than the black T-shirts, gas masks, goggles and helmets that have characterized anti-government protests since early June, most participants were in regular office clothes after finishing work for the day, and wore flimsy surgical or fabric masks as a symbolic form of protest.

Lam told a news conference announcing the ban on Friday that the city was in a situation of "chaos and panic," and "serious public danger," one of the conditions enabling her cabinet, the Executive Council (ExCo) to pass the ban immediately.

"We believe that the new law will create a deterrent effect against masked violent protesters and rioters, and will assist the police in its law enforcement," she said.

But Chu and other protesters said the government is largely responsible for the escalation in protests.

"The only reason we wear masks is because of the government's failure to act, and to prevent them coming after us in retaliation," she said. "All of the problems we are facing today were created by them."

"I don't normally wear a mask, but I definitely will if they implement this law; I don't think I have broken any laws," she said.

The government issued a statement on Friday calling on protesters to stop blocking traffic.

"A large group of protesters have been occupying various major roads ... causing serious obstruction to traffic," the statement said. "Some of them also set fire to a national flag."

"Police warn the protesters to leave and stop their illegal acts immediately," it said.

Lam said that while the mask ban wasn't the same as declaring a state of emergency, it was "essential ... to stop violence and restore calm."

She said the new law allows for the "legitimate" wearing of masks, for example, to comply with work safety regulations.

The law will be tabled in the Legislative Council (LegCo) on Oct. 16, where members will be able to discuss it in more detail, Lam said.

Pro-democracy activist Lester Shum said he had filed an application to launch a judicial review of the new law.

Shum, who was a prominent figure in the 2014 Occupy Central pro-democracy movement, said Lam's use of emergency legislation posed a threat to people's personal safety and property at the hands of law enforcement, because Hong Kong's Emergency Regulations Ordinance provides for the seizure of private property by police.

Sunny Cheung, spokesman for the Hong Kong Higher Institutions International Affairs Delegation that seeks to build civic links between Hong Kong people and overseas allies, said the mask ban was part of the authorities' attempt to create a climate of fear in the city.

"Nobody wants the police to know their identity, because this would put them at risk, so it's part of the climate of fear, which is when people daren't come out in protest because they fear the consequences to themselves," Cheung said.

He said it was unlikely to work, however.

"I don't think protesters on the street are going to back down," he said. "They will stand up in opposition to this evil law."

Reported by Lau Siu-fung for RFA's Cantonese Service, and by Xue Xiaoshan, Qiao Long and Zheng Chongsheng for the Mandarin Service. Translated and edited by Luisetta Mudie.

Hongkonger should wear XI BINH FACE mask so polices think twice about how to use force against you.

Vietnamese should just shut the fuck up and stay out of China's internal affairs. China will give you a new border war soon.