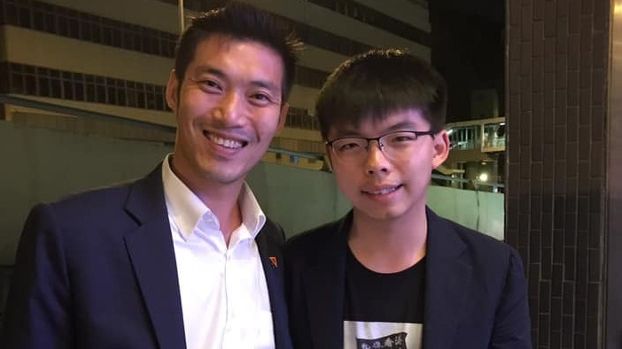 Hong Kong was in imminent danger from violence and disobedience of laws, the embassy said in a Thai-language post on Facebook.

The diplomatic mission blamed a “group who wants to separate Hong Kong from China and collaborates with outside influences by circulating rumors and distorted information for their own agenda.”

“A certain Thai politician contacted the group … by gesturing support, which is a grave mistake and an irresponsible act. China hopes that the person involved could sense trouble in Hong Kong and be careful. ... Just act to benefit the relationship between China and Thailand,” the statement said.

The embassy issued the statement after Wong, a leader of the ongoing protests in Hong Kong, posted a photo of his meeting with FFP leader Thanathorn Juangroongruangkit during the Open Future Festival, sponsored by The Economist magazine on Oct. 5. Both Thanathorn and Wong were both listed among speakers at the event in Hong Kong.

“Under the hard-line authoritarian suppression, we stand in solidarity,” Wong said in a posting about the meeting.

Wong, who was denied entry into Thailand in 2016 when he was to deliver a speech marking the 40th anniversary of a bloody crackdown at Chulalongkorn University in Bangkok, praised Thanathorn.

“Although I do not know when I will have the opportunity to visit Thailand and it is not clear whether he will be denied entry to Hong Kong in the future, we hope that as conservative forces or authoritarian power expands in the Asia-Pacific Region, we can continue to promote the value of democratic progress,” he said.

Thanathorn, who was a candidate for prime minister earlier this year after Thailand’s first general election since a military coup in 2014, stopped talking to reporters a few months ago.

But an FFP spokeswoman said the issue had been resolved with the Chinese Embassy, but she did not elaborate on conversations between Wong and Thanathorn.

“The Future Forward Party has presented factual information about this issue with the Chinese Embassy. We understand each other well,” FFP spokeswoman Pannika Wanich told BenarNews, an RFA-affiliated online news service, by phone Thursday evening.

Thai government officials could not be reached for comment.

Chinese embassy officials did not confirm the conversation, but described how the Hong Kong protests sparked by an extradition bill, which has since been withdrawn, have taken a different tack.

“The opposition to [the] extradition bill has completely drifted into the development of the coup against Xi with interference from influential groups of outsiders who want to separate Hong Kong from China,” the statement said.