Chinese Dissidents Under Pressure As Hong Kong Fights For Freedom 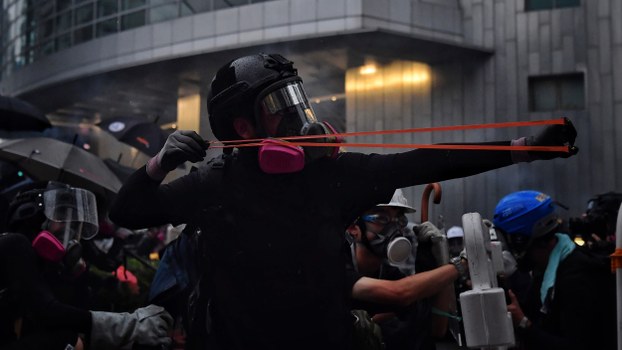 Authorities in the central Chinese province of Hubei have stepped up pressure on a prominent writer after he spoke out publicly in support of the anti-extradition movement in Hong Kong via Twitter.

Wuhan-based writer Li Xuewen said his account on Twitter, which is banned behind China's Great Firewall of internet censorship, had recently been shut down.

"My Twitter activity has stopped, starting yesterday," Li told RFA on Monday. "I can't send out any more tweets for the time being."

He said the restrictions on his social media activity were part of a nationwide crackdown on freedom of speech in China that has been stepped up ahead of the 70th anniversary of Communist Party rule in October, and in the wake of several weeks of anti-extradition protests in Hong Kong.

"There are huge restrictions on people posting to Twitter anywhere [in China] at the moment," Li said, adding that outspoken tweeter Zhang Jialong was recently detained by authorities in the southwestern region of Guizhou over his posts to the platform.

"Things have gotten a lot tighter [for me] on Twitter lately," he said. "But the main reason for this isn't linked to Hong Kong: it's because I tend to post things that oppose [the government], relating to prisoners of conscience and so on."

"To be honest, we are pretty powerless with regard to what's going on in Hong Kong: we couldn't do anything to help even if we wanted to," he said.

Li and his wife, the rights lawyer Huang Simin, were driven away from their chosen home in the southern province of Guangdong last year, and forced to return to the city of Li's birth.

Huang was called in for a "chat" with local state security police last month, he said, while the authorities had also been in contact with her elderly mother.

"Any experienced dissident who remains in China will know very well that the authorities will typically seek to put pressure on them via their relatives," Li said. "They won't necessarily go directly to the person concerned."

"All this has become normalized, but it causes all sorts of trouble if they start harassing your family," he said.

Hunan-based dissident Chen Siming said he has been called in for questioning by local police in the past few months.

"Mainland Chinese don't know much about Hong Kong, other than they have clothes to wear and plenty to eat," Chen said. "They really have no clue about Hong Kong's desire for fully democratic elections."

"The [ruling] Chinese Communist Party wants to suppress this desire of Hong Kong people, and the last thing they want is for Hong Kong people to spark a fire for freedom and democracy that ignites over here on the mainland," he said.

Chinese authorities are currently checking the devices of anyone crossing the internal border from Hong Kong to mainland China, as part of a concerted campaign to ensure that no unedited news of the Hong Kong anti-extradition protests is able to reach residents of mainland China, while Beijing tries to promote its view of the protests as an attempt by foreign powers to stage a "color revolution" in China far beyond its borders.