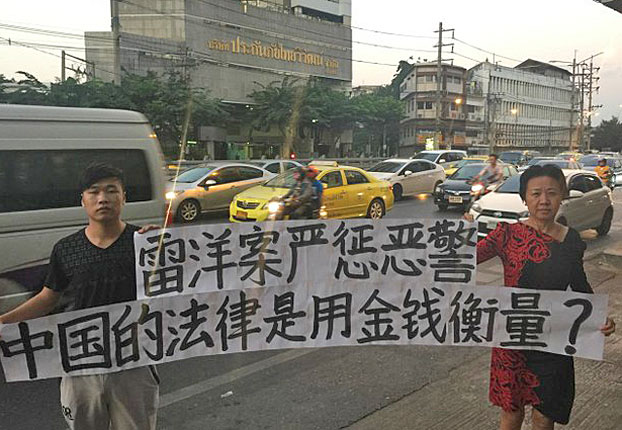 Chinese petitioners in Thailand call for justice for Lei Yang in an undated photo.
Photo courtesy of Xin Jiang

Authorities in the Chinese capital have punished five police officers in connection with the death of an environmentalist in police custody, as his family withdrew their attempts to win legal redress in a civil lawsuit after an unprecedented payout from the government, sources close to the family told RFA on Friday.

Lei Yang died soon after being detained on May 7 by police during a raid on a foot massage parlor in Changping county, just north of Beijing, sparking public anger and raising questions about his death.

Now, the Beijing municipal police department has fired Xing Yongrui, deputy head of the Dongxiaokou police station in Changping. Xing has also been expelled from the ruling Chinese Communist Party.

Zhou Shuaimin, the head of the Dongxiaokou police station, was given a "serious disciplinary warning" by the Communist Party and relieved of his duties.

Another of the five officers, Kong Lei, received an "administrative dismissal" and has been moved from his post, while the contracts of an auxiliary police officer and two security guards have been terminated, sources said.

The head of the local security brigade Zhou Minghui and his deputy Wang Yuguo were also handed administrative punishments of various degrees.

Lei's family, who had questioned police claims that Lei was resisting arrest, saying he was heading to the airport to meet a friend, now say they are no longer pursuing a lawsuit against the police over his death.

Lei's wife and brother Lei Peng declined to comment when contacted by RFA on Friday.

"It's not convenient for us to give interviews right now," Lei Peng said, using a euphemism that is often used to refer to close surveillance or police presence.

But a source close to the family said they had been awarded an unprecedented sum in compensation.

"The authorities have said they mustn't post on social media about it, nor can they make the figure public, and they have to withdrew all legal proceedings and fire lawyer Chen Youxi," the source said.

"This is really an unprecedented sum, which goes to show that international public opinion, and public opinion generally ... makes a difference."

Another source told RFA: "His family are farmers, and they were told that if they continued to kick up a fuss and make trouble, they would only get compensation according to government rates through legal channels, which would amount to less than a million," the source said.

The lawyer hired by the family, Chen Youxi, announced on Thursday that he had been dismissed by Lei's family on Wednesday, and that they were dropping all legal proceedings related to their son's death.

Meanwhile, Lei's former classmates at the prestigious Renmin University, where Yang graduated with a master’s degree in environmental science in 2009, said they "respected and understood" the decision by his family.

But they said in a joint statement that they disagreed with the decision of the authorities not to pursue criminal charges against the officers.

Fengtai District People's Procuratorate said on Friday it wouldn't pursue charges against the officers, saying that their behavior constituted a "dereliction of duty, but that the circumstances were minor," official media reported.

Sources said the decision to detain the officers at all had prompted a massive backlash from public security officials at the highest level, and the case was dropped after high-ranking intervention.

"[Public security minister] Meng Jianzhu got very angry about this after the Renmin University alumni started to kick up a fuss," one source told RFA.

Beijing-based veteran democracy activist and political commentator Zha Jianguo said the authorities wanted to settle the case out of court, as it was perceived as a potential flashpoint for social unrest.

"They are afraid that [punishing the officers] would have a negative effect on the police force, who are at the front line of the stability maintenance operation," Zha said.

"In the case of Lei Yang, the authorities are using a carrot and stick approach," he said. "The carrot is that they detained the officers at all, and found they did have a case to answer, and handed a massive sum in compensation to the family."

"The stick is that they want this case laid to rest right now and never brought up again."

The Fengtai district prosecutors concluded that Lei had "procured sexual services and fiercely resisted law enforcement," and had died from choking on his own vomit in custody later.

They found that Lei's death was related both to police actions and to his resistance, and that police had acted with negligence in not getting him medical treatment soon enough.

Former fellow students of Lei's at Beijing's prestigious Renmin University penned an open letter taking issue with the decision and calling for justice for Lei.

The letter, a version of which was also sent to President Xi Jinping, had garnered more than 2,500 signatures when it was last seen by RFA.

Reported by Wong Siu-san and Sing Man for RFA's Cantonese Service, and by Qiao Long for the Mandarin Service. Translated and written in English by Luisetta Mudie.