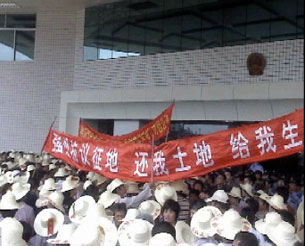 In an undated photo, residents of Guangdong province protest outside a government building in a land dispute.
Provided by villagers

HONG KONG—Villagers in one of the poorest regions of China have vowed they will fight a government proposal to use their farmland for a cement factory, as a deadline for agreement set by local officials passed on Wednesday.

Residents of poverty-stricken Gushi county in the central province of Henan said they had been sent a letter only last week by village-level officials proposing the sale of a plot of desperately needed farmland at below-market compensation levels.

Dongba village resident Wang Dengyou said the villagers are dependent on agriculture as a way to eke out a living.

"We decided that it wasn't enough compensation," he said. "Even if the price was a bit higher, if we sold it we would still have lost our food supply."

The government letter also threatened the villagers with land requisition and no compensation at all if they refused the offer, residents said.

Villagers accused local officials of skimming off a high percentage of money received from the property developers for the land.

"If you think about it, the county government has received 20,000 yuan per mu, while they are only offering 12,500 yuan per mu to the villagers," Dongba resident Yang Huaibing said.

"This is being pulled by [officials in] our village."

According to local media reports, a series of land disputes has followed county Party secretary Guo Yongchang's 2004 pledge to bring more investment to Henan, which has some of the poorest rural communities in China, as local officials make bids to acquire land in the area.

China's richer coastal provinces are also seeing a rash of land-related protests, as local officials seek to use land for lucrative development projects amid fierce opposition from rural communities.

Residents of Sisha village in Zhejiang province found out last week about a secret deal facilitating the sale of their land to developers made by their own village committee only after bulldozers moved in and began leveling nearby Yanyushan hill.

Employees working for property developers Lide Co. told angry farmers that they had already bought the hill from local government officials, sparking a night-time vigil and a face-off with riot police armed with shields and batons.

"There are 40-50 special police officers stationed at the hill every day, and they are equipped with shields and truncheons," said resident He Jinxiong.

Another villager surnamed Lin said the government had also hired local thugs as reinforcements. "There are also gang members there. They blocked the entrance to the hill and stopped our villagers from getting into it," Lin said.

"If this sale had been approved by the villagers, I don’t think there would be such a confrontation," he said.

No funds from eel farm

Residents of Nanwan village in southern Guangdong province have also staged nightly protests during recent weeks outside government offices against alleged corruption surrounding an eel farm built on their land.

"About 2,000 people went to the township government on July 7 with many older people kneeling there to implore local officials to pay attention to the matter," a Nanwan farmer surnamed Shao said.

"But no one came out to take care of us. Therefore, we farmers are demonstrating every night by encircling the village. There are 6,000-7,000 of us every night," he said.

The protesters were beating drums and clashing gongs after finishing a day's work in the fields, they said, in protest at the disappearance of promised funds from the eel farm and plans to take a further 2,500 mu (167 hectares) of their farmland for development.

"We demonstrate every night. This is because we have to work in the field during the daytime," another Nanwan resident said.

Land disputes have spread across China in recent years, with local people often complaining that they receive only minimal compensation when the government sells tracts to developers in lucrative property deals.

Attempts to occupy disputed land frequently result in violent clashes, as police and armed gangs are brought in to enforce the will of local officials.