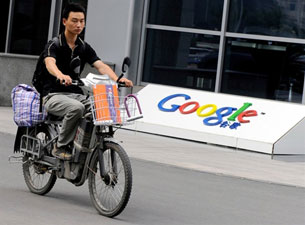 A man riding a motorcycle past the logo of Google's China headquarters in Beijing, June 30, 2010.
AFP

Chinese government controls over the Internet seem set to intensify with the closure of a high-profile literary magazine run by a popular blogger, and further controls on overseas sites, including Google, netizens said.

"Maybe there are too many relevant officials in China's relevant departments," Han wrote on his blog after announcing that his literary magazine "Party" would close.

Han attributed the closure to "too many people with the ability to turn art and literary works into cultural relics," though he stopped short of confirming online speculation that the magazine had folded after a dispute with Chinese censors over content.

"After prudent consideration... I have decided to freeze and seal up the 'Party' indefinitely and dissolve the team," Han wrote on his blog Tuesday.

A number of reports were circulating on blogs, forums and microblogging services that users were unable to access Google Maps in Chinese or English.

Indeed, any Web addresses containing the Google domain name appeared inaccessible, according to a netizen identified as "Jason".

"There have been problems with the route I use accessing some overseas sites, including Google.com and Yahoo.com," he said. "I can't get onto either of those."

"It also includes the Microsoft website and any address containing the keyword google.com," he added. "This is clearly happening again and again."

"I think this is the result of the Great Firewall," Guo said.

The authorities use a system of "sensitive words" to weed out content that the government deems subversive, including in recent days the name "Liu Xiaobo" and the words "2010 Nobel Peace Prize."

"Netizens in other places are saying that it's any address, including the keywords 'google.com' and 'yahoo.com,'" he said.

Guo said he thought the block would be temporary, however.

"Jason" said Gmail's secure server was still accessible from China, however. "You can use Gmail via https and the private search facility," he said.

"Some of the search results on Google Maps, Google News and Google Images aren't censored," he added.

"I think this is because the Great Firewall isn't evenly implemented across the country."

The access problems sparked widespread discussion on the microblogging service Twitter, with some users calling on those who had experienced access problems to complain to their Internet service provider.

Others suggested a link between the blocks and the debut of China's homegrown search engine, Goso.cn, launched this week by the People's Daily, the mouthpiece of China's ruling Communist Party.

The move comes as Chinese official media seek to broaden their influence over online public opinion.

Goso, the first Chinese search engine backed by a state media organization, was launched in order to boost "China's say on the Internet" and aims to become "the most influential search engine platform" in the country, according to its website.

Baidu had 73 percent of the China search market in the third quarter, while Google's share dwindled to 21.6 percent, data by research firm Analysys International showed.

Google effectively shut down its Chinese search engine in March, saying the move was prompted by cyberattacks originating in China, and re-routing mainland users to its uncensored site in Hong Kong.

Han Han shot to fame in spite of tight controls over Chinese Web content, clocking up more than 440 million hits on his blog.

Han was named by Time magazine as among the world's 100 most influential people, along with US President Barack Obama and pop star Lady Gaga.

State media said all 500,000 copies of "Party", which included articles by other writers, were sold just a few days after its release, but Han put the total sales at 1.5 million.

Reported by Ding Xiao for RFA's Mandarin service and by Bi Zimo for the Cantonese service. Translated and written in English by Luisetta Mudie.