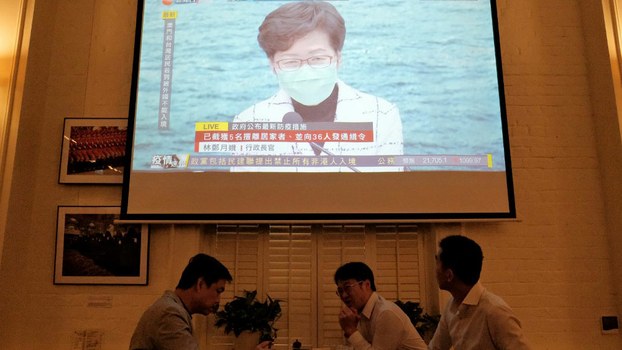 Friends have a drink as a projection is shown of a live press conference held by Chief Executive Carrie Lam, wearing a face mask as a precautionary measure against the COVID-19 coronavirus, in Hong Kong, March 23, 2020.

Authorities in Hong Kong said on Monday they would close the city's airport arrivals to non-residents amid a surge in coronavirus cases in the city, where new infections had previously been slowed by containment measures.

"After more than two months of epidemic prevention work, during which time the situation has been constantly changing, based on expert opinion, we are bringing in these measures based on their effectiveness," Lam said, adding that the ban is currently indefinite.

"We are basing our decisions on science, on facts and figures, on evidence," she said. "The politics of pressure are not something that come into the formula."

"It would be very risky to base public health positions just because certain people have demanded ... it."

By Monday, Hong Kong had 356 confirmed cases of COVID-19 and four deaths, more than doubling the number of cases since the beginning of March.

Lam's administration has faced growing calls for the city close its borders, especially in the early weeks of the COVID-19 epidemic, when people were bringing the virus from mainland China.

A two-week ban on transit passengers will also come into effect on Wednesday.

Non-residents arriving from mainland China, Macau or Taiwan will still be allowed in, as long as they haven't traveled anywhere else in the world in the past 14 days.

A 14-day quarantine rule that had previously applied to arrivals from mainland China and the rest of the world will now also be applied to people arriving from Macau and Taiwan.

Anyone showing symptoms of COVID-19 after flying into the city has been taken immediately to coronavirus testing centers, in measures which took effect on March 20.

Those who test positive for the virus are being taken to hospital, while others are being allowed to go home to quarantine themselves, state broadcaster RTHK reported.

Senior microbiologist Ho Pak-leung of the University of Hong Kong said the city has seen a sudden upsurge in coronavirus cases in recent days.

He called for an immediate, and enforceable, lockdown and the closure of public venues.

"Can't they suspend licenses temporarily for some high-risk venues such as wedding venues and bars?" Ho said. "They could also run reduced timetables on public transportation."

"If it becomes inconvenient to take public transportation, then people won't go out as often," he said. "We definitely need to implement social distancing."

Lam's announcement came amid ongoing social tensions, as a population exhausted by police violence over months of anti-extradition and pro-democracy protests has repeatedly tried to put pressure on its government to act decisively to stem the epidemic in the city of seven million people, who live in some of the most densely populated areas on the planet.

Police once more fired tear gas at a gathering of around 100 protesters in the New Territories town of Yuen Long, eight months after a brutal attack on passengers in the Yuen Long MTR station by gang-linked thugs wielding bats and rods.

The white-clad attackers -- some of whom were later confirmed to have links to Hong Kong's criminal gangs, the triads -- laid into passers-by and passengers on a train in the station on July 21, 2019, beating them up with rods and sticks and leaving 45 people in hospital.

Hong Kong police failed to respond to more than 24,000 emergency calls from the area as the white-shirted mob ran amok, bludgeoning passengers for 39 minutes before police arrived on the scene, leaving 45 people in hospital.

Video footage at the time showed police officers chatting to men who closely resembled the attackers.

Police have said the protesters had "provoked" the attackers, but there is scant evidence on video footage to support this view.

Thirty-seven people, some of whom have links to triad organizations, were arrested in the wake of the attack, and seven of them face charges of "rioting."

Under the "one country, two systems" framework agreed before the 1997 handover to Chinese rule, Hong Kong was promised the maintenance of its freedoms of speech, assembly and political participation.

The protests that erupted in June 2019 in response to plans to allow extradition to mainland China were largely triggered by the erosion of those freedoms, particularly following a series of high-profile interventions by the ruling Chinese Communist Party in the city's political life, including the debarring of pro-democracy lawmakers and would-be election candidates for their political views.

Frontline protesters, eyewitnesses, journalists and human rights groups have repeatedly said that the majority of violence during the protests has originated with the Hong Kong police, who have been widely criticized for the excessive use of tear gas, water cannon, pepper spray, as well as both non-lethal and live ammunition weapons on unarmed protesters.

Reported by Man Hoi-tsan and Lu Xi for RFA's Cantonese and Mandarin Services. Translated and edited by Luisetta Mudie.