Many, but not all, Chinese activists detained by police have returned home after Nobel prize ceremony.
2010-12-29
Tweet 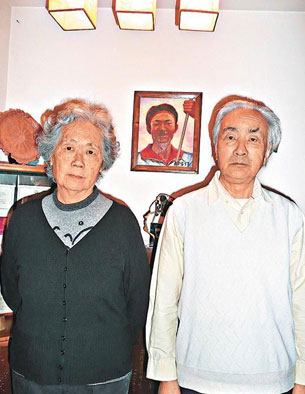 Ding Zilin and her husband Jiang Peikun in an undated photo.
RFA

A retired university professor whose teenage son was killed in the 1989 military crackdown on the student-led pro-democracy movement in Beijing has been allowed to return home after being held under 74-day house arrest in another city.

"They didn't reconnect my phone until after we got home, until Dec. 21," said Ding Zilin from her Beijing home.

"After that, I wasn't able to answer the phone because I was sick, so I pulled the plug out," said Ding, adding that she had suffered from a cold or flu virus since returning home.

"I am feeling a little bit better today, so I answered it," said Ding, who has campaigned vigorously with the Tiananmen Mothers group.

The group wants the authorities to overturn the current official verdict on the 1989 Tiananmen unrest and allow a public reckoning with the bloody crackdown.

On June 4, 1989, after weeks of protests in Tiananmen Square, Chinese troops backed by tanks crushed the demonstrations. Rights groups and witnesses said they expected several hundred to several thousand people were killed in the crackdown, but the government has never released an official casualty count.

"I have written an article about my time under house arrest online, so maybe you could take a look at that. My husband posted it online yesterday evening," Ding said.

The article, penned by Ding's husband Jiang Peikun, said the couple had been taken to the eastern city of Wuxi following the Oct. 8 announcement that Chinese pro-democracy activist Liu Xiaobo had won the Nobel Peace Prize.

"For 74 days until Dec. 20, we were both 'disappeared,' vanishing from society without a trace," the article said. "We were cut off from all connection with relatives, comrades,and friends in China and overseas."

"From our point of view, the terms 'harmonious society' or 'rising superpower' are both premature. The words 'Tiananmen Mothers,' 'June 4 victims' families,' and 'dissidents' have made a deep imprint upon us," it said.

The couple had previously been held in a similar manner for 50 days.

Fellow Tiananmen Mothers activist Zhang Xianling said the authorities had lost all sense of proportion in the wake of Liu's Nobel prize, which Beijing slammed as disrespectful to its legal system.

"They have really gone too far in their case," Zhang said.

"They haven't gone this far in 20-odd years. This Nobel prize has hit [the Chinese government] very hard."

"They thought they could buy support through economic diplomacy, and that they could cow people so as to control the Nobel prize outcome. They never thought that it wouldn't be successful," Zhang said.

Beijing stepped up pressure on political activists when Liu, currently serving an 11-year jail term for subversion, was named the Nobel prize recipient.

Chinese officials refused to attend the prestigious ceremony, which took place in Liu's absence in Oslo, Norway, on Dec. 10, and put strong pressure on diplomats from other countries to boycott the event.

Many, but not all, of the Chinese activists detained or taken out of town by police have returned home after the award ceremony.