Beijing Hits Back After Trump Tweets About 'The Chinese Virus' 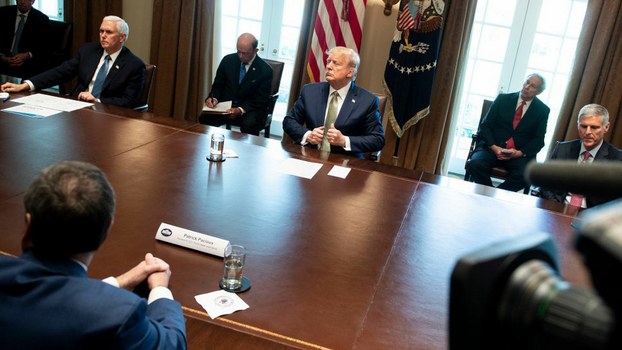 US President Donald Trump and Vice President Mike Pence meet with hotel and tourism executives in the Cabinet Room of the White House about the effect of the novel coronavirus, March 17, 2020.

Washington and Beijing escalated their war of words over the origin of the COVID-19 pandemic on Tuesday, with China voicing "strong anger" after repeated comments by U.S. President Donald Trump referring to the pathogen as "the Chinese virus."

Trump had said via his Twitter account Tuesday morning that "Some [U.S. states] are being hit hard by the Chinese Virus, some are being hit practically not at all."

He had earlier referred to "the Chinese Virus" in a tweet on Monday in which he promised government support to industries affected by the pandemic, including airlines.

China, which has been at pains to emphasize that the origins of the coronavirus remain unconfirmed, said it was "strongly indignant" about the phrasing of the U.S. president's tweet.

"Some politicians in the U.S. associated the coronavirus with China, and smeared China," foreign ministry spokesman Geng Shuang told a regular news briefing in Beijing on Tuesday.

"China expresses its strong anger and opposition to that. We call on the U.S. to stop finger pointing at China," Geng said, calling on Washington to "immediately stop its unjustified accusations against China."

Trump later defended his comments at a news conference.

"It did come from China, so I think it's very accurate," he said, adding that he used the expression to hit back at China's disinformation campaign blaming the U.S. military for the virus.

"China was putting out information which was false," he said.

"I didn't appreciate the fact that China was saying that our military gave it to them. Our military did not give it to anybody."

State-run news agency Xinhua weighed in, saying in a commentary that using "racist and xenophobic names to cast blame for the outbreak on other countries can only reveal politicians' irresponsibility and incompetence which will intensify virus fears."

The renewed spat came after Secretary of State Mike Pompeo spoke by phone with Chinese Politburo member Yang Jiechi, objecting strongly to attempts by Chinese officials to "shift blame for COVID-19 to the United States."

"The Secretary stressed that this is not the time to spread disinformation and outlandish rumors, but rather a time for all nations to come together to fight this common threat," Spokesperson Morgan Ortagus said in a statement.

Chinese health officials initially said they had traced the newly detected coronavirus to the now-shuttered Huanan Seafood Market in the central city of Wuhan, where the epidemic first emerged in December.

But the ruling Chinese Communist Party's propaganda machine has ordered officials to start questioning the narrative that the virus came from China.

Foreign ministry spokesman Zhao Lijian tweeted last week that "patient zero" in the global pandemic may have come from the United States.

"It might be US army who brought the epidemic to Wuhan. Be transparent! Make public your data! US owe us an explanation," Zhao wrote.

Pompeo has meanwhile repeatedly referred to the coronavirus as the "Wuhan virus" in spite of advice from the World Health Organization (WHO) not to stigmatize particular locations.

According to Xinhua's account of the phone call between Yang and Pompeo, Yang warned the U.S. that "any scheme to smear China will be doomed to fail."

"Some US politicians have frequently slandered China and its anti-epidemic efforts and stigmatised the country, which has enraged the Chinese people," the agency quoted Yang as saying.

Beijing has launched an overseas propaganda offensive in recent weeks, questioning whether the coronavirus originated in the country.

The diplomatic and media campaign has two main aims: to play down the cover-up of the emerging coronavirus outbreak by party chiefs in the central Chinese city of Wuhan, and to push forward the narrative that the virus may not have originated in China at all, according to an expose published by the Catholic French language newspaper La Croix.

Chinese ambassadors around the world have been ordered to publicly question the idea that the coronavirus originated in Wuhan, the paper said.

Chinese government censors, usually quick to delete accounts sending out information about the epidemic not previously approved by the ruling party, appear to be turning a blind eye to growing conspiracy theories that the virus originated in the United States and was covered up by the Trump administration.

Meanwhile, officials are now putting out the line that the epidemic at home is under control, and that China stands ready to lend a hand to foreign countries more recently hit by the epidemic, suggesting that less authoritarian regimes than its own may not be able to implement the same draconian lockdowns that left tens of millions of Chinese people confined to their homes for nearly two months in a bid to halt the disease's advance.

Political analysts have told RFA that the ruling party's Central Propaganda Department is behind a number of recent international statements from Chinese diplomats on the coronavirus.

Reported by Fong Tak-ho and Pan Jiaqing for RFA's Cantonese Service, and by the Mandarin Service. Translated and edited by Luisetta Mudie.

Yes, President Trump said Chinese Virus . China responded by saying that this isa Cold War mentality. I may add a few more terminologies that the Secretary State said Wuhan virus and the Epoch time said CCP Virus. China said that U.S. military
planted virus in Wuhan. What sort of mentality it is.

In early days, China reported that the virus was discovered in a sea
food market in Wuhan City. Are we suppose to say sea food virus
from China? Does it help a Chinese person's feeling better.