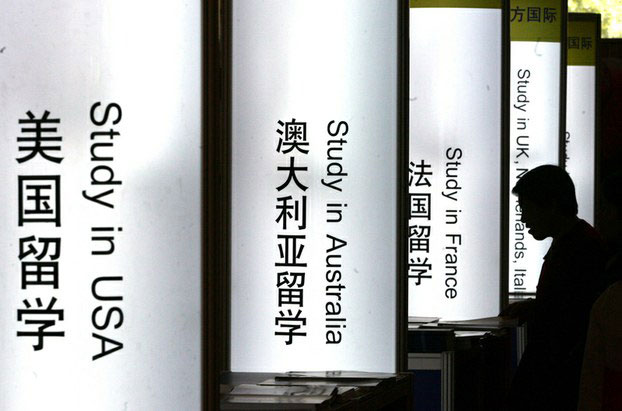 The ruling Chinese Communist Party has begun to clamp down on the number of students seeking to study overseas, in an apparent bid to stave off Western influences on its young people, recent reports indicate.Education officials in Beijing have already stopped approving international programs in the capital's high schools that aim to prepare students for degree-level study in overseas universities, a service for which they had been charging high fees.And in Shanghai, such programs, a more recent phenomenon than the long-established international schools, have been ordered to charge the same fees as regular high-schools so as to avoid tension over growing social inequality, the Wall Street Journal said in a report this week.According to government figures, some 459,800 Chinese students pursued overseas studies, compared with just 114,682 a decade earlier, representing a rise of 11 percent from the previous year, the report said.A rapid exodus of university students from China in recent years has sparked fears of a more permanent brain drain, as the more privileged sectors of society seek to keep their options open in the face of growing uncertainty about the future.Chinese students accounted for nearly one third of international student enrolled in U.S. colleges and institutions during the academic year 2014-2015, numbering more than 300,000, a figure that rose by 10.8 percent compared with the previous academic year, according to the website of the Institute of International Education.

Now, Chinese high schools are cashing in on the huge popular demand for an international education by offering international programs, often in partnership with overseas institutions.The programs are run as independent schools, using existing school facilities, and often hire foreign teachers, the WSJ report said.Beijing No. 4 High School charges fees of 100,000 yuan (U.S.$15,700) a year for its international program, while students in regular high school pay just  800 yuan per semester, it said.For that, students can sign up for advanced placement and international baccalaureate classes, many of which use English as a medium of instruction.Xie Jiaye, head of the New York-based Chinese Association of Science and Technology U.S.A., said that students who enroll in such international programs don't always have a clear edge over those in mainstream schooling, however."The international program students I have come across tend to have better English, especially their spoken English, which doesn't sound that different from kids overseas," Xie said."But the teaching in other subjects is actually somewhat weaker than that in mainstream education."He said such programs shouldn't price poorer students out of the market, however."International schools [and programs] should be accessible to all."

Sun Yuanzhao, visiting professor at Beijing University, said international programs reflect a huge diversification within the Chinese education system."There are two aspects at work in the background: supply and demand," Sun said. "How should we meet them?"He said international programs might also offer an alternative to traditional Chinese education, with its focus on rote-learning."We should give children an environment in which they can broaden their minds, not use traditional, spoon-feeding methods of education," he said.According to Xie, any attempt by President Xi Jinping's administration to rein in the education system won't help China's development."They should take a broad-minded view, because China has turned its face towards the world since economic reforms began [in the 1980s)," Xie said."They shouldn't be divorced from reality or cutting themselves off from the world in any area of life."The most recent Times Higher Education global rankings showed that 21 of the top 100 Asian universities were Chinese.Last October, Xi's administration set out targets for the number of Chinese universities expected to achieve world-class ranking, with a matching funding scheme announced in November.Last year, the richest 30 Chinese universities spent around U.S.$1 billion in funding, much of it on research or research facilities, according to a report from the Inside HigherEd website.Reported by Yang Jiadai for RFA's Mandarin Service. Translated and written in English by Luisetta Mudie.