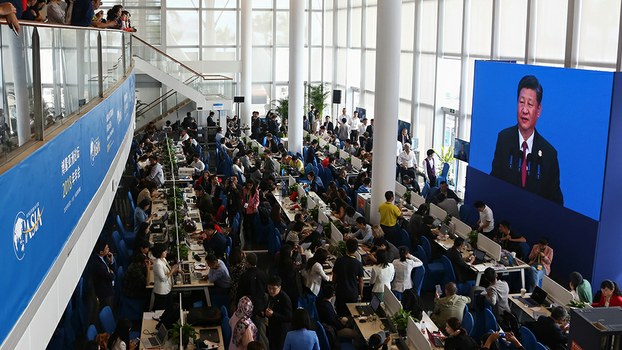 Journalists watch a screen showing Xi Jinping deliver a speech during the opening of the Boao Forum for Asia Annual Conference 2018 in Hainan province, April 10, 2018.

Authorities in the eastern Chinese province of Jiangxi have formally arrested an author on public order charges after he penned an article criticizing a recent speech by President Xi Jinping.

Ye Qiming was detained in mid-April by state security police officers from Jiangxi's Jiujiang county on suspicion of "picking quarrels and stirring up trouble."

He is currently being held in the police-run Jiujiang Detention Center.

Ye had penned an article skeptical of Xi's speech at the Boao Forum for Asia on Apr. 10, in which he vowed to usher in a "new phase" of openness in China's economy.

The speech promised China would lower tariffs for autos and other products and enforce the intellectual property rights of foreign companies.

Xi called on countries to "stay committed to openness, connectivity and mutual benefits, build an open global economy, and reinforce cooperation within the G-20, APEC and other multilateral frameworks," he said.

Ye took issue with Xi's claims in an article titled "Do we really believe in open access to our markets instead of a trade war?"

The article listed a number of precedents for the Chinese government making claims and then not following through.

Ye said it would be a simple matter to test Xi's claims.

"Just watch and see how long this article lasts," he wrote. "Wait and see whether people can discuss it on WeChat groups."

"Then we'll know how sincere this talk of openness is."

The article was deleted from China's tightly controlled internet, and Ye was detained soon after posting it.

Rights activist Song Ningsheng said a lawyer appointed by Ye's family had been prevented from visiting him in detention, with officials citing "endangering state security" as a reason for the refusal.

"Ye Qiming wrote these things because this is the reality of China at the moment," Song told RFA. "Everyone has a red line, and Ye Qiming definitely won't be making concessions, and he definitely won't plead guilty."

"He is a very honest and straightforward person."

Song said his family members are themselves now under close surveillance by state security police.

"My friend went to try to find him, and the family immediately reported him," Song said. "It's very simple. They have been frightened into doing this. They are worried that they could end up in the same place as him if they don't cooperate with the authorities."

Fellow activist Huang Meijuan said Ye's parents don't understand anything about his detention, or the reasons behind it, and she fears Ye could be facing a jail term.

"They told him he could write articles, but that he should steer clear of writing anything opposing the system," she said.