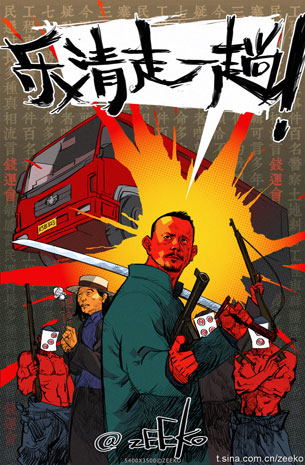 Authorities in the eastern Chinese city of Wenzhou have detained a truck driver after a land activist was killed in a traffic accident, sparking a public outcry and harsh online criticism.

Qian Yunhui, the elected chief of Zhaiqiao village in Zhejiang province, died instantly on Dec. 25 when he was run over by a truck.

Photos purporting to show his mangled remains were circulated by Chinese netizens, sparking widespread speculation that Qian, 53, had been the victim of a planned assassination linked to his campaign against the appropriation of Zhaiqiao village land for development.

Netizens on tianya.com and Netease, as well as on the popular microblogging service run by web portal sina.com, all circulated the photos.

They also seemed to assume that Qian's death was linked to his activism, in spite of police claims that he died in a hit-and-run accident.

But Qian's relatives said they were unable to comment by telephone on the village chief's death.

"We can't talk about this properly on the telephone," Qian's daughter-in-law A Ping said on Tuesday. "If you want to know more, you should come here."

She said Qian's daughter and her husband had been detained by police.

"My sister-in-law and her husband were taken away, and they were beaten while they were there," A Ping said. "They even beat them when they went to the toilet."

Qian's death has sparked a flurry of online comment and activity, including manga art depicting Qian as a hero, and a Chinese-language Wikipedia page of his own.

Official media reported that local police had detained the unlicensed driver from neighboring Anhui province, along with six residents who attacked police when they arrived at the accident.

Local authorities dispatched a troop of more than 1,000 riot police to the village and forcibly removed Qian's body, sparking clashes with local villagers in which many were injured, residents said.

Qian's daughter and her husband were detained during the clashes, relatives said.

"No one is going to ask them for the body back," A Ping said. "They wouldn't give it to us anyway."

Repeated calls to the cell phones of a number of Zhaiqiao villagers went unanswered on Monday.

"The elder daughter told me ... that the family is being prevented from saying anything," said Hubei-based rights activist Liu Feiyue, who runs a civil rights watch group.

"The younger daughter and her husband were weeping at the scene, and they were taken away," he said.

Liu said a number of local residents had had their homes searched by the authorities in the wake of Qian's death.

A duty officer who answered the phone at the Wenzhou municipal Party committee office said they were unable to make a formal announcement yet.

"I learned about this on the Internet like everyone else," the official said. "Until we get all the relevant documents, we can't make a formal answer to any inquiries."

The Wenzhou municipal government, which administers Zhaiqiao village, said in a statement on its website Tuesday that it had launched a full investigation into Qian's death.

"The deputy provincial governor and municipal Party secretary Chen Derong ... called on those responsible in Party and government ... to get to the truth of what happened and to deal with the situation in a timely manner according to the law," the statement said.

But Liu said many of the villagers have been frightened into silence.

"Many of those who are close to the situation have come under a huge amount of pressure, and none of them dares to speak out," he said.

Qian's continual campaign for compensation began in 2005, after nearly 150 hectares (370 acres) of land was seized by Zhejiang Provincial Energy Group.

Villagers told the official Global Times newspaper that they had yet to receive any of the 65 million yuan (U.S. $10 million) that was promised them in compensation.

"This is not a traffic accident. It is killing someone for the seizure of the land," one user said on a local chat forum.

China's 420 million netizens frequently take their grievances and complaints online, in a country where the media is subject to strict government controls and there are scant opportunities for public protest.

Reported by Ding Xiao for RFA's Mandarin service and by Lin Jing for the Cantonese service. Translated and written in English by Luisetta Mudie.