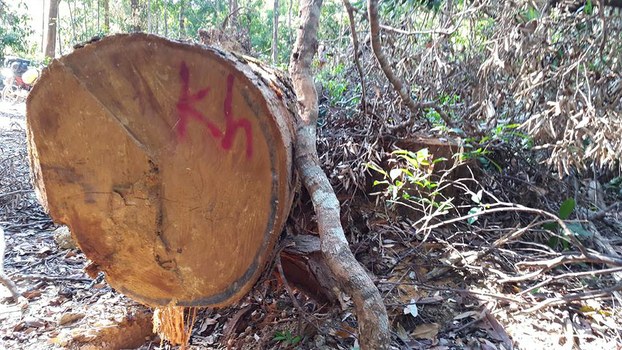 Activist Heng Sros told RFA’s Khmer Service that workers from Vietnam routinely enter Vireak Chey to log trees of at least 50 centimeters (1.6 feet) in diameter with chainsaws, and transport the timber to six depots operated by Vietnamese companies on the outskirts of the park.

“Around Vireak Chey National Park, during the rainy season, they [the companies] send their workers [from inside Vietnam] to cut trees, and during the summer time they export the illegally logged timber via trucks across the border to Vietnam,” he said.

Heng Sros said Cambodian border guards are complicit in the scheme, and suggested that if they did not act to stop the logging, the old growth trees in Vireak Chey “will be completely gone in the near future.”

In the meantime, he said, the guards “carefully prevent anyone from walking around because they want to make sure that nobody sees or takes pictures of the trucks exporting the illegal timber” through recently opened border gates at Taveng and Andaung Meas districts in Rattanakiri.

“The border security guards are armed with guns and are extremely strict,” he said.

But a national park guard, who spoke to RFA on condition of anonymity, told RFA that his superior officer had repeatedly accepted bribes from at least one Vietnamese processing company in exchange for allowing it to smuggle illegally logged timber across the border to Vietnam.

“This border gate was opened exclusively to smuggle timber to Vietnam, and no one else is allowed to cross here,” he said.

“If someone dares to report about this smuggling, they would get into trouble and be jailed … I was told that the owner of the [Vietnamese] illegal timber company has threatened people not to get involved with their business.”

Vireak Chey National Park—which is bordered by both Vietnam and Laos—covers more than 33,000 hectares (81,545 acres) of forestland Stung Treng’s Siem Pang district, and in Rattanakiri’s Andaung Meas and Taveng districts.

The land was preserved as part of a royal decree by Cambodia’s late King Norodom Sihanouk in November 1993, and Prime Minister Hun Sen has since deployed security forces to the area to guard it.

However, since earlier this year, local authorities and officials from the Ministry of Environment have prohibited activists and reporters from visiting the area, and threatened those who do so with jail.

San Chey, the executive director for the Affiliated Network for Social Accountability (ANSA), has called on official from the Ministry of Interior to investigate the recently opened border gates at Taveng and Andaung Meas districts in Rattanakiri, saying they are channels for trafficking illegal timber and other smuggled goods.

Last week, Heng Sros told RFA that local authorities have obstructed his and other environmental activists’ work since the dissolution of the opposition Cambodia National Rescue Party (CNRP), and urged Hun Sen to order officials with his ruling Cambodian People’s Party (CPP) to cooperate with them.

He said that despite several announcements by Hun Sen that he would undertake “serious measures” to eradicate illegal logging, the practice continues unabated in northeast Cambodia.

However, he said, when he and other environmental campaigners work to fight forest crimes, they are labeled “color revolutionaries” by local authorities—echoing similar allegations of plotting to overthrow the government that were leveled against the CNRP, leading the Supreme Court to dissolve the party in November.

Other activists said their teams are regularly monitored by local authorities, who accuse them of “inciting area villagers” while investigating illegal logging and other forest crimes.

They said that local authorities had become even more hostile since the dissolution of the CNRP and amid a months-long crackdown by Hun Sen on the political opposition, NGOs and independent media that is widely seen as part of bid to stamp out criticism of his government and ensure the CPP remains in power following a July 29 general election.