A former employee of a Cambodian rights watchdog is released at the end of his sentence for distributing political leaflets.
2012-05-30
Tweet 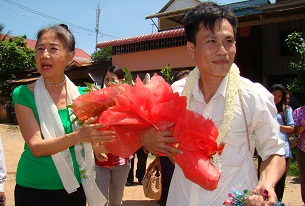 A Cambodian activist was released Wednesday after serving a two-year prison sentence for allegedly distributing anti-government leaflets, a conviction his rights group has called “outrageously flawed.”

Leang Sokchouen, a former Takeo province staff member of the Cambodian League for the Promotion and Defense of Human Rights (LICADHO), was greeted with garlands of flowers by over 100 local and international activists and supporters as he left the Kandal provincial prison.

“I am very sad because I didn’t commit any crime, and yet the court imprisoned me for two years. It is a great injustice against me,” Sokchouen said outside the prison.

LICADHO President Pung Chhiv Kek also maintained Sokchouen’s innocence.  “I am happy Leang Sokchouen was released today, but I am still disappointed in [the courts],” she said.

Sokchouen’s release marks the end of a two-year ordeal that LICADHO and international rights groups have said exposes injustices in the judicial process in Cambodia.

After his arrest in May 2010, Sokchouen was originally convicted on charges of disinformation following a trial rights groups said had numerous procedural flaws.

He was handed a two-year prison term for helping distribute leaflets critical of celebrations of the January 7, 1979, invasion of Cambodia by Vietnamese forces.

The ruling Cambodian People’s Party commemorates that date as the end of a brutal rule by the Khmer Rouge regime but opponents say it also marks the beginning of a 10-year Vietnamese occupation that many remain embittered over.

In July 2011, an appeals court in Phnom Penh upheld Sokchouen’s two-year sentence while switching the charges against him from disinformation to incitement, without explanation.

The new charges, which rights groups say he did not have an opportunity to refute, were under a provision of a new criminal code that did not exist at the time of the offense.

Sokchouen continued his appeal, and at a hearing on May 25, just five days before his release, Cambodia’s Supreme Court upheld the July 2011 verdict, in a move LICADHO called the “final rubber stamp on the outrageously flawed process.”

“Sokchouen's case has consistently revealed an utter lack of integrity by Cambodia's judiciary,” Kek said in a statement after the final verdict.

Sokchouen’s release comes after Cambodia’s civil society groups were dealt a blow in April with the death of prominent environmental activist Chut Wutty, who was shot while investigating illegal logging operations in a protected area.

Cambodian Prime Minister Hun Sen's government, which rights groups accuse of having a dismal rights record, has drafted a new law regulating associations and NGOs that grants the government broad authority to decide which groups are allowed to operate.