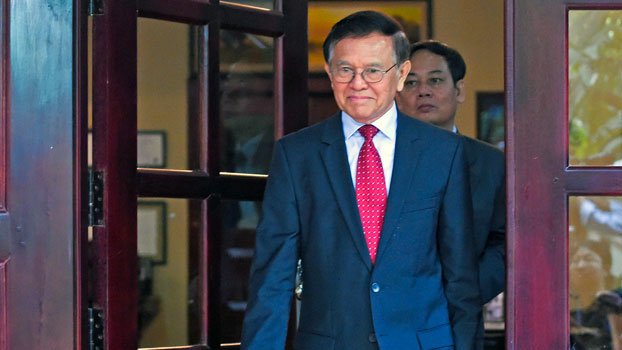 Cambodia's former opposition leader Kem Sokha steps outside after a meeting with US Ambassador to Cambodia Patrick Murphy at his home in Phnom Penh, Nov. 11, 2019.
AFP

The court declared Monday that the investigation of Kem Sokha on charges of conspiring with a foreign power had produced enough evidence that he must stand trial, despite the easing of restrictions on his house arrest last month and requests by his lawyers to drop his case.

The court has yet to schedule a hearing date.

In a signed compliant to the court, the four attorneys on Kem Sokha’s defense team argued  that the investigating judge’s decision contradicted criminal procedures because he has neither cancelled judicial supervision of the former political opposition chief nor responded to their request for his charge to be dropped.

The complaint also says that the investigation remains incomplete because it has failed to examine Kem Sokha’s alleged accomplices, and the court has not revealed the country he has been accused of conspiring with.

“Normally, when an investigation is concluded and a closing order is issued, the investigating judge has to lift any bans or cancel judicial supervision imposed upon the [accused],” said Pheng Heng, one of Kem Sokha’s lawyers.

“But in this case he has not done so,” he said. “Therefore, according to the law, we have the right to appeal against the indictment [that sends Kem Sokha to trial].”

A Justice Ministry spokesman told RFA that Kem Sokha’s defense team has the right to file an appeal.

“The investigating judge issued the closing order by sending the case to trial, so now the date of the trial will be set,” he said. “The defense team has right to appeal, and the appeal court will review its appeal.”

On Nov. 19, Kem Sokha’s legal team formally appealed to Phnom Penh Municipal Court investigative judge Khy Rithy to drop all charges against their client so he can return to his role as CNRP president.

The move came nine days after authorities said that Kem Sokha was free to leave his house but was not allowed to travel outside Cambodia or participate in political activities.

Authorities arrested Kem Sokha in September 2017, and Cambodia’s Supreme Court dissolved the CNRP and banned 118 of its elected officials from politics two months later for its alleged role in a plot to overthrow the government.

The actions were part of a broader crackdown by Prime Minister Hun Sen on the political opposition, NGOs, and the independent media that paved the way for his ruling Cambodian People’s Party (CPP) to win all 125 seats in parliament in the country’s July 2018 general election.

Opinion:
I would like to say Mr. Kem Sokha is a
good man. He likes his country. He work for humans right. He relishes to challenge
openly through democratic election.
I like Mr. Kim Sokha's good demeanour.
He is benign, and wouldn't hurt animals.
so there is no way that he betrayed his country. The current is on the wrong side. Fear of losing election and bizarrely accuse an innocent man.
Sinner.

If Cambodia can pay tax for EBA, Cambodia products will not be bought by EU consumers because of human rights and else abuse by Hun Sen government.