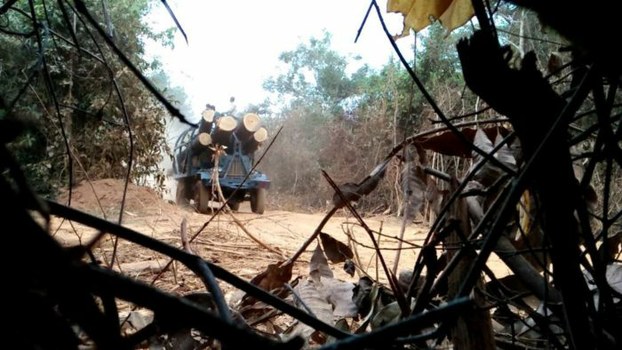 Environmental activists in Cambodia said Friday that local authorities have obstructed their work since the dissolution of the opposition Cambodia National Rescue Party (CNRP), and urged Prime Minister Hun Sen to order officials with his ruling Cambodian People’s Party (CPP) to cooperate with them.

However, when he and other environmental campaigners work to fight forest crimes, they are labeled “color revolutionaries” by local authorities—echoing similar allegations of plotting to overthrow the government that were leveled against the CNRP, leading the Supreme Court to dissolve the party in November.

“Our work has been frustrated by the local authorities, so we are afraid to inform them of our activities—if they knew we were continuing to fight forest crimes they would not allow us to do so,” he said.

Heng Sros said he and his team members have been threatened by both local authorities and illegal loggers “on several occasions,” and no longer feel safe.

“I would like to call on Prime Minister Hun Sen to tell his subordinates to work with the villagers and civil society organizations to protect the forest,” he said, adding that the authorities “should not restrict people” from working to save the environment.

“I would also like to call on Hun Sen to take serious actions against illegal loggers who transport timber and logs to Vietnam. The government should be not just be good at reporting on this problem, but also taking concrete actions to curb it.”

Environmental activist Lim Kimsor, who works to protect forests in Koh Kong province, shared similar concerns as those voiced by Heng Sros, and said her team is regularly monitored by local authorities, who accuse them of “inciting area villagers.”

She said that local authorities had become even more hostile since the dissolution of the CNRP and amid a months-long crackdown by Hun Sen on the political opposition, NGOs and independent media that is widely seen as part of bid to stamp out criticism of his government and ensure the CPP remains in power following a July 29 general election.

“They constantly accuse us of inciting the people to revolt or act against the local authorities, so our work has been hamstrung,” she said.

“Now, even visiting villagers to inquire after their well-being must be done under close watch by the authorities. To avoid this, we sometimes have to visit villagers at night, and we have begun to feel like thieves who are afraid to carry out their activities during the daytime.”

Lim Kimsor was formerly a coordinator with the environmental group Mother Nature before the organization was formally shut down in September at the request of its director, Buddhist monk Prum Thomacheat, who said that he and other members were being threatened by government authorities over their activism.

Although she no longer works for Mother Nature, she continues to assist local communities in protecting their natural resources, and expressed frustration that authorities choose to prevent her from doing her work.

“Some of the local authorities have colluded with illegal loggers and that has really set back our efforts to stop the practice,” she said.

“However, I won’t lose faith in the local villagers, and I will encourage them to continue their fight to protect their forests and community.”

Also on Friday, a group of United Nations human rights experts called on Cambodia’s authorities to respect and ensure the right to freedom of opinion and expression, following a proposal by the National Election Committee (NEC) for a code of conduct for covering the country’s upcoming election.

The code, proposed last month by the NEC—the country’s top electoral body—would ban journalists from including “personal opinion or prejudice” in their reporting and publishing news that “affects political and social stability.”

Violations of the NEC’s code, which would also prohibit reporters from conducting interviews at polling stations and broadcasting news that could sow “confusion and loss of confidence” in the election, will be punishable by fines of between 5 million and 30 million riels (U.S. $1,225 and $7,355).

In a statement Friday, Rhona Smith, David Kaye, and Clément Nyaletsossi Voulé—the U.N. special rapporteurs on the situation of human rights in Cambodia, the promotion and protection of the right to freedom of opinion and expression, and the rights to freedom of peaceful assembly and of association—said prohibitions in the code “raise serious concerns relating to media freedoms.”

“These prohibitions use broad and imprecise terminology that could lead to sweeping restrictions on the media that would be incompatible with international standards,” the experts said.

“Journalists have a responsibility to report on many issues in the run-up to an election, in particular controversial issues. Such reporting is an integral part of transparent and responsible media reporting during an election. It helps voters to make informed choices.”

The experts warned that the prohibitions also have a negative impact on the rights to freedom of association and peaceful assembly, which they called “necessary conditions for public participation in electoral contexts,” and noted that Rhona Smith had expressed concerns about similar ones issued before Cambodia’s 2017 commune polls in her last annual report on the situation of rights in the country.

The special rapporteurs also knocked the NEC for threatening legal action against CNRP leaders who have called for a boycott of the election in protest of their party’s dissolution and the ban on its participation in the ballot, noting that voting is not compulsory under Cambodian law.

“We encourage the Cambodian authorities to ensure that all people are freely able to express their political views and opinions—including on the option of abstaining from voting,” the experts said in response to the NEC’s claims that the calls for a boycott were affecting public order and national security, and causing confusion leading to loss of trust in the election.

“While both Cambodian and international human rights law rightly prohibit intimidation or coercion of voters, a call for boycott of an election neither coerces nor intimidates, nor does it, of itself, affect public order. Instead, it leaves voters free to decide whether to participate or not.”

Cambodia’s Council of Ministers spokesman Phay Siphan dismissed Friday’s statement, saying the experts “have no right to order Cambodia to do anything.”

He said that Cambodia is a sovereign state, where “rights and freedom are fully guaranteed,” and that the government is “not interested in such statements.”

“In the meantime, we will not tolerate any individual or group—including a U.N. body—that incites people to boycott the upcoming election,” he said, adding that “such incitement is against the law and the fundamental principle of democracy.”

Am Sam Ath, the head of investigations for local rights group Licadho, however, called the experts’ concerns “consistent with the deteriorating situation on human rights and democracy” in Cambodia, including restrictions on rights and freedom ahead of the election.

“I think the government should be more receptive to such concerns and recommendations and find ways to correct them, rather than rejecting them outright,” he said.

“When freedom of the media and information is restricted, the space of information sharing becomes very limited. People will be deprived of the information they need to make their decision.”