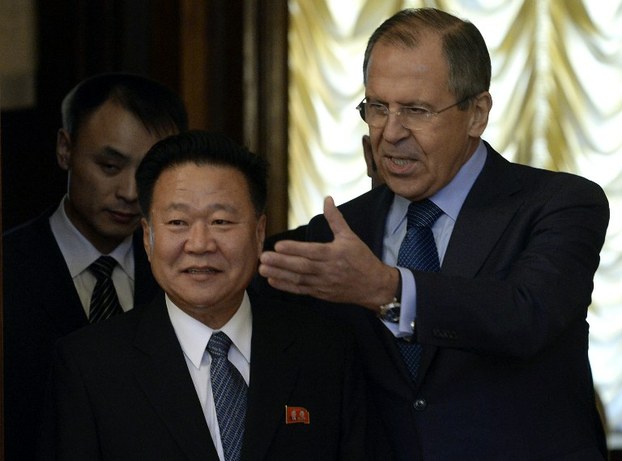 The recent Moscow trip of Choe Ryong-hae, special envoy of North Korea’s leader Kim Jong Un, attracted much attention in the world media. We have now heard speculation that Moscow may be the first destination to play host to Kim Jong Un abroad.

To some extent, these rumors have been confirmed by the Russian foreign minister, who indicated that such a meeting is not impossible.

If this happens, a summit between Kim Jong Un and Vladimir Putin will become the first-ever meeting between the young North Korean leader and a foreign head of state. There is little doubt that such a development should be welcomed by the outside world, since it might make a small contribution toward positive change in North Korea.

This year has seen a sudden and dramatic improvement in Russo-North Korean relations. The number of high-level delegations coming and going between the two capitals has reached a level not seen since the late 1980s, and there is a great deal of talk about economic cooperation between the two sides.

These developments have led many to speculate that Russia may soon replace China as the major sponsor of the North Korean regime. Indeed, on the surface, the idea does not appear all that strange. After all, North Korea has sought for decades to balance between two or even three rival great-power sponsors.

Thus, it is only natural that Pyongyang would seek to improve relations with Moscow in order to counteract what it sees as its own excessive dependence on Beijing.

It is widely expected that Russia will be willing to provide North Korea with assistance and aid grants.

However, such expectations are not realistic.

Ostensibly, Russia now looks a bit like the old Soviet Union, especially when seen from a Western vantage point. However, this vision is wrong in many important regards. Among the many differences, the Russian Federation, unlike the Soviet Union, is not a country willing to pay to advance its symbolic influence and prestige.

It might follow a rather harsh policy in the territories which, like Ukraine and Georgia, were once a part of the Soviet Union and hence are seen by the Russian state and public as within Russia’s sphere of influence.

But present-day Russia is not going to spend money in remote corners of the world merely to advance its prestige and create trouble for its strategic rivals. For today’s Russia, foreign policy is an area in which to make money, not spend it.

Therefore, even if some people in North Korea still hope to become recipients of Moscow’s largess, they are soon going to be disappointed. Cooperation between Russia and North Korea will have to be based largely on reciprocity and commercial viability, even though these principles are not all that popular in Pyongyang.

It will be difficult, though not impossible, for these two countries to conduct reciprocity-based mutually beneficial cooperation. It is true that North Korea has little to offer Russian investors.

In essence, North Korea can efficiently export mineral resources, sea food, and cheap labor. Russia, endowed with the riches of Siberia, has little interest in North Korea’s raw materials, and Russians—unlike many people in East Asia—are not known for their appetite for sea food.

While it is true that there is some demand for cheap labor in Russia, cooperation in this area has figured in relations between Moscow and Pyongyang for many years. However, the scale of this cooperation is likely to remain quite limited as well.

A lesson in reciprocity

That said, there are some areas where cooperation is indeed possible—and it will be important that this cooperation is based on mutual profits, not unilateral subsidies.

A good example is the recent shipment of Russian coal to the South Korean Pohang Steel mill via the North Korean port city of Rason, which is connected to Russia by a recently built railway. This project has some political support, but is also economically viable for both sides, and so is likely to continue.

Thus, people who worry, or hope, that the ongoing improvement in relations with Moscow will end with North Korea gaining another sponsor are wrong. The joint Russia-North Korean projects that are likely to succeed will be those that are based solely on mutual interest.

And this is a good thing. It may even help to some extent to teach North Korea’s government a thing or two about the importance of reciprocity.

Andrei Lankov, a professor at Kookmin University in Seoul, is a Russian historian, North Korea expert, and regular RFA contributor.

Not too likely that Russian tourists and business investors will start pouring into "glamorous" Pyongyang.