Chance for a New Life

A reporter takes an intimate look at North Korean teenagers adjusting to life in the South.
2009-07-24
Tweet 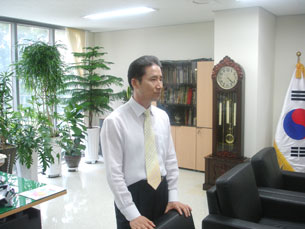 The question comes from a petite 16-year-old with a ponytail, a wide warm smile, and a long brown t-shirt that says UCLA Phys Ed in pink letters.

For a moment, I am stuck.

The pickled cabbage dish—the de facto national food of North and South Korea—is something I eat to be polite on rare occasions and in deliberately small quantities.

But there’s more at stake here than what I want for dinner.

A colleague and I have driven for two hours from the center of the South Korean capital, Seoul, to the Hangyoreh Middle High School, a boarding school for teenagers who have defected from reclusive, tightly closed North Korea to make a new life in the capitalist South.

Some 16,000 North Koreans have fled to South Korea, most in the last few years, driven for the most part by hunger, poverty, and extreme repression.

Many have suffered enormous trauma both in North Korea and en route here through China and other third countries. Most are physically stunted from lack of food in North Korea, and all lag far behind their South Korean peers academically.

Not only is the North Korean curriculum focused on glorifying the Stalinist regime, counselors say, but—as food shortages have continued—many teachers have simply abandoned their classes to buy and sell on the black market.

None of this is readily apparent to visitors at Hangyoreh, where students can stay for a year while they adjust to life in South Korea and try to catch up academically. Later on, they get preferential treatment in applying to South Korean colleges and universities—although their dropout rate remains high.

Today, we’ve spent several hours with Hangyoreh’s principal and several students, including the friendly, ponytailed girl who is now leading me to the school dining hall for dinner.

She and her schoolmates can’t be photographed or identified in any way for fear of retribution against their families by North Korean authorities, and we agreed to avoid questions about their personal backgrounds or the routes they took to get here.

This girl has asked me to identify her only as Park, and she says her parents were officials in North Korea. She hates math, loves her MP3 player, and works as a broadcaster in the school’s media center. She intensely dislikes gossip, and she loves her friends.

Park also plays the recorder at school, and when I tell her my own daughter likes to make people laugh by playing the recorder with her nose, she bursts out in giggles.

She wants to be a lawyer, she says, “because I like sticking my nose into other people’s business.”

She and her schoolmates share a dim view of the United States, a frequent target of North Korea’s vitriolic propaganda.

They see Washington as a self-important bully—a “colonial invader,” as one of them puts it –and they all want North and South Korea to unify into a single, more powerful country that Americans will respect.

“Black people and white people hate each other in America,” Park says, by way of explaining her views. "But I want to live there because it is a melting pot."

When I tell her that this is no longer the case, and that U.S. President Barack Obama is the son of an African father and a Caucasian mother, she is genuinely surprised. 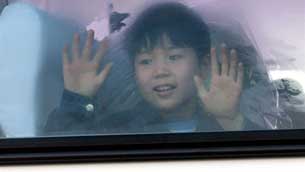 A young North Korean defector waves from a bus on its way to Seoul, Mar. 18, 2002. AFP
The kids ask me what Americans think of North Korea, and I weigh my words carefully.

Americans, I tell them, are like people all over the world in thinking mainly about their own immediate surroundings.

But those who do think about North Korea understand that North Koreans love their families just as much as everyone else does, I explain. They appreciate Korea’s unique and ancient culture.

They also think the North Korean government is far too tough on its own people, who lack any freedom whatsoever to think, speak, or act for themselves, and who risk years at hard labor for any perceived slight against the government.

The students nod, having just told me how shocked they were on arriving in South Korea to hear people cursing and railing against their own government. Now they find it funny.

They were also shocked, they say, by the height of South Korean buildings, and by the heavy air pollution in Seoul. “The air is so much cleaner in North Korea,” says another 16-year-old girl, who asked to be identified as Lee.

There are moments of intense sadness, the students say, such as when they eat a good meal and can think only of their relatives back in North Korea who have gone hungry for 15 years.

As many as two million North Koreans—up to one-twelfth of the population—are believed to have died since the mid-1990s from hunger and related illnesses.

Sometimes, they say, the girls cry uncontrollably when school staff present them with birthday cakes. Many of the students spent long, lonely years fending for themselves in China as they made their way to South Korea, and they’ve never seen a birthday cake before.

But the students are kind to each other here, they say, and for them, this is something new.

In North Korea, the popular kids “are the ones who can beat people up—they’re not popular because they they’re smart, or good at sports, or anything like that,” Park says. “It’s all about the power of the fist.”

“Students like the strong kids because they can offer protection,” Kim adds.

Hangyoreh’s tall, pensive principal, Gwak Jong Moon, interrupts us to say it’s time for dinner, and the students invite us to join them.

Park, smiling happily, leads me to the dining hall, whose large picture windows open onto wide green gardens below.

She gestures that I should help myself from the serving dishes, and then asks apprehensively, “Do you like kimchi?”

I hesitate, but only for a second.

She breaks into a wide smile. “Me too.”