'I Can Face Anything' 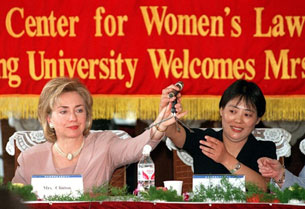 Then U.S. First Lady Hillary Clinton passes the microphone to Guo Jianmei at a panel in Beijing, June 29, 1998.
AFP

Guo Jianmei graduated from the Beijing University Law School in 1983 and was assigned to a job in a government department. She later went to work in the media, and it was as a reporter that she was first introduced to the concept of the nongovernmental organization, at the NGO section of the Fourth World Congress on Women in Beijing, 1995. She soon went on to set up a legal aid center for women, which for 15 years acted under the auspices of her alma mater, until Beijing University withdrew its official backing last month. Here, Guo talks about her life and work.

I love the work that I do now. I love my career. That is totally authentic for me. I felt as if I'd found my home. I saw so many people from NGOs, so full of positive energy, so lively, so willing to shoulder responsibility, with such an attitude towards life ... I felt as if I had found something of great meaning in life. I felt as if they were my own family. There were tens of thousands of delegates from all over the world, of different skin color, speaking different languages, wearing different clothes, from different races and faiths, but they were all talking about one thing, and that was what could be done to protect the rights of women, who make up half the world's population. At the time, Hillary said in her speech that women's rights are human rights ... We thought that was very true.

But the most important thing was that I'd seen in those NGO people something of a spirit, something that values life, and gives it meaning. You can't get that anywhere else. Not in government departments, not inside the system, nor in corporations.

I'm not the sort of languid person who just wants to pass the time and have a nice life. We only live for a few decades, so I want to do something that has a meaning for society.

When I'd been doing this for about five or six years, I got very severely depressed. I really didn't know how to go on, because I was under a huge amount of pressure. As director of the society I came in contact with the least privileged people in society every day, with people whose lives were incredibly difficult. I suffered alongside them every day. I experienced their emotional and psychological pain. At the time I had no idea that I should find a therapist. Nobody in China believed in psychological counseling at that time ....

But I got myself back on my feet, and now I think that I can face anything; I can cope with any pressure, even other people's lack of understanding of me, people's misunderstanding, or attacks on me; I can survive it all. A lot of people have remarked on how well I seem in the past few days [since the withdrawal of support by Beijing University for the Women's Law Center]. I'm still pretty happy, and full of smiles. I say, what is this difficulty compared with all the other problems I have run into? It's hardly a difficulty at all.

When I was in Guangdong [on a case involving] the local township government, I was nearly hauled off to jail by the police. They'd already got the handcuffs on me. I had gone down there to fight for some compensation money for the rural women who had lost their land. They sent a bunch of guys with sticks and I nearly got beaten up by them. I know about these things.

I've had severe depression and anxiety. I've had it all ... The 15 years I have spent as a legal aid lawyer, with all the challenges and ... the tough environment has made me tough ... I'm not going to fall to the ground weakly in the face of a few difficulties ... It has turned me from an ordinary weak woman into a strong and capable career woman. This is a very precious gift in my life.

I was the first legal aid lawyer in China. I have worked in government departments and as a journalist ... But I think that the past 15 years have been the happiest in my life. They were also the most tiring, and the hardest, and the riskiest years of my life. But they were the years where I felt most satisfied with myself and with my contribution [to society]. During that time I became a mature, strong, and professional woman with a very broad outlook.