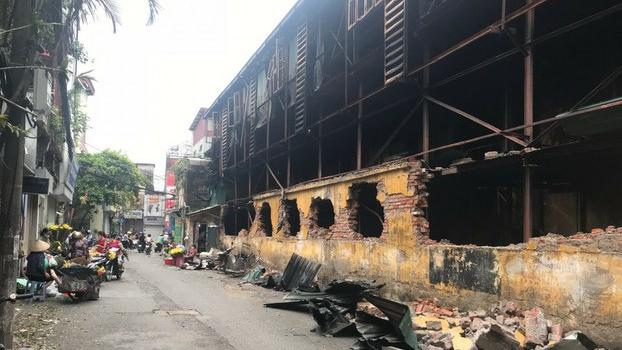 A building destroyed in the August 28, 2019 fire at Rang Dong Company's light bulb factory in Hanoi.
Courtesy of baotainguyenmoitruong.vn

A Vietnamese light bulb maker admitted to using liquid mercury, a danger to human health at high temperatures, and its director issued a public apology after fire destroyed a Hanoi factory that released the toxic metal that forced hundreds of people to evacuate schools and homes.

According to local Vietnamese media on September 8, the admission came during a meeting between a representative of the Rang Dong Light Bulb Company and the General Department of Environment on August 31, just one day after the company Company told local media it had stopped using liquid mercury in favor of safer mercury-zinc-bismuth amalgam in 2016.

Mercury vaporizes at a temperature of 674 degrees Fahrenheit (356 degrees Celsius). In vapor form, it can dissolve into the air and disperse in harmful concentrations, according to an expert quoted by the Lao Dong Online Newspaper days after the fire.

Rang Dong told the environment department that it used liquid mercury in the amount of 20 mg per bulb for some 480,000 fluorescent light bulbs, along with amalgam in 1.6 million compact bulbs, as well as other toxic chemicals.

Shortly after the fire in Hanoi’s Ha Dinh ward, the ward’s People’s Committee issued a notice saying that the people should not consume vegetables and fruit, poultry, fish or pigs raised within one kilometer of the factory for a period of 21 days. The notice also advised residents not to use local water sources in the same area.

Authorities also recommended evacuating young children, the elderly and the sick from the area for a period of one to 10 days, while advising people exhibiting signs of abnormalities to go to healthcare facilities for examination.

This statement was withdrawn by August 30, and the People’s Committee of Thanh Xuan district, a higher authority than Ha Dinh ward, said the statement was groundless and that the ward was not authorized to issue the warning, adding that specialized agencies arrived at the scene of the fire to check environmental safety, conduct surveys, and take soil, water, and air samples at the site.

On September 4, the Ministry of Natural Resources and Environment announced that the samples indicated that between 15.1 kg and 27.2 kg of mercury was leaked into the environment and confirmed that at some point in time after the fire, air monitors on the premises registered mercury concentrations exceeding levels recommended by the World Health Organization (WHO).

The letter also apologized to citizens living near the site and firefighters who responded to the disaster.

No official statistics have been released on the number of people affected by the fire.

News reports on Monday indicated that about 300 students at Ha Dinh Primary School were given a parental leave of absence due to fears of mercury contamination. The Thanh Xuan District Education & Training Division admitted that 320 students out of the school’s total 1,300 missed school, of which more than 220 lived 500 meters from the Rang Dong factory area.

It was also reported Monday that the Capital Command coordinated with the Chemical Command and the Ministry of Defense to collect more than 20 environmental samples in the burnt area, the factory’s sewage lines and Hanoi’s To Lich river. These samples were taken to assess current levels of pollution to formulate an appropriate plan to eliminate possible threats to the environment.