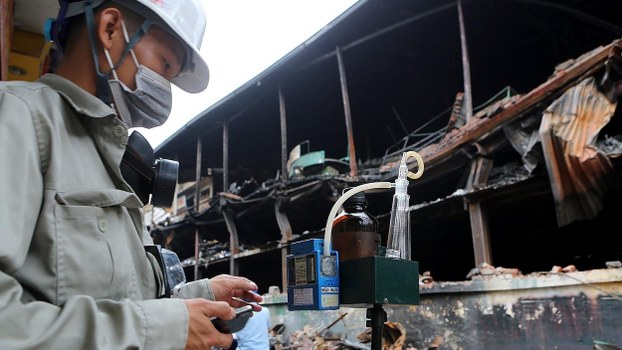 This photo taken and released by Vietnam News Agency on August 30, 2019 shows a Hanoi Natural Resources and Environment Monitoring official checking for a potential risk of toxin poisoning following a fire at a light bulb factory in Thanh Xuan district of Hanoi.

A fire at a lightbulb factory in Hanoi, Vietnam has caused considerable damage to the local environment, prompting the local government to advise against drinking water or eating foods produced close to the plant.

The fire started at about 6:30 P.M. August 28 in the Rang Dong factory, located in the city’s Ha Dinh ward and took about six hours to extinguish.

About 6,000 square meters of facilities at the site were destroyed, with damages reaching as much as $6.45 million

Following the disaster, the ward’s People’s Committee issued a notice saying that the people should not consume vegetables and fruit, poultry, fish or pigs raised within one kilometer of the factory for a period of 21 days. The notice also advised residents not to use local water sources in the same area.

Authorities also recommended evacuating young children, the elderly and the sick from the area for a period of one to 10 days, while advising people exhibiting signs of abnormalities to go to healthcare facilities for examination.

However, by August 30, the ward had withdrawn the statement. The People’s Committee of Thanh Xuan district, a higher authority than Ha Dinh ward, said the statement was groundless and that the ward was not authorized to issue the warning.

A local scientific expert, however, disagreed with the district.

Associate Professor Tran Hong Con of Hanoi National University was quoted by the Lao Dong Online Newspaper on August 30 as saying that the notice was appropriate, with the explanation that the mercury and fluorescent powder used to produce incandescent light bulbs would, at high temperatures become a vapor which could dissolve into the air and disperse in high concentrations that are harmful to human health.

Bich Phuong, a Hanoi local resident, told RFA’s Vietnamese Service on August 30 that she was very concerned that the announcement had been hastily issued and then hastily withdrawn.

"The people are in charge of management do not understand science, so first they should let the scientists speak, then based on their analysis, they should issue a timely warning,” she said.

“What were the original recommendations based on? What is the reason they withdrew it [so quickly]?” she asked, adding, “They can’t just say the impact will last for only a short time. There must be studies, investigations and assessments from the scientists.”

On the same day, VnExpress, quoted Dr. Hoang Duong Tung, former Deputy General Director of Environment and current President of the Vietnam Clean Air Network, as saying he was "very surprised" at the decision to withdraw the advisory.

But later in the day, Dr. Nguyen Van Khai, a scientist, reaffirmed to RFA that withdrawing the warning was the right decision:

“I applaud the Thanh Xuan District People's Committee for revoking the warning. Because it was an unscientific notice,” said Nguyen.

“Why should children and old people be evacuated for 1 to 10 days? From the burnt factory, the poison smoke will follow the wind, so why is [the affected area] only within 1 km?”

The People's Committee of Thanh Xuan District said many specialized agencies in the morning of August 30 arrived at the scene of the fire to check environmental safety, conduct surveys, and take soil, water, and air samples at the site.

Thanh Nien Online reported that an analysis that afternoon showed that microclimate, temperature and dust around the site were at normal levels and indicators of mercury, lead, and heavy metals were within the safety threshold for people.

Samples collected at the site will reportedly be tested in the laboratory of the Institute of Occupational Health and Environment and the results will be sent to Hanoi Department of Health and Thanh Xuan District People's Committee when complete.

The Rang Dong Company told local media on the same day that they had stopped using liquid mercury in lightbulb production in 2016, and the amalgam they were currently using has no effect on human health.

But Dr. Nguyen, despite saying that the withdrawal of the advisory was a wise decision urged Hanoi’s government to take quick measures to prevent the toxic effects of burning plastic and to ensure that water in the area was safe to drink.

“[The] government must act quickly to [determine the toxicity of] the air and groundwater. Most importantly, the water supply at the company's factory must be shut down,” the scientist said.

“All heavy metals [should be] deposited in a pit that must be blocked so as not to flow into ditches, pipes and groundwater,” Dr. Nguyen said.

Nguyen said the government should also make sure the water is safe and that all the burnt plastic at the plant should be properly disposed of.

Dr. Le Huy Ba, former director of the Institute of Science, Technology and Environmental Management, told Zing.vn Online that in the aftermath of the fire, Rang Dong needs to be responsible for identifying the toxins in the soil, water and air.

Le also said Rang Dong should also measure the level of radiation in the air and immediately notify the authorities of their findings for public health and safety.