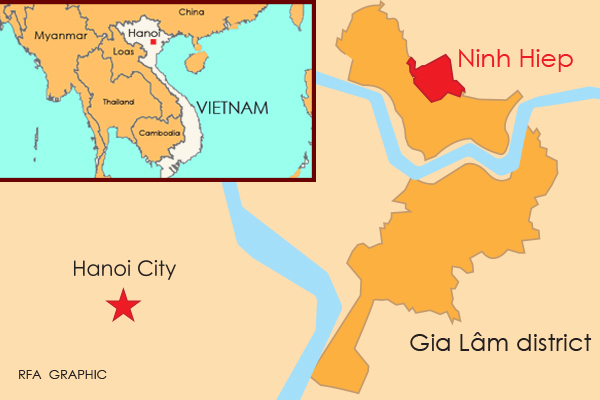 More than 2,500 Vietnamese elementary and middle school students in a Hanoi suburb have refused to go to class this week to protest against the local government’s decision to build a commercial center on the premises of their schools and near a local market.

Some students from three schools in Ninh Hiep commune in the Gia Lam district of Hanoi have returned to their classrooms, but many others have continued the protest they started on Monday, raising concerns among Hanoi education authorities about their right to go to school.

The protest began at 9 a.m. on Monday when hundreds of residents and students beat drums and held banners outside schools to protest against the trade center project, according to a report in the official Thanh Nien Daily newspaper.

State media reported that the students did not go to school because their parents, who are local merchants, forced them to protest to pressure the local government not to build the project on the market’s parking lot.

The roughly 1,400 merchants who work in the market say they will lose business if their customers do not have a place to park their motorcycles and other vehicles.

Gia Lam’s People Committee told the reporters that Hanoi city administrators had issued a decision to let investors clear about 4,900 square meters (52,740 square feet) of the market area on Tuesday, according to state media, but they had to stop their work to wait for residents’ consent.

In the beginning, only merchants who work at the local market protested, but then they kept their children home from school, said a Ninh Hiep resident, who declined to be named.

“The students did not go to school because the parking area [on the parcel of land near the market] had been sold,” the resident told RFA. “They [authorities] are going to sell the schools’ land too.”

After the article was posted online, blogger Hoang Dung asked one of the writers of the article, Tue Nguyen, to verify the information that the students had received money to protest, but Nguyen refused to do so.

“She said she didn’t know anything about that detail even though she was one of the three authors of the article,” Dung told RFA’s Vietnamese Service. “The state media is not writing much about the Ninh Hiep incident because it involves young students who have taken to the streets to protect their own families’ rights, and they are worried this will spread elsewhere. State media is worried this news will be all over the internet.”

As of Wednesday, nearly 870 of 1,646 elementary school students had returned to their classrooms, while 300 of 940 middle school students went back to school, according to Tuoi Tre Online, quoting Gia Lam’s education authority.

The incident is not the first time that residents of Ninh Hiep commune have allowed their children to stay at home to prevent local authorities from building the trade center, according to state media.