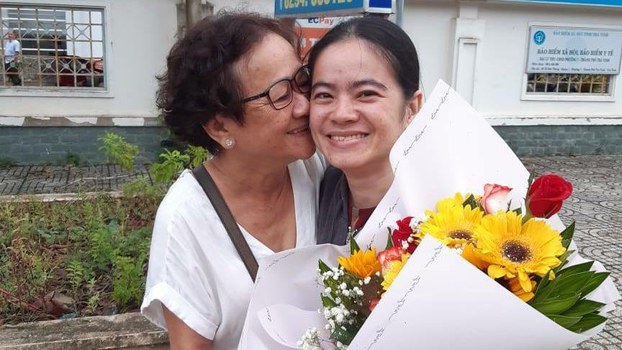 Authorities in Vietnam released an activist who had been one of the country’s longest serving political prisoners Friday, after she had endured eight years detention for documenting peaceful demonstrations.

According to a statement by local pro-democracy group Viet Tan, Nguyen Dang Minh Man was subjected to “arbitrary detention and harsh prison conditions” after she was arrested in a July 2011 crackdown on bloggers and citizen journalists.

After returning to her home in Tra Vinh province in the south of the country, Nguyen told RFA’s Vietnamese Service that she was happy to be out of prison.

“I’m grateful, after eight years in prison, to be able to reunite with my family, but due to my poor health and having to drive long-distance [from the prison in Than Hoa province to my home], I am very tired,” she said over the telephone.

“I feel the full love that everyone has had for me and I would like to thank everyone,” said Nguyen.

Authorities targeted her in 2011 because she became known for taking photos of graffiti and fliers emblazoned with the pro-Vietnamese slogan “HS.TS.VN” throughout the country.

It is a statement that reflects the Vietnamese government’s official position on the South China Sea islands, which were a flash point at the time as Beijing had been expanding its presence in waters near Vietnam.

Two years after her initial arrest, Nguyen was convicted with 13 others for “attempting to overthrow the state” under Article 79 of the Vietnamese Penal Code, and sentenced to eight years in prison and five years house arrest.

The prison conditions during her confinement were beyond harsh, and were widely documented. Reports of inedible food and restricted access to clean water circulated throughout local and international media.

While in prison Nguyen protested the treatment she and others had been receiving by going on several hunger strikes. Her family also claimed she had been physically attacked and placed in solitary confinement several times.

Her detention was ruled in violation of international law by the United Nations Working Group on Arbitrary Detention (UNWGAD), which called for her immediate release in 2013.

Do Hoang Diem, Chairman of Viet Tan stated: “We thank human rights organizations and the international community for the continued advocacy for Nguyen Dang Minh Man. She should never have been jailed in the first place and her house arrest must be repealed immediately.”

In the statement, Viet Tan said that two of the 13 she was convicted alongside remain in prison, while one was released but was detained again in 2019.

The statement also said that in the past two years “dozens” of bloggers and citizen journalists have been detained in Vietnam, and are subject to horrible conditions in jail. It cited how prisoners of conscience in Nghe An province’s Camp 6 have gone on hunger strikes to protest.

Nguyen Kim Binh of the Vietnam Human Rights Network said in December however that the one-party communist state is currently detaining more than 200 political prisoners.

Welcome home and may you find happiness along with normalcy!
Our work is never done as long as communism continues to rule.
It's a long struggle but we'll fight a good fight.

Will the US ever speak up for the Khmer Krom in Vietnam? How about the Chams? What about the Degars? Why does the US continue down the silly path of supporting an inferior option when over 14 million Khmer Krom are repressed? Khmer Kroms,Chams, and Degars represent millions that Vietnam persecute but the US wants to focus on less than 200 people? What a silly game the US wants to play.