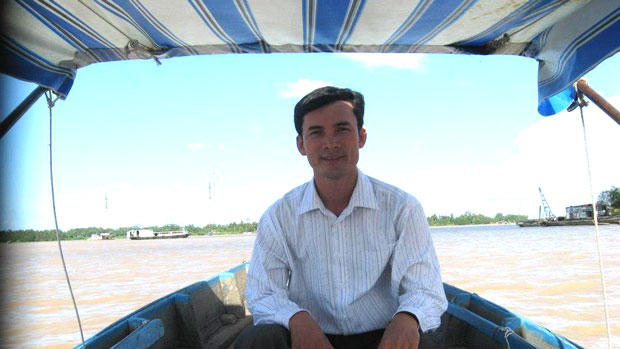 U.S. lawmakers called in a letter on Tuesday for a stronger push by the United States to demand that Vietnam uphold the right to freedom of expression in the wake of the jailing of bloggers and activists in the one-party communist state.

Writing to U.S. Secretary of State Mike Pompeo, 25 members of Congress led by Senator Edward Markey (D-Mass.) and Representative Alan Lowenthal (CA-47), pointed to what they called  “troubling cases of arrests and detentions of independent journalists” in Vietnam.

Cases detailed in the letter include that of RFA blogger and videographer Nguyen Van Hoa, now serving a seven-year term for conducting “propaganda” against the state, and of Voice of America contributor Le Anh Hung, now awaiting trial on a charge of “abusing democratic freedoms.”

Also mentioned in the letter is the case of Truong Duy Nhat, an RFA contributor abducted in Bangkok, Thailand, a day after applying for refugee status and now believed held at a Ministry of Public Security detention center in Vietnam’s capital Hanoi.

“Vietnam is a signatory to the International Covenant on Civil and Political Rights and as such has committed to respecting individual freedoms of belief, speech, association, press, and the right to uphold assembly and political expression,” the lawmakers wrote in their letter.

“The United States has an obligation to both raise these egregious human and political rights violations with its Vietnamese counterparts and take steps to shape the behavior of the Communist Party of Vietnam.”

Authorities in north-central Vietnam’s Nghe An province meanwhile arrested Catholic schoolteacher Nguyen Nang Tinh on unknown charges on Wednesday, taking him into custody while he was having breakfast with his son, Tinh’s wife told RFA’s Vietnamese Service.

“Around 10:00 in the morning I heard that he had been arrested, so I tried to contact him and several of his friends, but I couldn’t get through,” Nguyen Thi Tinh told RFA by telephone.

“Later, my father called and said that provincial police had called to tell him to come pick up our children at the commune committee offices,” Tinh said, adding that when one of their sons had cried when police put him and his father into a police car to be taken away, he was told “Your father has committed a crime.”

Family members have so far been barred from visiting Tinh, who was active in community work and in projects related to culture and art in Nghe An’s Vinh diocese, and no warrants for his arrest have yet been shown, Tinh’s wife said.

Though comments on social media on Wednesday described Tinh as a member of Viet Tan, a U.S.-based Vietnamese opposition party called a “terrorist organization” by Vietnamese authorities, Tinh’s wife said her husband was only interested in helping others as long as what he was doing was permitted by Vietnam’s laws.

“Anyway, what is wrong with Viet Tan?” Tinh’s wife asked.

“Are they really doing anything bad? I have no idea. All I know is that my husband hasn’t done anything wrong.”

On Aug. 16, 2018, A court in Nghe An province convicted another member of Vinh diocese, a dissident writer and activist, of trying to overthrow the country’s communist government, handing him a 20-year prison term after a one-day trial in which witnesses who might have cleared him were blocked from appearing.

Le Dinh Luong, 53, a Catholic, was taken into custody on July 24, 2017, and accused by authorities of membership in Viet Tan and of calling for a boycott of parliamentary elections in 2016.

“The Vietnamese authorities portray individuals who are peacefully exercising their human rights as criminals,” Amnesty International (AI) said in its report, Prisoners of Conscience in Vietnam.

“However, it is the government that flagrantly contravenes international human rights law and its own constitution,” AI said.

Don't forget to also include autonomy for the Khmers and Chams.