US Citizen Held in Vietnam Given 12-Year Prison Sentence 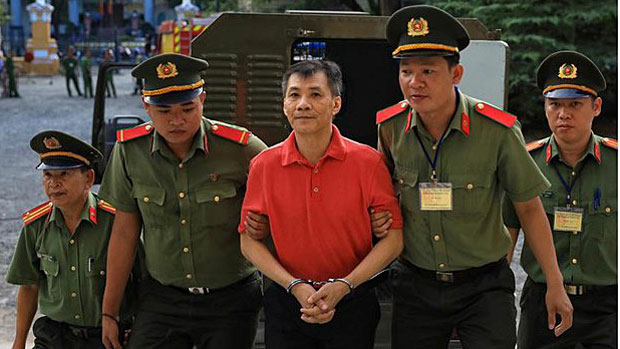 A Vietnamese court on Monday sentenced U.S. citizen Michael Nguyen to 12 years in prison following his conviction in a half-day trial of activities “aimed at overthrowing the state,” media and other sources said.

Nguyen, who had been held without access to lawyers after disappearing on July 6, 2018 while visiting friends and relatives in Vietnam, will be deported after his sentence has been served, sources said.

Two other men, Huynh Duc Thanh Binh and Tran Long Phi, were convicted by the court in Ho Chi Minh City on the same charge and handed prison terms of 10 years and eight years, respectively.

Prosecutors also charged Nguyen and his codefendants with preparing political leaflets, gasoline bombs, and slingshots to use in attacking police forces during the protests, defense lawyer Nguyen Van Mieng told RFA’s Vietnamese Service after the trial.

Speaking to RFA, Mieng—the attorney for Huynh Duc Thanh Binh—described the sentences handed down as “harsh but not uncommon” in cases involving organized political opposition to Vietnam’s one-party, communist state.

“The leader [in these cases] will usually get 15 years, while those who carry out their orders will often get less than 12 years,” Mieng said, adding that because the court viewed Nguyen as a collaborator of the group, he had been given a 12-year term.

“According to what I said in court, though, this whole case was a sham,” Mieng said.

“These men were set up by accusing them of involvement in a group they had never even heard of.”

The U.S. Embassy in Vietnam on Monday said it was disappointed in the sentence given to Nguyen, a married 55-year-old resident of California with four school-age children at home.

“We are disappointed by today’s verdict,” an embassy spokeswoman said in a statement emailed to Reuters news agency. “We will continue to raise our concerns regarding Mr. Nguyen’s case, and his welfare, at all appropriate levels.”

Vietnam has been controlled by the hooligans