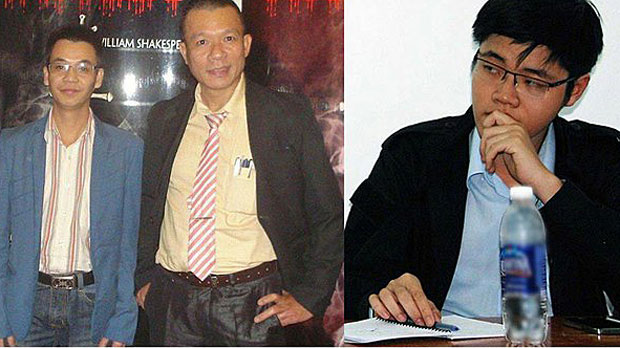 Vu Quang Thuan, 51, Nguyen Van Dien, 35, and Tran Hoang Phuc, 23, were found guilty of “spreading propaganda against the state” under Article 88 of the country’s penal code and handed sentences of eight years, six and a half years, and four years in prison, respectively.

Additional terms of from four to five years of house arrest were also imposed, to be served following their release.

The three defendants and their seven-member defense team asked the judge to allow the videos to be shown in court, Son said.

“But our request was rejected on the excuse that the courtroom lacked the facilities [to show the videos],” Son said, adding that Thuan then offered to pay for the cost of screens and computers so that the clips could be shown.

The evidence given at trial was never evaluated by the court, and the judge finally ruled based only on the conclusions of Vietnam’s Ministry of Information and Communication that the videos contained proof of anti-state activity, Son said.

“I said at the trial that the evidence being presented did not give legal grounds under Vietnamese law for the defendants to be prosecuted, but in the end they were still convicted,” he said.

“I think that the sentences given to them are completely wrong and unfair,” he said.

Relatives of the accused were not allowed to attend the trial, and activists said that security forces including plainclothes and uniformed police had guarded their homes for days before the trial to prevent them from traveling to show support.

“I was just sitting on the street because I was not allowed to enter the courtroom,” Dien’s father Nguyen Van told RFA after the trial.

“The sentence of six years and six months is too harsh for what Dien did,” he said.

Authorities have been targeting activist writers and bloggers in a months-long crackdown in one-party Communist Vietnam, where dissident is not tolerated.

Vietnam currently holds at least 84 prisoners of conscience, the highest number in any country in Southeast Asia, according to rights group Amnesty International.

Once again, please consider the followings. They are:
1/Would you goons like the court to render the verdict by your accusers only or by a randomly selected jurors of your peers?
I’d bet that you'd prefer to have the juror for it’s the most fair way to have your case reviewed.
2/Would you goons like to have all your documents; exhibits; to be shown and reviewed by the court or not?
You’d be extremely stupid to answer NO here!
3/Would you like to have a trail lawyer(s) to represent your case in the court or not?
I’d think that you would like to have a representative who is versed in laws to help you with these mucky procedures.
If you goons agree with all of the aforementioned then you must realize that the proceedings and treatments of the cases in the article are injustice and plain wrong!
So, what do your parents and the ‘fabulous’ Ho teach you whenever you see something wrong?
Be honest now!