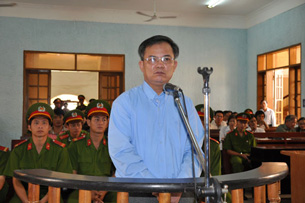 An appeals court in Vietnam upheld an 11-year jail sentence imposed on a pastor of a banned church for “undermining unity” in the one-party state ahead of a trial next week of a group of bloggers on similar charges of criticizing the government.

Mennonite clergyman and prominent activist Nguyen Cong Chinh, 43, had appealed his sentence after he was found guilty in March of having ties with antigovernment groups and writing and distributing material that the authorities said slandered them.

But after a half-day hearing on Tuesday, the judge at the appeals court in central Vietnam’s Gia Lai province said there was no new evidence that would allow for a reduction in his sentence.

Chinh, detained since April 2010, has complained for nearly a decade of harassment by Gia Lai and Kontum provincial authorities and of a ban on preaching in the Central Highlands.

Earlier this month, Chinh was named as an accomplice to Phan Ngoc Tuan, 53, who was sentenced to five years in jail by a Ninh Thuan court for “slandering the state” by distributing leaflets accusing the authorities of suppressing religion, according to the Vietnam News daily.

Vietnam's constitution guarantees freedom of belief and religion, but religious activity is closely monitored and remains under state control.

The court’s ruling on Chinh came as three bloggers prepare to stand trial for “conducting propaganda against the state” through articles they posted online.

In a case that has drawn international attention, Nguyen Van Hai (also known as Dieu Cay), Phan Thanh Hai, and Ta Phong Tan are due for a court hearing in Ho Chi Minh City on Aug. 7.

On Monday, Tan’s mother died after staging a rare self-immolation protest against her daughter’s imprisonment.

The three stand accused of “distorting the truth” and “denigrating the party and state” for politically critical blogging and for posting hundreds of articles on their banned website known as the Free Journalists Club.

They face a maximum of 20 years in prison under Article 88 of Vietnam’s criminal code, which prohibits “propaganda against the state.”

The bloggers’ court hearing had been originally scheduled for March 15, but the day before, their lawyers were abruptly informed it would be postponed indefinitely.

On Tuesday, international rights groups the Observatory for the Protection of Human Rights Defender—a branch of the International Federation for Human Rights—and the Vietnam Committee on Human Rights warned that the hearing would be closed.

“It appears thus that a guilty verdict has already been decided in advance,” the groups said in a joint letter to Hanoi-based foreign diplomatic missions, urging them to send their staff to monitor the hearing.

“The judicial action against the three bloggers is merely aimed at punishing the peaceful exercise of their right to freedom of expression,” they said.