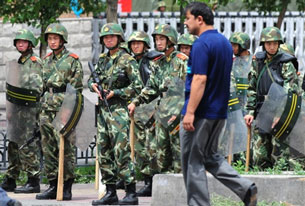 HONG KONG—Witnesses to deadly ethnic violence between minority Uyghurs and majority Han Chinese in the Xinjiang Uyghur Autonomous Region (XUAR) of northwest China have described brutality on both sides of the conflict.

A Uyghur shop owner said that on July 5 he saw thousands of young Uyghurs in the streets around People's Square at the heart of the regional capital, Urumqi, who had come out to demand an inquiry into the deaths of Uyghur migrant workers at the hands of a Han Chinese mob at a factory in southern China.

"The first time I saw them was on People's Square. I heard they had gone there to request a meeting with officials and a reply on the [Shaoguan] toy factory incident, and that the officials didn't come out," he said.

"The police starting detaining people, and after that happened the Uyghurs went to Nanmen district."

"At the beginning there wasn't any fighting. More than 1,000 people went to Shanxi Alley to protest," he said, referring to an area of downtown Urumqi.

Another Uyghur, who was in the vicinity of Urumqi's Grand Bazaar, said that just past 8 p.m. he saw clashes between Han Chinese and Uyghurs near the Baojian Hospital. After that, he saw a mob of more than 20 Uyghurs attack any Han Chinese they saw.

"I went over to the Rebiya Trade Building. The Uyghurs were fighting the paramilitary police. I came back to Eryuan [the No.2 Hospital], and I saw more than 20 young Uyghur men. They attacked any Han Chinese they saw and injured them," he said.

He said that after 9 p.m. he began to hear gunshots near the Grand Bazaar.

He added that he saw a Uyghur mob beat a Han woman and he tried to stop them, saying they shouldn't attack women. He later saved a Han man and his mother and took them to hospital.

"I think more than 500 people died, Han and Uyghur together."

Uyghurs visiting Urumqi on business from neighboring Kazakhstan said they were trapped in their hotel, also near the Rebiya Trade Building.

"There [were] about 3,000 to 4,000 Chinese people moving around as a mob, breaking in around the Hualin district and saying that they would kill all the Uyghurs in Urumqi," he said.

"They were moving around with sticks and knives, but the police did not stop them."

The three businesspeople, two men and one woman who had stayed in the same hotel together, said they saw heavy violence against Uyghurs in their part of town.

"The number of dead Uyghurs right in front of my hotel building was around 150 to 200," the first Uyghur businessman said.

A businesswoman traveling with him said that none of the violence against Uyghurs was described by official media.

"I heard men and women shouting and crying. I looked outside and saw that the Chinese police were chasing people. They were running, and girls were screaming," she said.

"It was so chaotic, and I got scared ... They were beating and kicking the young men and detaining them ... Girls were running away, crying and screaming. I did not know what to do. I just watched. So much blood was shed."

"Towards the evening, there was a blackout, and then the shooting started," she said.

A second businessman in the group added: "We saw Han Chinese citizens carrying metal bars and axes, chasing, beating, and killing Uyghurs wherever they saw them."

Beijing has blamed the ethnic strife in the region on Washington-based Uyghur dissident Rebiya Kadeer, who said the rioting in Urumqi was sparked after a peaceful protest demanding an investigation into the deaths of Uyghur migrant workers at a toy factory in southern China was suppressed violently by police.

Uyghurs say they have long suffered ethnic discrimination, religious controls, and continued poverty despite China's ambitious plans to develop the vast hinterland to the northwest.