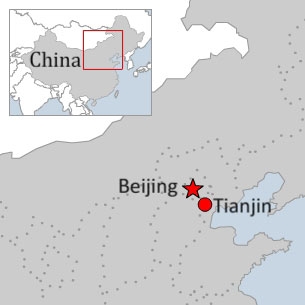 The restaurant was destroyed after a fight erupted between two groups of Han Chinese, who make up the majority of China's population, they said.

Witnesses who asked not to be named said that after the fight quieted down, the brawlers returned with some 30 more Han men and attacked the restaurant with stones from a nearby construction site.

“We have six workers in this restaurant and four were injured badly. Their heads were cracked and swollen,” a Uyghur restaurant employee said.

“The police told us they detained 14 of the attackers. They told us the damages will be compensated for and asked us to keep the restaurant open,” he said.

"Right now our restaurant is severely damaged. The chairs and tables, the refrigerator, the air conditioner, everything was smashed."

Police in the Zhongshanmen district of Tianjin, contacted by telephone, confirmed that a clash had occurred but declined to give details.

In January, a Uyghur waiter was stabbed to death in a brawl in a restaurant in Shenzhen, China's southeastern boomtown near the border with Hong Kong.

In June 2009, a clash between Uyghur and Han workers at a factory in Shaoguan, Guangdong, prompted rioting by the two ethnic groups in the Xinjiang Uyghur Autonomous Region (XUAR) capital.

Another Uyghur witness who described himself as a friend of the restaurant's owner said: “Around 10 p.m., a fight broke out between a group of Chinese railroad workers and two other Chinese people who had come to eat at the restaurant. The Uyghur restaurant workers separated them because it was disturbing their business.”

At that time, the restaurant workers called the Zhongshanmen police for help, but they did not respond immediately.

“Later on, these Chinese brought a lot of rocks and other bricks from a nearby construction site and threw them at the restaurant. The restaurant workers called the police [again] and begged them to save them, and then the police came to break up the fight,” he said.

"I think the police who dealt with the incident were not really fair. They told the injured Uyghurs, 'Just go to the doctor and have yourselves checked.' They also said that they questioned the attackers and asked the owner to keep the restaurant open, but they didn’t say how they are dealing with the incident. Most of the Uyghurs here are very angry about this incident."

Millions of Uyghurs—a distinct, Turkic minority who are predominantly Muslim—populate Central Asia and the XUAR in northwestern China.

Ethnic tensions between Uyghurs and majority Han Chinese settlers have simmered for years, erupting in July 2009 in rioting that left some 200 people dead, according to the Chinese government’s tally.

Original reporting by Mihriban for RFA’s Uyghur service. Translated from the Uyghur by Mamatjan Juma. Uyghur service director: Dolkun Kamberi. Written for the Web in English by Rachel Vandenbrink.