Lack of Ruling on Nature of Crimes in Xinjiang ‘a Shortcoming’ of Trump Administration: Adrian Zenz 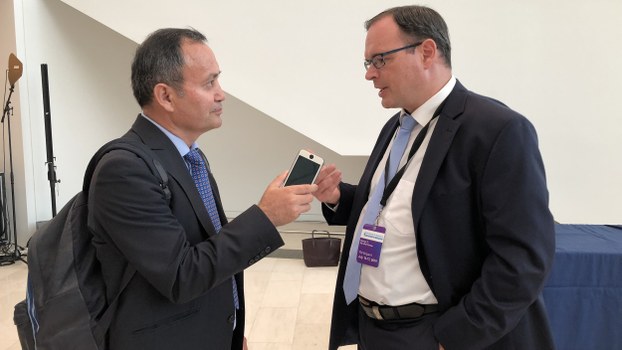 Adrian Zenz (R) speaks with RFA during an interview in Washington, July 17, 2019.

Adrian Zenz, a senior fellow in China Studies at the Washington-based Victims of Communism Memorial Foundation, has emerged as a leading expert on the mass incarceration of Uyghurs in internment camps in northwest China’s Xinjiang Uyghur Autonomous Region (XUAR). Last month, he published a report detailing a dramatic increase in recent years in the number of forced sterilizations and abortions targeting Uyghurs in region, which he concluded may amount to a government-led campaign of genocide according to the United Nations Convention on the Prevention and Punishment of the Crime of Genocide. Last week, Representative James P. McGovern (D-Mass.) and Senator Marco Rubio (R-Fla.), the chairman and cochairman of the U.S. Congressional-Executive Commission on China (CECC) sent a letter to Secretary of State Mike Pompeo and Treasury Secretary Steven Mnuchin urging them to respond to the report by condemning the population control policy and imposing sanctions on Chinese officials responsible.

Zenz recently spoke with RFA’s Uyghur Service director Alim Seytoff about the letter, which he said is part of a bid by the bipartisan group of lawmakers to pressure U.S. President Donald Trump’s administration to take a stronger stance on the situation in the XUAR, where authorities are believed to have held up to 1.8 million Uyghurs and other Muslim minorities in a vast network of internment camps since April 2017. While Trump last month signed legislation that provides for sanctions against Chinese officials deemed responsible for abuses in the region under the Global Magnitsky Human Rights Accountability Act, such measures have not yet been taken.

To call something genocide legally—there’s only one legal definition of genocide and that’s the United Nations Convention. And it is now, for the first time, that there is fairly conclusive evidence of one of the criteria of the convention—namely the prevention of births. So, the United Nations Genocide Convention definition is fairly narrow. It does not include things like cultural genocide, ethnocide, etcetera. I think it’s easier to make a determination for crimes against humanity because crimes against humanity do not require an atrocity to meet the exact definition of the U.N. Genocide Convention. But the [U.S.] Holocaust [Memorial] Museum [in Washington], they said earlier this year that China’s actions in Xinjiang may constitute crimes against humanity.

Reported by Jewlan for RFA’s Uyghur Service. Written in English by Joshua Lipes.