US Should ‘Immediately Enforce’ Sanctions on Chinese Officials For Abuses in Xinjiang: Religious Freedom Panel 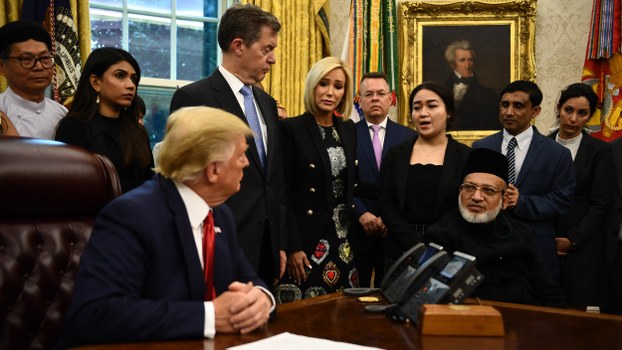 US President Donald Trump speaks with the daughter of jailed Uyghur scholar Ilham Tohti during a meeting with survivors of religious persecution in the Oval Office of the White House in Washington, July 17, 2019.

U.S. President Donald Trump should “immediately enforce” sanctions against Chinese officials responsible for rights abuses in northwest China’s Xinjiang Uyghur Autonomous Region (XUAR) as authorized by an act of Congress he signed into law this week, according to a panel on religious freedom.

On Wednesday, Trump enacted the Uyghur Human Rights Policy Act of 2020 (UHRPA), which passed nearly unanimously through both houses of Congress last month and highlights arbitrary incarceration, forced labor, and other abuses in the XUAR—home to internment camps holding as many as 1.8 million Uyghurs and other Muslims.

In addition to condemning the Chinese Communist Party (CCP) for the three-year-old internment camp program, the new law requires regular monitoring of the situation in the region by U.S. government bodies for the application of sanctions to top officials such as XUAR party chief Chen Quanguo. It also addresses Chinese government harassment of Uyghurs living inside the United States.

In a statement issued on Thursday, the U.S. Commission on International Religious Freedom (USCIRF) noted that the Trump administration has been “unambiguous in expressing both concern and outrage” over the treatment of Uyghurs and other ethnic minorities in China and called on the White House to turn its words into action.

“USCIRF urges the Administration to enforce the Act and issue immediate and targeted sanctions against Chinese government officials responsible for the persecution of Uyghurs,” it said.

Trump’s signing of the Uyghur Human Rights Policy Act into law drew applause from the Uyghur exile community and others who have championed the rights of the Uyghur people.

Washington-based Uyghur-American attorney Nury Turkel, who last month was appointed to USCIRF, noted that the new law “is the first bill in the history of the Uyghur people being put in place to protect their political, social, and religious rights.”

Beijing, which has previously warned of retaliation “in proportion” if Chen Quanguo were targeted as part of legislation in support of the Uyghurs, said that the UHRPA “stigmatized Xinjiang’s anti-terrorism, anti-secession, and deradicalization measures,” and warned of “consequences” to come.

The signing follows months of tense relations between the U.S. and China, with the Trump administration taking multiple jabs at Beijing for its lack of transparency in handling the coronavirus pandemic, trade policy, and expansive territorial claims.

U.S. Secretary of State Mike Pompeo held a seven-hour closed-door meeting with China’s foreign policy chief, Yang Jiechi, in Hawaii on Wednesday, marking the first high-level meeting between the two countries since the beginning of the outbreak.

It also came on the same day that the Washington Post published an excerpt from a forthcoming memoir by former national security adviser John Bolton which claimed that Trump told Chinese President Xi Jinping he approved of China’s construction of its camp network amidst negotiations on a trade agreement.

According to Bolton, Trump even “pleaded” with Xi to help ensure he was re-elected in 2020.

Trump later told the Wall Street Journal that signing the UHRPA proved that he would not back down to China and called Bolton a “liar.”

In the unlikely event that Trump had vetoed the act, Congress could have overridden him because of the near unanimous support it received in both the House and the Senate.

Under the UHRPA, Chinese officials such as Chen deemed responsible for persecution in the XUAR could see their assets in the U.S. frozen and be subjected to visa restrictions under the Global Magnitsky Human Rights Accountability Act, crafted initially to deal with rights abuses in Russia.

However, the act provides significant leeway for Trump to withhold sanctions if he believes doing so would run counter to U.S. interests. His administration already has the ability to sanction Chinese officials over rights abuses and has chosen not to do so, amidst fears that it could derail the implementation of a long-stalled U.S.-China trade deal.

While Trump on Wednesday praised the new law for its ability to “[hold] accountable perpetrators of human rights violations and abuses” in the XUAR, he also noted in a statement after the signing that it “purports to limit my discretion to terminate inadmissibility sanctions.”

The president said such limitations could be inconsistent with his constitutional authorities to receive foreign officials as diplomatic representatives, and therefore would consider the relevant section “advisory and non-binding.” He pledged to make efforts to notify relevant congressional committees before removing inadmissibility sanctions against any officials targeted by the new law.

Last month, Sophie Richardson, the China director at New York-based Human Rights Watch, told the online journal Foreign Policy that the UHRPA is the first piece of legislation to explicitly recognize rights abuses in the XUAR and set out U.S. policy responses to them.

“A lot depends on how enthusiastically this is enforced,” she noted.

When asked by RFA’s Uyghur Service Friday about the likelihood that the administration would take measures against officials such as Chen under the new legislation, Morgan Ortagus, spokesperson for the U.S. State Department, responded, “We do not comment on sanctions.”

“We are working hard to encourage the PRC (People’s Republic of China) government to cease its human rights abuses in Xinjiang, and we are constantly evaluating various measures to do so,” she said.

A senior administration official told RFA Friday that Trump “has a strong, action-oriented record of holding the Chinese government accountable for its atrocities in Xinjiang,” citing restrictions on visas and exports he imposed last year on Chinese entities complicit in the abuses.

“We call on the Chinese government to release the millions of Uyghurs and other minorities arbitrarily detained in their 21st century indoctrination camps and immediately end its forced labor practices for ‘Made in China’ goods being exported around the world.”

Congress may also soon deliberate new legislation which would prohibit imports from the XUAR to the U.S. amid growing evidence that internment camps in the region have increasingly transitioned from political indoctrination to forced labor, with detainees being sent to work in cotton and textile factories.

The Uyghur Forced Labor Prevention Act, introduced in March, would block imports from the region unless proof can be shown that they are not linked to forced labor.