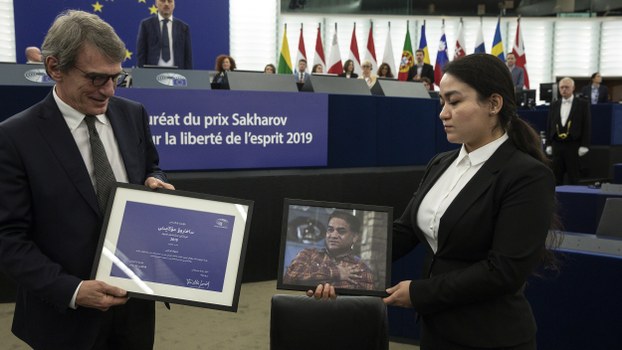 The daughter of jailed Uyghur scholar Ilham Tohti accepted the European Parliament’s 2019 Sakharov Prize for Freedom of Thought on his behalf on Wednesday, calling on lawmakers to protest China’s policies in the Xinjiang Uyghur Autonomous Region (XUAR).

Tohti, a former professor of economics at the Central University for Nationalities in Beijing, was sentenced to life in prison for “separatism” by the Urumqi Intermediate People's Court in the XUAR on Sept. 23, 2014, despite having worked for more than two decades to foster dialogue and understanding between Uyghurs and Han Chinese.

The European Parliament said in October it had selected Tohti, 49, for the Sakharov Prize—its top human rights award—for “fighting for the rights of China’s Uyghur minority” in the XUAR, where authorities are believed to have detained some 1.8 million Uyghurs and other Muslim minorities accused of harboring “strong religious views” and “politically incorrect” ideas in a vast network of internment camps since April 2017.

In accepting the Sakharov Prize on Wednesday at a ceremony in Strasbourg, France, Tohti’s daughter, Jewher Ilham, urged the international community to speak out about China’s treatment of Uyghurs and its policy of mass incarceration in the XUAR.

“To the members of parliament, use your laws to hold Chinese government officials accountable; to businesses, don't be complacent in the Chinese government's persecution of the Uyghur people; to the scholars, continue your research to help expose these atrocities,” she said.

“This is not about fighting China, this is about protecting human rights.”

European Parliament president David Sassoli said that in awarding the prize, “we strongly urge the Chinese government to release Tohti and we call for the respect of minority rights in China.”

Speaking to RFA's Uyghur Service later on Wednesday, Ilham said called on the European Parliament to "keep the attention high, not only on my father but also on the Uyghur issue."

"Many proposals have been discussed with the members of the European Parliament in these intense days, and I am confident that they will work hard to implement them," she added.

Tohti has endured mistreatment in prison and has only been granted limited visits by family members. Ilham told RFA’s Uyghur Service in September that she hadn’t heard anything about Tohti since 2017, and was unsure of his condition or even if he is still alive—claims she repeated on Wednesday.

After he was awarded the Sakharov Prize in October, China called Tohti a “criminal” and called on the international community to respect its internal affairs and judicial sovereignty, “and not inflate the arrogance of terrorists.”

In a statement on Wednesday, the Munich-based World Uyghur Congress (WUC) exile group welcomed the European Parliament’s selection of Tohti for the award, which is given to “exceptional individuals and organisations defending human rights and fundamental freedoms,” and includes a prize of 50,000 euros (U.S. $55,500), calling it “a symbolically important act of support for the Uyghur people.”

“This is a huge victory for the Uyghur community and we are grateful to the European Parliament for awarding Ilham Tohti the Sakharov Prize,” said WUC president Dolkun Isa.

“His life and ideals are an inspiration to the Uyghur people. His treatment was a precursor to the crimes against humanity that the Chinese government have been subjecting the Uyghur people since then.”

The WUC urged the Chinese government to “immediately release” Tohti, as well as all those “held in arbitrary detention in China,” and called on Beijing to “listen to [his] words and message … and to the voices of the Uyghur people demanding human rights.”

Also in October, the Parliamentary Assembly of the Council of Europe (PACE) awarded Tohti the 2019 Vaclav Havel Human Rights Prize, named after the Czech playwright and politician who opposed Soviet communism, making him the first dissident from China to receive the prize.

In addition to winning the Sakharov Prize and the Vaclav Havel prize, Tohti was awarded the 2014 PEN/Barbara Goldsmith Freedom to Write Award, the Martin Ennals Award in 2016, the Liberal International Prize for Freedom in 2017, and Freedom House’s Freedom Award in 2019. The jailed professor is also a nominee for the 2019 Nobel Peace Prize.

Wednesday’s award ceremony came as China has faced increasing scrutiny from the international community over rights abuses against Uyghurs in the XUAR.

Beijing on Monday slammed star soccer forward Mesut Ozil of the English Premier League’s Arsenal club—a German-born Turkish Muslim—for his “blinded and misled” comments over the weekend in which he called Uyghurs “warriors who resist persecution” in the XUAR and also chastised members of his faith for not speaking out against China.

While Arsenal has distanced itself from Ozil’s statement, former Arsenal manager Arsene Wenger on Wednesday defended the player, telling reporters in Doha that “he has the right” to express his opinion on the issue.

U.S. Secretary of State Mike Pompeo also weighed in on Ozil’s comments, tweeting on Tuesday that while the ruling Chinese Communist Party (CCP) can censor the player and Arsenal’s games, “the truth will prevail.”

“The CCP can’t hide its gross #HumanRights violations perpetrated against Uighurs and other religious faiths from the world,” he said.

The British government said in response to China’s treatment of Arsenal that it “consistently stands up for freedom of speech and expression and we urge other countries to do the same,” adding that it has “serious concerns about the human rights situation in Xinjiang.”

Earlier this month, a group of 10 U.S. lawmakers called on the International Olympic Committee (IOC) to speed up implementation of an agenda requiring host cities to adhere to rights protections ahead of Beijing’s Winter Games in 2022, citing reports of widespread abuses in the XUAR.

A group of primarily Uyghur activists have launched a campaign called No Rights. No Games. The stated goal of the campaign is to make China “respect Uyghur rights and close their internment camp system before the Beijing 2022 Olympic Games.”

In a report earlier this week, VICE.com quoted Peter Irwin, the primary coordinator of the campaign, as saying, “If you have a games that is hosted in a country with concentration camps—and I'll use that language—that completely does not square with the very clear spirit of the games and the Olympic movement.”

In a statement to VICE, the IOC accepted responsibility “for ensuring the respect of the Olympic Charter with regard to the Olympic Games and take this responsibility very seriously,” but acknowledged that it has “neither the mandate nor the capability to change the laws or the political system of a sovereign country.”

Earlier this month, the Democratic Party-controlled U.S. House of Representatives nearly unanimously passed the Uyghur Human Rights Policy Act, which will require U.S. President Donald Trump to condemn Chinese abuses in Xinjiang and call for the closure of mass detention camps once it is signed into law.

The legislation, which passed the Senate in September, calls for sanctions on XUAR Communist Party Secretary Chen Quanguo, seen as the architect of the mass internment policy.  An amended version of the bill still has to be approved by the Senate before being sent to Trump.