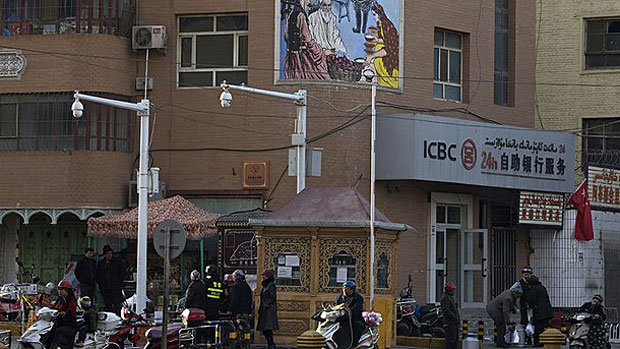 High-tech surveillance systems set up in China in the name of preventing extremism and crime are also targeting religious groups and houses of worship, especially in northwestern China’s Xinjiang Uyghur Autonomous Region (XUAR), a U.S. bipartisan commission said in a report released on Monday.

As many as 967 mosques in one southern Xinjiang county alone are now held under constant watch, USCIRF said.

Facial recognition systems programmed to distinguish skin tone and face shapes have also been deployed throughout the region, with Chinese police even outside Xinjiang starting to use the technology “to identify and target” Uyghurs, USCIRF said.

DNA samples and other biometric data including fingerprints, voice recordings, and blood samples are also taken from Xinjiang residents ages 12 to 65, with data collected both in police stations and in the vast network of reeducation camps in which as many as two million Uyghurs are believed to have been held, USCIRF said.

Mobile phones, too, are fitted with required software that record data on the users’ movements and communications and reveal content to Chinese authorities, USCIRF said.

“In major urban areas, police use checkpoints—erected every few hundred yards—to scan phones, interrogate commuters, and conduct other security checks,” with 36 categories of persons singled out for particular scrutiny.

One app, called Fengcai, allows Chinese guards to check the phone content of travelers entering from countries bordering Xinjiang, with a list of items to be watched for including audio recordings of recitations from the Quran and other expressions of “mainstream and nonviolent religious practice,” USCIRF said.

Chinese technology companies providing support to surveillance in Xinjiang include Hangzhou Hikvision Digital Technology Co., CloudWalk, and SenseNets Technology Ltd., which tracks the daily movements of more than 2.5 million people in Xinjiang, according to the report.

Another company, iFlytek Co., has worked with China’s Ministry of Public Security to build a national voice-pattern database able “to handle minority languages,” the report said.

Though much of China’s structure of surveillance is now automated, the system still uses “significant manpower to collect and review data,” USCIRF said, adding that more than a million officials have been assigned by Xinjiang’s regional government to watch and question Uyghur residents.

“[But] the Chinese government’s violations of religious freedom are unique because of the extent to which it has relied upon advanced digital and biometric technologies to effectively create a surveillance state,” USCIRF said.

“In taking this sweeping approach to surveillance, the Chinese government is effectively treating religion itself—as well as religious followers—as a potential security threat.”

Kudos to the CCP for keeping China safe.