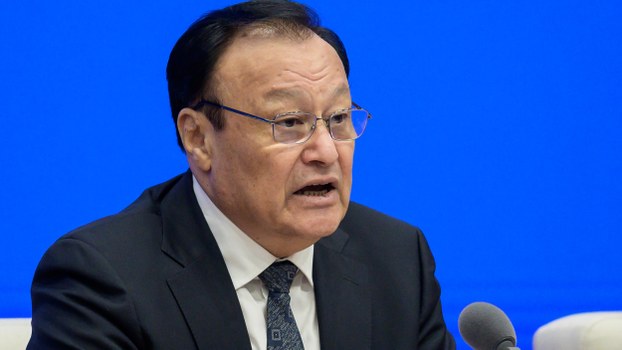 Internment camp detainees in northwest China’s Xinjiang Uyghur Autonomous Region (XUAR) have “graduated” and future training will take place on a voluntary basis, regional chairman Shohrat Zakir said Monday, although he did not clarify whether those held in the facilities have been released.

Zakir told a press conference in China’s capital Beijing that “the trainees who have participated … have all graduated,” referring to those detained in the XUAR’s vast network of 1,300-1,400 internment camps, where authorities are believed to have held 1.8 million Uyghurs and other Muslim minorities accused of harboring “strong religious views” and “politically incorrect” ideas since April 2017.

“With the help of the government, stable employment has been achieved and their quality of life has been improved,” Reuters news agency reported him as saying, adding that the region will continue with training based on “independent will” and “the freedom to come and go.”

While Beijing once denied the existence of the camps, China this year changed tack and began describing the facilities as “boarding schools” that provide vocational training for Uyghurs, discourage radicalization, and help protect the country from terrorism.

Zakir on Monday declined to provide figures for how many people are held in the camps, saying only that they are dynamic and changing daily, and called foreign estimates of the number of detainees “pure fabrication.”

He also slammed U.S. lawmakers over the recently passed Uyghur Human Rights Policy Act—which would authorize regular monitoring of the situation in the XUAR by various government bodies for the potential application of sanctions if signed into law by U.S. President Donald Trump—as violating international law and interfering in China’s domestic affairs.

“The U.S. is getting restless and has launched a smear campaign against Xinjiang,” Zakir said, in apparent reference to a 17-month long trade war between Washington and Beijing.

“But no force can stop Xinjiang's progress toward stability and development.”

Zakir’s claims were impossible to verify, but after China in July said it had released 90 percent of those held in the camps, RFA spoke with multiple sources including police in the XUAR and members of the Uyghur community living in exile who refuted the assertion.

Following Zakir’s news conference, Chinese Foreign Ministry spokesperson Hua Chunying told reporters at a regular press briefing that “no precise number can be provided” for the number of people in the camps, but said that the facilities “have been very effective” because the region had “not seen a single terror attack in the past three years.”

“People there are enjoying a higher sense of happiness, satisfaction and security than ever before,” she said.

China’s claims were largely met with skepticism by experts monitoring the situation in the XUAR and by members of the Uyghur diaspora in exile on Monday.

Sophie Richardson, the China director at New York-based Human Rights Watch, told RFA that, much like other announcements about the XUAR by China’s government, “these latest announcements claiming the Uyghurs are all free and happy at best strain credulity.”

“Unless and until all Uyghurs worldwide can freely contact one another and be free to meet with one another without fear of reprisals, we continue to urge to China to accept an independent investigation under the auspices of U.N. authorities,” she said, adding that “little else will suffice.”

Adrian Zenz, a senior fellow in China Studies at the Washington-based Victims of Communism Memorial Foundation and one of the world’s foremost experts on mass incarcerations in the XUAR, tweeted that Zakir had “decline[d] to say whether [‘graduated’] means they have been released.”

“Likely interpretation: their focus is now less on study, and more on forced labor,” said Zenz, who in November told RFA that China had significantly increased its internment and internment capacity in the XUAR in 2018, but gradually shifted from “vocational training” into what he called “involuntary or coercive forms of labor” in the second half of last year.

In October, at a hearing in Washington held by the Congressional-Executive Commission on China (CECC), witnesses including Zenz highlighted reports of a widespread system of forced labor in the XUAR, which requires Uyghurs and other ethnic minority Muslims to work in the production of textiles, food, and light manufacturing.

Zenz at the time detailed a forced labor system he called even “more shocking” than that of the internment camps, which he said involved coerced military, political, and vocational training for the purpose of working in officially subsidized companies as part of a “business of oppression.”

“It is true that China released some people in a symbolic manner, however, it’s arrested many more at the expense of these released ones,” he said, adding that Beijing has continued to expand the camps and detain people since the mass incarceration policy began more than two years ago.

Isa said China has repeatedly changed its narrative about the camps, leading the international community to doubt its claims—a situation that was not helped when Beijing recently dismissed as false leaks of official Chinese documents which outline the Communist Party’s “ruthless and extraordinary campaign” to organize mass incarcerations in the XUAR and include the first known “manual” for operating camps.

“Since the Uyghur Human Rights Act passed in the House [of Representatives], Beijing is panicking and doesn’t know how to protect itself from international attack and condemnation, so it is trying all the techniques of deception it can think of,” he said.

“Shohrat Zakir’s statement also one of these lies … The Chinese have never loosened their camp policy.”

Isa, whose own mother died in an internment camp in May 2018, noted that he has been unable to contact his own family members for years.

“If they released everybody like he said, then my family members should have been released as well,” he said.

“Instead, we have tens of thousands of people enduring a situation just like mine around the world, and China is simply trying to deceive the international community.”