The businessman in China’s northwest says he is being forced out because of ties to a missing Uyghur.
2012-07-30
Tweet 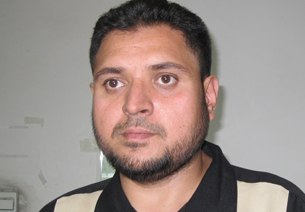 A Pakistani entrepreneur who had spoken out on behalf of a Uyghur employee that disappeared in the aftermath of ethnic unrest in China’s northwestern Xinjiang region is facing eviction by the Chinese company that owns his business's building.

The entrepreneur, Sarfaraz, purchased five floors of the Muhajirlar Hotel in Xinjiang’s capital Urumqi for 9 million yuan (U.S. $1.4 million) in 2004 and spent 3 million yuan (U.S. $469,000) to renovate it into an office complex and living quarters for Pakistani businessmen and travelers.

But the owner of the hotel, Chinese firm Guanghui Co., recently announced plans to fix up the entire hotel, including Sarfaraz’s five floors, and has asked the Pakistani residents to vacate the premises by late August.

“They are terminating the water and electricity on Aug. 20. What right do they have to force us to leave?” he asked.

Sarfaraz said that he had lived in the region for nearly two decades and had poured all of his savings back into the local economy.

“Where am I supposed to go? Where are all the businessmen here suppose to go? I have been here for about 20 years now and I have invested everything I have here.”

Sarfaraz said he believes that local Chinese officials were forcing him out of his property because he had previously spoken with RFA about the fate of his former chef, a Uyghur named Turghun Obulqasim, who was “disappeared” by authorities in the aftermath of 2009 ethnic unrest in Urumqi.

Sarfaraz said he had also been targeted by the authorities for giving assistance to the family of Turghun Obulqasim, who he said was detained by police as he watched helplessly. He has since been under close surveillance and been brought in for questioning “multiple times.”

Chinese authorities imposed a security clampdown in major cities in Xinjiang on July 5, the third anniversary of the start of ethnic violence between Uyghurs and Han Chinese in Urumqi that left 197 dead and hundreds more injured, according to officials statistics.

The Munich-based World Uyghur Congress has said thousands of Uyghurs, mostly men, went missing in the aftermath of the 2009 violence, many of them taken into custody with little or no notice or explanation given to their relatives.

“I believe [I have been targeted], since I have tried to help Turghun’s family. The police have been bothering me nonstop,” Sarfaraz said.

“They ask me what business a foreigner such as me has getting involved with Turghun’s case, and I have told them that it is my moral responsibility to worry about the well-being of my former employee,” he said.

“Ever since getting involved with Turghun’s case, I have constantly run across problems. This is only one of them.” 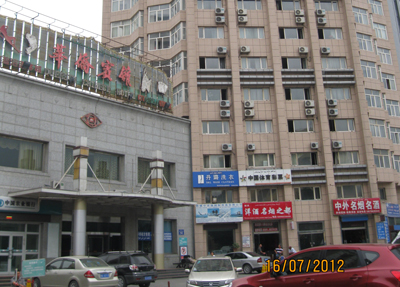 The Muhajirlar Hotel in Urumqi, July 16, 2012. Photo courtesy of Sarfaraz

Sarfaraz said he believes that Guanghui’s decision to renovate the hotel may be a ruse to force him out of the building and to resell his now lucrative real estate to a Chinese company.

He said that the value of his property had increased “significantly” since he purchased it and he feels that Guanghui regretted selling the five floors to him because they are now “bitter that a Pakistani businessman has been able to see such profit in Urumqi.”

“I am not sure whether [Guanghui’s] intention is to really renovate the hotel or to sell it to another company.”

Sarfaraz said that repeated attempts to lodge complaints with regional government offices had yielded no assistance and that the Pakistani Embassy in Beijing said it was unable to help him.

“I have been to all possible government organizations,” he said.

“Of course I have filed a complaint with the embassy, but due to Pakistan’s political relationship with China, they are powerless in this matter and there is nothing they can do for me.”

Sharfaraz added that he was unsure whether the move to push him out was the result of a conflict between Chinese and foreign companies in the region or if the Chinese government was afraid that Pakistani businessmen were funding Uyghur separatists who seek independence from Chinese rule.

Chinese authorities, wary of instability and the threat to the ruling Communist Party's grip on power, often link Uyghurs in Xinjiang to violent separatist groups, including the Al-Qaeda terror network. But experts familiar with the region have said China has exaggerated the threat from Uyghur “separatists” and used its “war on terror” to take the heat off of domestic policies that cause unrest.

Uyghurs say they are subjected to political control and persecution for seeking meaningful autonomy in their homeland and are denied economic opportunities stemming from Beijing's rapid development of the troubled region.

Sharfaraz said entrepreneurs like him should be supported for promoting business growth in the region.

“[The government institutions] should help me because I have invested here and I have helped the local economy," Sharfaraz said.

“I do not think something like this should happen in a civilized country with laws and reason," he said.

At least one analyst has referred to Pakistan’s recent relationship with China as “far beyond that of any other two countries, to the point where Pakistan seems to have lost its independence.”

Within the past 10 years Pakistan has deported at least 200 Uyghurs who fled persecution in China, Uyghur exile organizations say, while Uyghur activists with Pakistani citizenship have been banned from participating in any social or cultural events and more than 10 Uyghur activists in the country have “disappeared.”